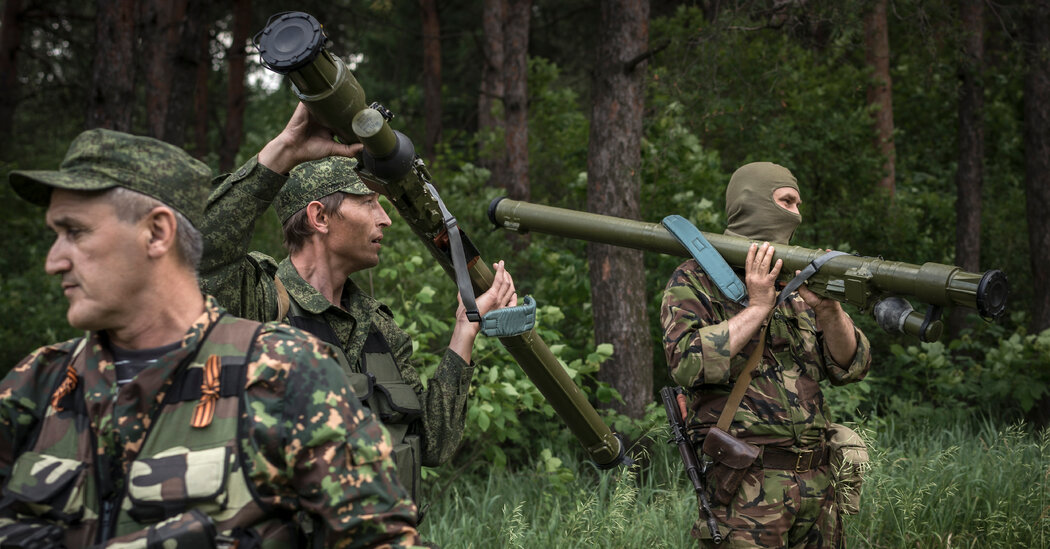 KYIV, Ukraine — A study of weapons and ammunition used in the war in Ukraine shows that Russia has been systematically fanning the conflict with arms shipments, according to a new report funded by the European Union and the German government.

The study is hardly the first to reach this conclusion: the United States and European countries have sanctioned Russia for years for arms transfers to separatist forces they say Moscow is supporting in Ukraine.

But the study is one of the most comprehensive to date on the issue. While unlikely to change the overall picture, it offered a fine-grained view of illicit weapons transfers in Ukraine and illustrated the scope of the arms trade that is fueling Europe’s only active war.

Researchers studied dozens of rifles, grenade launchers, shoulder-fired antiaircraft missiles and thousands of rounds of ammunition taken from captured or killed separatist fighters or positions they had occupied.

The researchers examined the recovered weapons and traced serial numbers and other identifying marks back to manufacturers. It provided “a window into a largely forgotten conflict that, since early 2014, has persisted on the edge of Europe,” the report said.

Titled “Weapons of War in Ukraine,” the report said that the separatist forces “are more than militias armed with weapons inherited from the former Soviet Union; rather, they mimic modern armies and follow established military doctrine.”

The war, fought along an about 280-mile-long trench line that cuts through the flatlands of eastern Ukraine, began after street protesters deposed a pro-Russian Ukrainian president in 2014. Russia responded with a military intervention it has never acknowledged.

The Kremlin has consistently denied transferring arms to Ukraine, even after Western governments documented major weaponry crossing the border. This included a tracked vehicle-mounted antiaircraft missile system that shot down a civilian airliner in 2014, killing all 298 people aboard. Russian officials have blamed Western governments for fomenting the conflict with military support for the Ukrainian government, including the United States’ provision of anti-tank Javelin missiles and Turkey’s supply of Bayraktar armed drones, used for the first time in conflict just last month.

The conflict has again raised alarms this fall. Commercial satellite photographs and videos posted on social media have shown Russian tanks and other armored vehicles close to the Ukrainian border, raising fears of a direct invasion.

And the volume of arms transfers to proxy forces already in Ukraine outlined in the new report highlights the volatility of the situation. The study, conducted by Conflict Armament Research, a company based in Britain that specializes in tracing weaponry, was funded by the European Union and the German Federal Foreign Office.

The study looked largely at small arms, the most basic but often most lethal weapons in wars even when more sophisticated armaments are in use, as is the case in Ukraine.

The study found weaponry that the researchers suggested could have come from nowhere but Russian military arsenals. It found, for example, several types of grenade launchers, sniper rifles and land mines that were never in service with the Ukrainian military, and hence could not have been captured and put to use by the separatist armies. Specialized weaponry also turned up. The researchers say they documented a Russian factory-made “anti-handling” device, or booby-trap, that can be set under a land mine to go off when someone tries to disarm the mine.

More subtle evidence also pointed to separatists having a direct line of support from Russia.

Kalashnikov rifles found in illicit small-arms trade in developing world conflicts, where they are the work-a-day weapon of many militant groups, are typically assembled from parts from multiple guns, the report noted. Mismatched serial numbers on components is common. But that was not the case in eastern Ukraine, the report said: the rifles had matching parts, suggesting a more direct route from factory to battlefield.

The study traced 4,793 rounds of small-arms ammunition and 43 weapons recovered from battlefields from 2014 until 2019. Analysts traced ammunition using “headstamps” or the stamped markings ringing the primers on casings, and weapons by serial numbers. The Russian government and Russian arms manufacturers did not respond to the researchers’ requests for comment.

Though clinical in tone, the report did hint at the grim human drama behind the items being studied.

A rifle that once belonged to a separatist soldier, for example, arrived in front of the British researchers still tied with a ribbon inscribed with Orthodox Christian prayers for protection.

The study of bullets painted a more nuanced picture on sourcing. The entire sample of small-arms ammunition had been manufactured at sites in what is now Russia, the researchers said. The prevalence of a caliber of ammunition used in Kalashnikovs only after 1974 suggested a more modern arsenal. But much had been in storage for years, leaving its provenance uncertain.

The bullets looked at in the study were made over a span of 65 years, the oldest being a round for a Kalashnikov made in 1948, just a year after the rifle was first introduced in the Soviet Union.