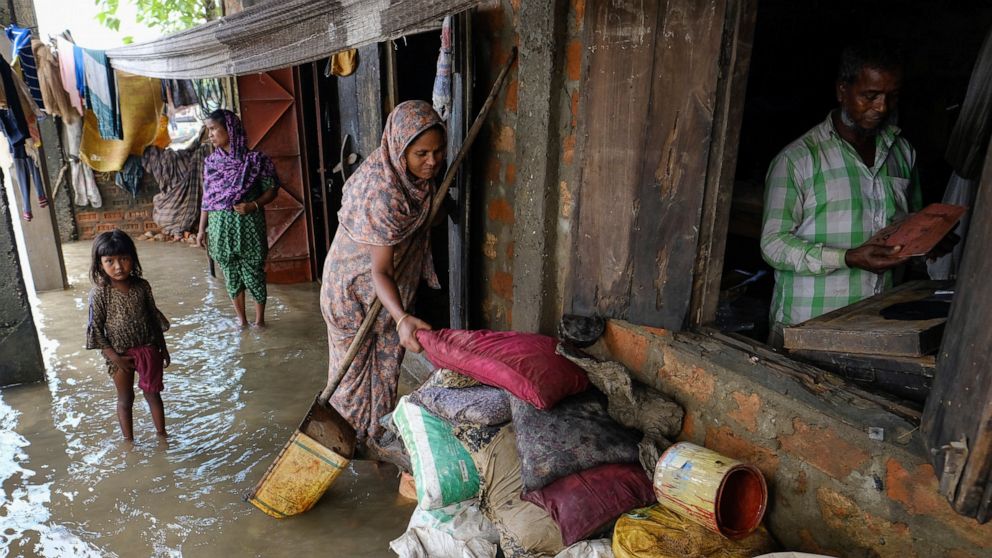 Up to 78 people have died in floods and 17 others in landslides in India’s Assam state, while at least 42 monsoon-related deaths have been recorded in Bangladesh since last month, when floods began ravaging parts of the two South Asian countries, forcing millions to take shelter away from their homes.

Bangladesh’s Flood Forecasting and Warning Center said water in all major rivers in the country’s northeast was receding, but downstream water levels in central and eastern parts of the country could rise over the coming day.

Aid workers said the pace of decline in water levels in the northeast was very slow.

“Yes, it’s going down, but the pace is insignificant,” said Tanvir Rahman Dhaly, an official of non-profit aid agency BRAC.

Dhaly said only 15% to 20% of people in the worst-affected districts of Sunamganj and Sylhet bordering India have left shelters there.

“Children and pregnant women are suffering a lot. They need food, they need care and medical attention,” he said.

“I just visited one family which had three cows before the flood hit. They left them behind and now when they returned home there is no trace of them,” he said.

Other families still have their cattle, but are struggling to provide them with feed.

In India’s Assam state, there was little sign of hope.

“I am touring the worst-hit southern Assam districts today. The army and air force continue to be engaged in relief and rescue operations,” said the state’s top elected official, Himanta Biswa Sarma.

Scientists say climate change has made the monsoon season more variable, with much of the rain normally expected to fall over a year arriving in a space of weeks.

The northeastern Indian state of Meghalaya received nearly three times its average June rainfall in just the first three weeks of the month, and neighboring Assam received twice its monthly average in the same period. Several rivers, including one of Asia’s largest, flow downstream from the two states into the Bay of Bengal in low-lying Bangladesh, a densely populated delta nation.

Every year about 3.5 million Bangladeshis face flooding when rivers overflow their banks, according to a 2015 analysis by the World Bank Institute.

Bangladesh is considered one of the most vulnerable countries to climate change, and the poor are disproportionately impacted. Prime Minister Sheikh Hasina said Wednesday that Bangladesh will have to live with such disasters, so infrastructure should be built to better protect its people.