Water Problems in Syria Give Rise to Deadly Cholera Outbreak 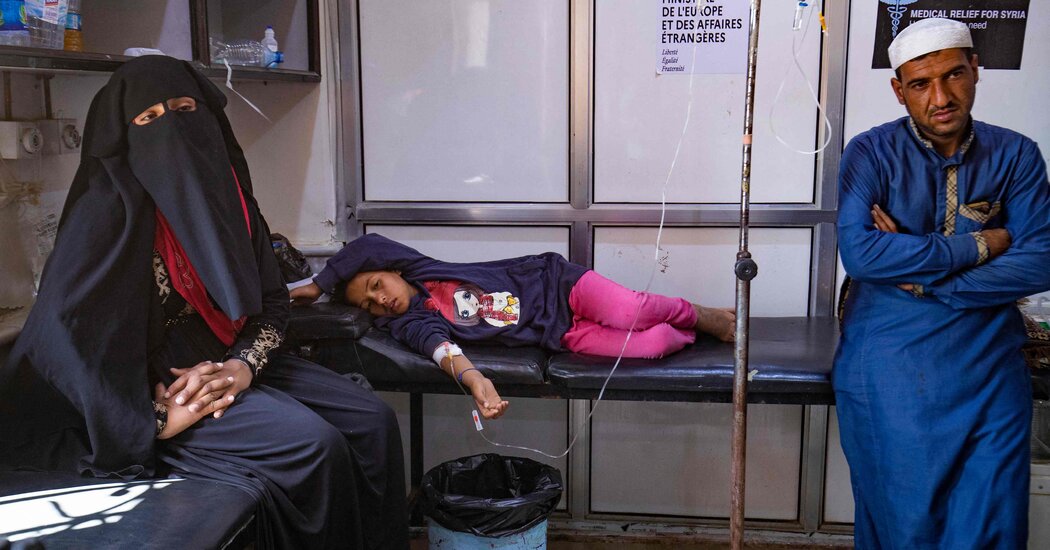 BEIRUT, Lebanon — A deadly cholera outbreak has been spreading in northern Syria over the past two weeks in areas where millions of people displaced by the country’s long civil war are suffering from a lack of clean water and health care, according to aid organizations that have warned of another potential humanitarian crisis.

Save the Children said data provided by the Syrian government indicated there had been 23 cholera-related deaths this week. Health authorities in the autonomous region of northeast Syria, which broke away from Syrian government control in 2013, reported 16 additional deaths. Aid officials said thousands of others are believed to have contracted cholera in the country’s first major outbreak in years.

“The outbreak of cholera threatens more misery for hundreds of thousands of Syrians already at risk from hunger, conflict and the coming winter,” said Tanya Evans, Syria director for the International Rescue Committee. “A decade of conflict has left the health care system in Syria extremely fragile and severely under-resourced, making it much harder to mobilize a response to any potential epidemics.”

After 11 years of war, roughly seven million Syrians are internally displaced and dependent on humanitarian aid. The United Nations has said it expects almost two-thirds of the Syrian population to face food shortages this year, partly because of increased prices linked to the war in Ukraine and a drop in funding for Syrian aid operations.

The humanitarian aid department of the European Commission warned this week of a high risk that the disease could spread further through displaced persons camps in northern Syria.

Cholera is highly contagious and caused by drinking water contaminated by feces or by eating food grown or prepared with contaminated water. It causes severe diarrhea and vomiting, which if left untreated, can result in fatal dehydration. A 2010 outbreak in Haiti killed almost 10,000 people. It was linked to a river contaminated with sewage and came months after a devastating earthquake there.

Years of drought in Syria coupled with extensive damage to the country’s infrastructure have left millions of Syrians short of clean water and lacking access to basic health care.

REACH, a U.N.-linked research and information service, said in areas in northern Syria with large populations of displaced people, at least half of all sewage systems are out of order. It said in makeshift housing in Deir al-Zour province, 40 percent of residents reported that they did not have access to toilets.

In many places, raw sewage is pumped directly into the Euphrates River. Groundwater levels have declined and major pumping stations are inoperable. With no clean drinking water, many people rely on supplies of water trucked in — often untreated river water.

Water levels in the Euphrates have dropped after years of drought, leading to a higher concentration of bacteria, according to REACH.

Turkey, which invaded northern Syria in 2016, controls the water level of the Euphrates through dams inside Turkish territory. It also controls the main Alouk pumping station in northeastern Syria, which services roughly one million people and is frequently out of order.

The U.N.’s World Health Organization said it had received a shipment of diagnostic tests and treatment in the Syrian capital, Damascus, to be distributed throughout Syria.

But aid organizations say that humanitarian aid received in territory controlled by the Syrian government is slow to be distributed to areas of the country held by opposition groups, such as the Kurdish-led administration of northeastern Syria.

Syria’s ally, Russia, in July vetoed a U.N. measure that would have allowed aid to flow into northwestern Syria from neighboring Turkey, arguing that the measure violated Syrian sovereignty.