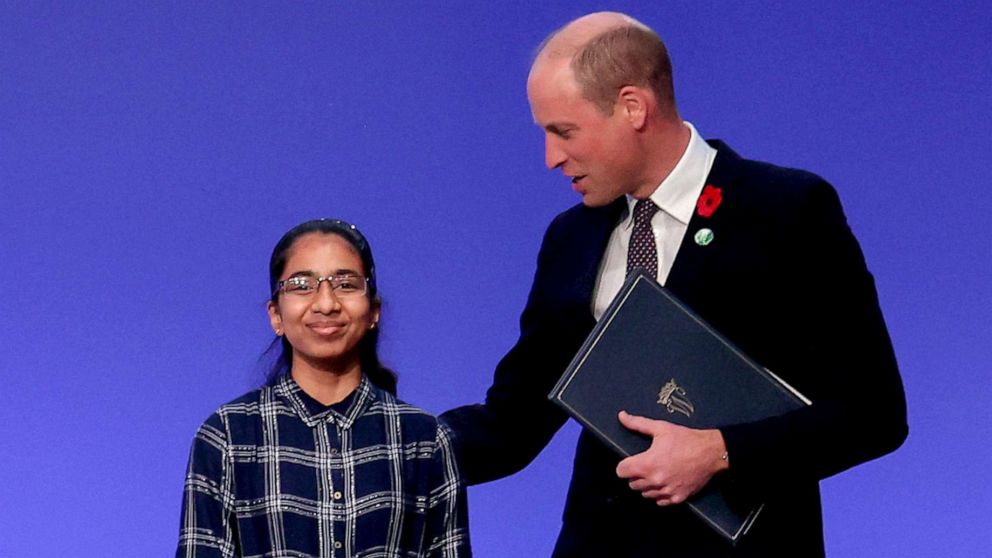 The winners show climate solutions could be just around the corner.

Eshrat Waris called just attending the COP26 climate summit and meeting Prince William in Glasgow, Scotland, this week an “out of body experience.” Being handed 1 million pounds for her Earthshot Prize-winning invention took it to another level.

“The fact that we’re in the room means that — I hope to God — they unlock that money because there are solutions like the 15 Earthshot finalists have shown,” Waris told ABC News. “But that financing that has been promised since Paris, I hope to God in Glasgow gets delivered and unlocked for all of us because these solutions are going to be game-changers.”

The 34-year-old from Bangladesh was one of five winners of the prince’s inaugural Earthshot Prize, each of whom received 1 million pounds, or about $1.38 million, in financial support. All 15 finalists received some funding to scale their climate change solutions.

Waris won the award for a smartmeter that allows people to sell excess solar energy developed by SOLshare where she is the director of product and business development.

Acknowledging the global scale of COP26, Olugbenga Olubanjo, a winner from Nigeria, told ABC News, “I’m very sure it’s going to unlock opportunities for us. … It sets us on the global stage.”

The three winners who spoke to ABC News were optimistic and determined to bring climate change to an end.

“Failure is not an option when it comes to solving for climate change,” Teicher said.

He also pointed to the world’s response to the pandemic as an example of the power we harness to create change.

“You saw during the COVID lockdowns that governments can unlock incredible amounts of funding to restructure societies,” Teicher said. “So the argument that there’s not enough money to fund climate change action is now underscored by the fact that the cost of inaction is so much greater than paying the bill right now, while then also creating all these opportunities through new solutions.”

And while the group said it was humbled and honored to be working with Prince William, the winners said they were also amazed by Prince Charles.

“We had the opportunity to meet Prince Charles the other night, and I honestly was very surprised and pleasantly blown away by how much this man knows,” Waris said.

“He got so excited,” Waris added. “He was actually grabbing the CEOs and saying, ‘Hey, come over here. Like, these guys, like, you need to finance them right now.'”

The finalists and winners met for the first time in person and were featured at a leaders’ event on Tuesday where William gave a speech.

Umashankar reached the final rounds of the prize for her invention, which replaces India’s traditional charcoal-powered roaming ironing carts with ones powered by solar energy.

“We won’t wait for you to act,” Umashankar added in her speech, earning her a standing ovation. “We will lead even if you don’t. We will act even if you delay.”

Kremlin on Boris Johnson: we don’t like him either