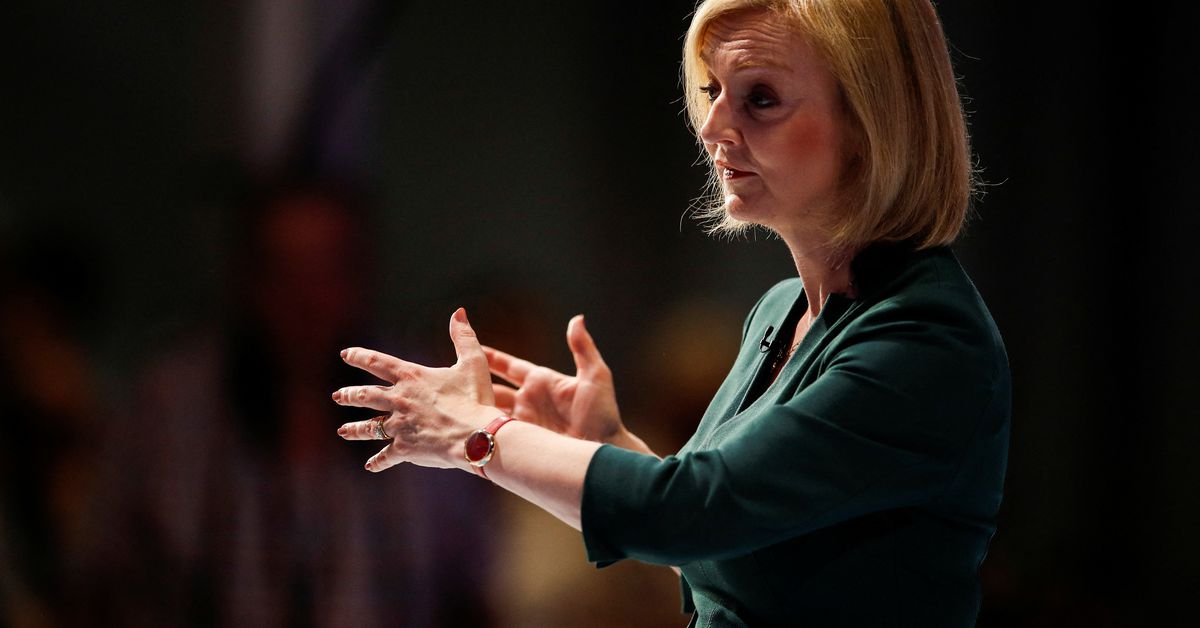 LONDON, Aug 6 (Reuters) – Liz Truss, the front-runner to become Britain’s next prime minister, plans to rush through tax cuts earlier than planned in an attempt to boost the country’s flagging economy, the Sunday Telegraph reported.

Truss was considering accelerating by six months her plan to reverse this year’s increase in social security contributions which had been pencilled in for April 2023, the newspaper said.

Advisors to Truss believed the cut could be introduced within days of an emergency budget that her government would deliver in September, if she wins the ruling Conservative Party’s leadership race that is due to end on Sept. 5, it said.

The BoE has also said Britain is due to enter a 15-month recession starting later this year, something Truss says adds urgency to her plan to cut taxes.

Truss, writing in the Sunday Telegraph, said she wanted to “immediately tackle the cost of living crisis by cutting taxes, reversing the rise on National Insurance and suspending the green levy on energy bills.”

Sunak proposes a different approach by giving support directly to lower-income households that are most exposed to the surge in power bills which will rise sharply again in October.

On Saturday, he reiterated that he wanted to “go further” than the support he provided as finance minister before he resigned in protest at the leadership of Prime Minister Boris Johnson in July.

“It’s simply wrong to rule out further direct support at this time as Liz Truss has done and what’s more her tax proposals are not going to help very significantly, people like pensioners or those on low incomes,” he said.

A recent poll by YouGov showed Truss held a 24-point lead over Sunak among Conservative Party members who will choose the party’s next leader and Britain’s next prime minister.

In her Sunday Telegraph article, Truss kept up her criticisms of the BoE, saying it had exacerbated the jump in inflation and she would “work night and day” to fix the problem.

“That is why I want to look around the world at what the best performing central banks are doing to control inflation and how we can ensure our Bank is delivering what we need it to deliver,” she said.

BoE Governor Andrew Bailey has denied the BoE is to blame for the inflation surge, saying it began to raise interest rates earlier than other central banks and most of the recent acceleration of prices stems from Russia’s invasion of Ukraine.