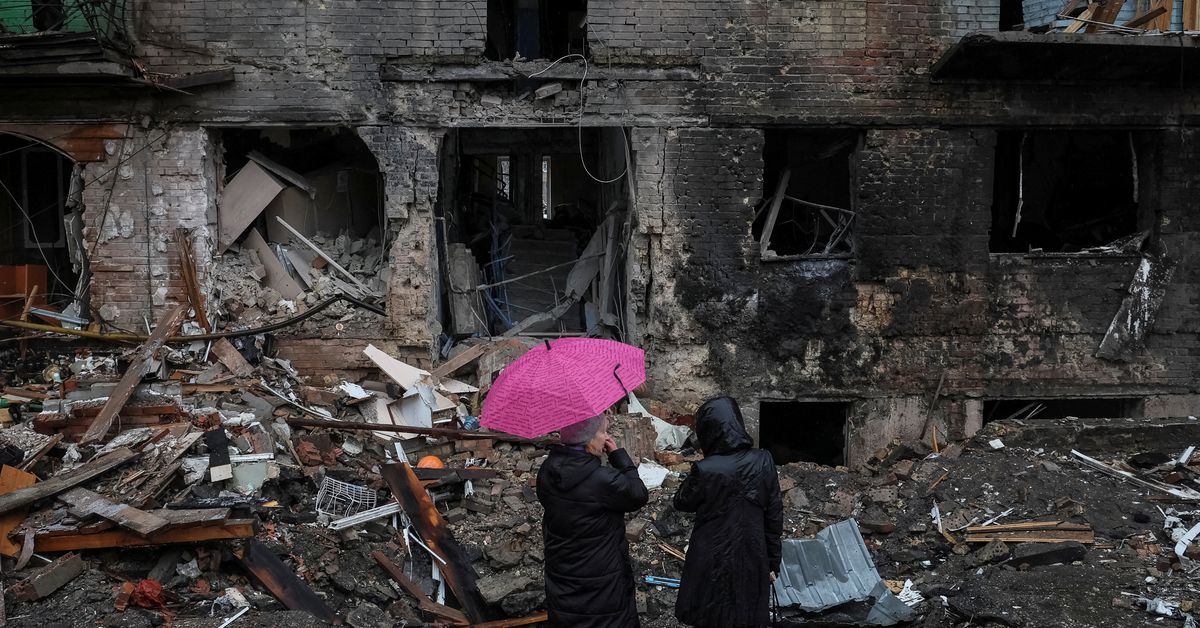 KYIV, Nov 24 (Reuters) – Much of Ukraine on Thursday remained without heat or power after the most devastating Russian air strikes on its energy grid so far, and in Kyiv residents were warned to brace for further attacks and stock up on water, food and warm clothing.

Thursday marked nine months to the day since Moscow launched what it called a “special military operation” to protect Russian-speakers. Ukraine and the West say the invasion is an unprovoked war of aggression.

Since early October, Russia has launched missiles roughly once a week in a bid to destroy the Ukrainian power grid.

Moscow acknowledges attacking basic infrastructure, saying it aims to reduce Ukraine’s ability to fight and push it to negotiate. Kyiv says such attacks are a war crime.

“Together we endured nine months of full-scale war and Russia has not found a way to break us, and will not find one,” President Volodymyr Zelenskiy said in a nightly video address.

Zelenskiy also accused Russia of incessantly shelling Kherson, the southern Ukrainian city that it abandoned earlier this month. Seven people were killed and 21 wounded in a Russian attack on Thursday, local authorities said.

Viewed from space, Ukraine has become a dark patch on the globe at night, NASA satellite images showed.

Zelenskiy said that while power, heat, communications and water were being restored gradually, problems still existed with water supplies in 15 regions.

Ukrenergo, which oversees Ukraine’s national power grid, said 50% of demand was not being met as of 7 p.m. Kyiv time (1700 GMT).

In the capital Kyiv, a city of three million, 60% of residents were without power amid temperatures well below freezing, mayor Vitaly Klitschko said.

“We understand that missile strikes like this could happen again. We have to be ready for any developments,” he added, according to Kyiv city council.

Authorities have set up “invincibility centres”, where people can charge phones, warm up and get hot drinks.

“It is the second day we are without power and food. More than 60 children are waiting for food and we cannot prepare anything unless power gets fixed,” said a woman at one such centre in Kyiv.

Russia’s latest barrage killed 11 people and shut down all of Ukraine’s nuclear plants for the first time in 40 years.

[1/22] Local residents stand near their building destroyed by a Russian missile attack, as Russia’s attack on Ukraine continues, in the town of Vyshhorod, near Kyiv, Ukraine November 24, 2022. REUTERS/Gleb Garanich

Zelenskiy told the Financial Times that this week’s strikes had created a situation not seen for 80 or 90 years – “a country on the European continent where there was totally no light.”

By early evening, officials said a reactor at one nuclear plant, Khmelnytskyi, had been reconnected to the grid.

Kremlin spokesman Dmitry Peskov said it was Kyiv’s fault Ukrainians were suffering because it refused to yield to Moscow’s demands, which he did not spell out. Ukraine says it will only stop fighting when all Russian forces have left.

Nuclear officials say interruptions in power can disrupt cooling systems and cause an atomic disaster.

More than 15,000 people have gone missing during the war in Ukraine, an official in the Kyiv office of the Hague-based International Commission on Missing Persons (ICMP) said.

The ICMP’s programme director for Europe, Matthew Holliday, said it was unclear how many people had been forcibly transferred, were being held in detention in Russia, were alive and separated from family members, or had died and been buried in makeshift graves.

Moscow shifted to the tactic of striking Ukraine’s infrastructure even as Kyiv has inflicted battlefield defeats on Russian forces since September.

The war’s first winter will now test whether Ukraine can press on with its campaign to recapture territory, or whether Russia’s commanders can halt Kyiv’s momentum.

Zelenskiy said that in some areas Ukrainian troops were preparing to advance but gave no details.

Having retreated, Russia has a far shorter line to defend to hold on to seized lands, with more than a third of the front now blocked off by the Dnipro River.

Russia has pursued an offensive of its own along the front line west of the city of Donetsk, held by Moscow’s proxies since 2014. Ukraine said Russian forces tried again to advance on their main targets, Bakhmut and Avdiivka, with limited success.

Reuters could not immediately verify the battlefield accounts.