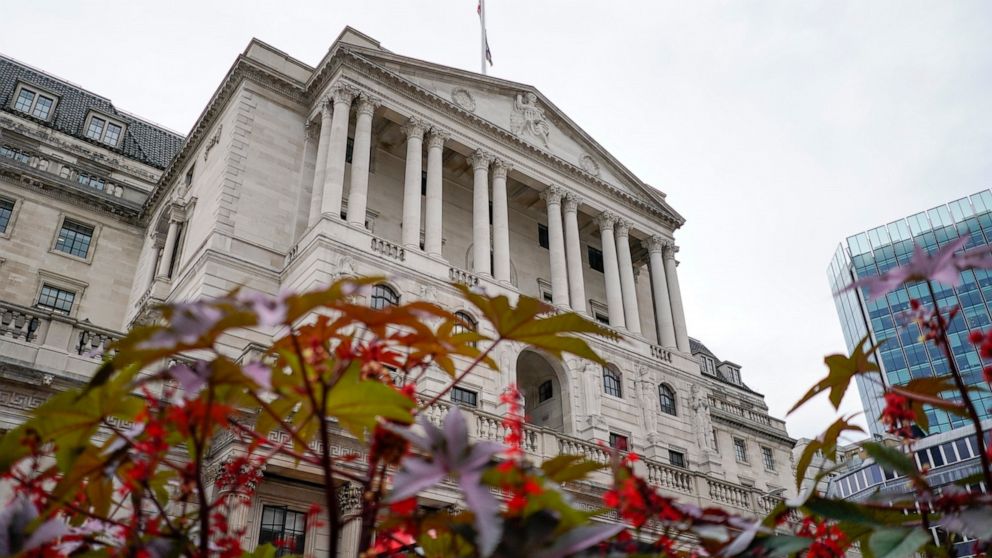 The Bank of England is widely expected to raise interest rates in order to combat rising inflation, a move that is likely to make mortgages and loans more costly

LONDON — The Bank of England is widely expected to raise interest rates Thursday in order to combat rising inflation, a move that is likely to make mortgages and loans more costly.

Financial markets think the bank is more likely than not to raise its main interest rate from the record low of 0.1% to 0.25% to rein in surging consumer prices stemming from high energy costs, labor shortages and other factors as the global economy recovers from the pandemic.

If the Bank of England does raise rates, it would be the first central bank among the Group of Seven leading economies to do so. On Tuesday, the U.S. Federal Reserve left interest rates unchanged as it announced it would start winding down the stimulus program it put in place during the pandemic to keep a lid on inflation.

A number of policymakers on the Bank of England’s nine-member rate-setting panel have voiced concerns about the increase in consumer prices, stoking expectations of an imminent rate hike. The hope would be that an early rate rise would keep a lid on the peak in inflation.

Even if the Bank of England doesn’t increase interest rates Thursday, there’s an expectation that the bank’s rate-setting Monetary Policy Committee would indicate that it is ready to raise rates at its next meeting just before Christmas.

Though the headline measure of consumer price inflation dipped slightly in September to 3.1%, it remains more than a percentage point above the Bank of England’s government-mandated target of 2%. It is also expected to rise further in coming months, with or without a rate hike.

In the past, the rate-setting panel has sometimes held off from raising interest rates if it judged the increase in prices to be tied to temporary phenomena. Some of the current inflation increase is because of temporary factors, including comparing prices to those from a year ago when they had slumped in the early months of the pandemic.

However, there are signs that the rise in inflation is becoming embedded in the British economy through higher wage increases.

20,000 feared dead in earthquake carnage as rescuers race against time to save trapped victims