Tunisians protest against president, as journalists complain of police abuse 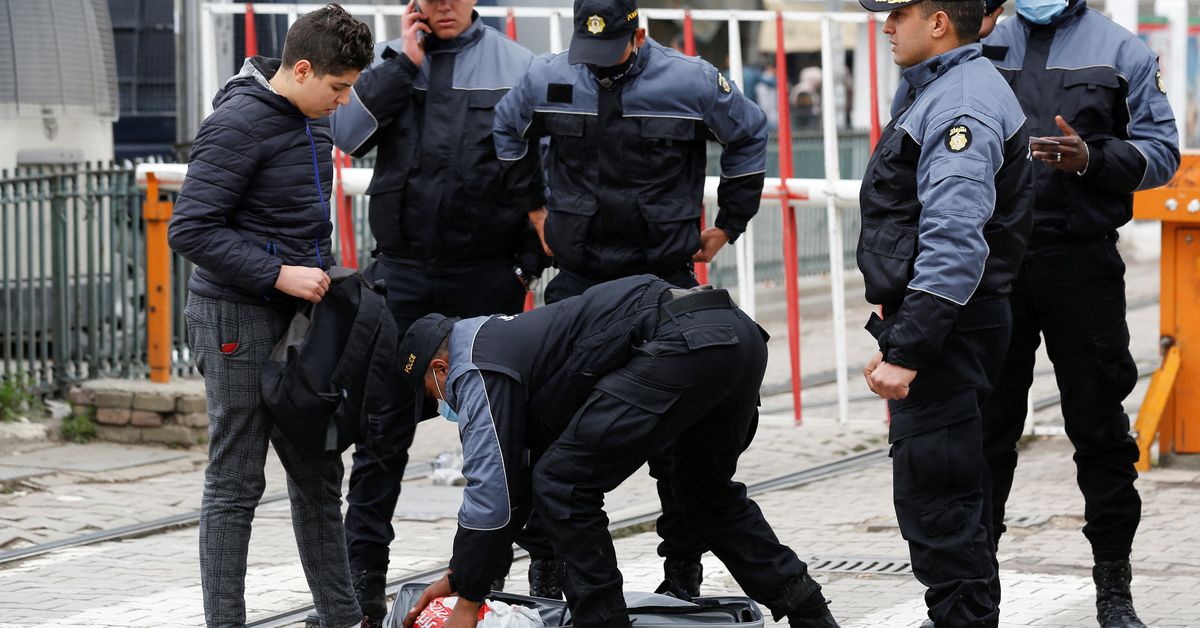 TUNIS, Jan 14 (Reuters) – Tunisian police sprayed water cannons into crowds and beat back protesters withbatons as they dispersed more than 1,000 demonstrators trying to reach central Tunis on Friday, while journalists covering the protests against the president complained of police violence and abuse.

A heavy police presence prevented many protesters who were demonstrating against President Kais Saied from gathering in Habib Bourguiba Avenue, the main street in central Tunis that is the traditional focal point for protests, including during the 2011 revolution that brought down former President Ben Ali Zine El Abidine and ushered in a period of democratic transition.

On Jan. 14th, the 12th anniversary of the date of Ben Ali’s exile and formerly a national holiday in Tunisia, police dispersed several different groups of protesters, at least one of which had hundreds of demonstrators, Reuters witnesses said, kicking and pushing them to force them back. Reuters images shows police firing water cannons at people sitting down in the street.

The Interior Ministry said 1,200 people had protested and said its forces had exercised restraint.

“Today Saied’s only response to opponents is with force and the security forces… it is so sad to see Tunisia like an army barracks on the date of our revolution,” said opposition activist Chayma Issa, referring to the large presence of security forces.

Opposition parties are protesting against President Saied’s suspension of parliament last year, and his assumption of executive power and moves to rewrite the constitution, which they call a coup.

“Preventing free Tunisians from protesting on the revolution anniversary is shameful… and is an attack on freedoms and represents a big decline under the coup authorities,” said Imed Khemiri, an Ennahda member of the suspended parliament.

REPORTS OF ATTACKS ON THE PRESS

The French newspaper Liberation said that its reporter in Tunisia Mathieu Galtier was subjected to severe violence by policemen when he was filming a violent attack on a protester and they confiscated his phone later.

“They started hitting me, I was on the ground, curled up in a fetal position. I was screaming that I was a journalist. One of them doused me with gas … They kicked me and they took my phone, my press card,” the newspaper quoted its reporter.

Hakaekonline, a local news website, said also that the police seized the phone of its correspondent and viewed her private messages and photos while she was filming during the protest.

Earlier on the day, the owner of the Business News newspaper Nizar Bahloul said that a videographer was arrested before he was later released.

The interior ministry was not immediately available for comment on these allegations.

Friday’s protest was in defiance of a ban on all indoor or outdoor gatherings the government put in place on Tuesday to address a new wave of COVID-19 cases.

Though Saied’s assumption of power in July appeared popular at first among some Tunisians after years of economic stagnation and political paralysis, growing demonstrations indicate he has since lost some support.

Tunisia’s economy remains mired by the pandemic, and there has been little progress in gaining international support for the fragile public finances, while the government Saied appointed in September has announced an unpopular 2022 budget.

Friday falls on what Tunisians had previously marked as the anniversary of the revolution, the day former autocratic Ben Ali fled the country. Saied decreed last year the anniversary would fall on the December date of a street vendor’s suicide that triggered the uprising.

Australia has decided to ‘let Covid rip.’ Is that a good idea?