Torn From Parents in the Belgian Congo, Women Seek Reparations 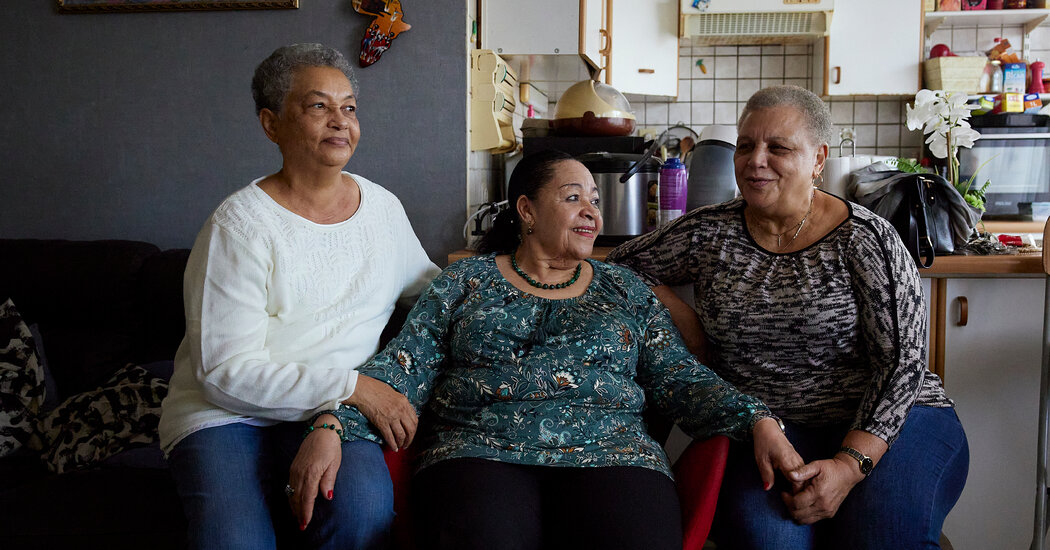 BRUSSELS — The girls were as young as 2, some still breastfeeding, and no older than 4 when they were taken from their mothers.

Like thousands of other mixed-race children born under colonial rule in Belgian Congo, the five girls, the children of African mothers and European fathers, were taken from their homes by the authorities and sent to religious schools hundreds of miles away, growing up in poverty and suffering from malnutrition and physical abuse.

The victims of a segregationist policy of the Belgian authorities who ruled a vast territory in Africa that now includes Burundi, the Democratic Republic of Congo and Rwanda, they kept their childhoods a secret for decades, even from their own families. Now women in their 70s, they listened to their stories being told in public by their lawyers on a recent morning in a small courtroom in Brussels packed with dozens of spectators.

“Their names, their origins and identities were stripped from them,” said one of the women’s lawyers, Michèle Hirsch. “What they shared with me is not in the history books.”

The women — Monique Bintu Bingi, Marie-José Loshi, Simone Ngalula, Léa Tavares Mujinga and Noelle Verbeken — are seeking reparations and suing the Belgian state for crimes against humanity for the segregationist policy that stripped them from their mothers — one that endured from the end of the 19th century to Congo’s independence in 1960 and even after. A verdict is expected later this month.

Unions between African women and European men were forbidden under Belgian rule in Congo, and the authorities went to drastic lengths to ensure the primacy of whites.

“No remedy” was “radical enough to avoid the creation of métis,” as Joseph Pholien, an architect of Belgium’s colonial rule who later became prime minister, put it in 1913, using the French word for mixed-race children.

Belgian civil servants snatched some children from their families, or coerced the parents of others into handing over their children to Catholic institutions cooperating with the state. A minority of these children was sent to Belgium, while most stayed in Congo. Their father, they were told, was “Papa l’État,” our father, the state.

As Belgium grapples with its colonial past, critics say it has mostly taken symbolic measures that do little to address the trauma. In 2018, the country renamed a square after Patrice Lumumba, a Congolese leader it helped overthrow in a coup that led to his death, and revamped a museum that celebrated colonialism. Last year, the authorities removed some statues of King Leopold II, whose rule over Congo led to the deaths of millions through forced labor and famine. King Philippe of Belgium has also expressed his “deepest regrets for the wounds of the past,” but stopped short of apologizing.

In 2019, the Belgian government apologized for the systematic kidnapping, segregation, deportation and forced adoption of biracial children during its colonial rule. The Catholic Church and the Parliament also apologized for the practice. Yet little remains known about its scale and the children’s stories. Many never saw their parents again and have no administrative documents from their childhood.

For the five plaintiffs, the state’s apologies are not enough. “We can’t die without telling people what the Belgian state did to us,” Ms. Bintu Bingi told the judge at the hearing this month. The women are each requesting compensation of 50,000 euros, about $55,000.

“The Belgian state did not have the courage to go all the way, because naming the crime would have made it responsible and incurred reparations,” Ms. Hirsch said about the apologies. “Apologies for history, yes, but reparations to the victims, no.”

The Belgian government declined to comment on the trial. A spokeswoman for the foreign ministry said embassies were assisting those looking for the identities of their biological parents, and financing research on mixed-race children.

The kidnapping and deportation of biracial children by Belgium under colonial rule echo policies against Indigenous and aboriginal children in other countries like Australia, Canada, and the United States.

In Australia, after a lawsuit was launched earlier this year against the government, the authorities announced a $56,000 payment scheme for some survivors of the “Stolen Generations,” who as “half-caste” children were taken away from their families and put into church-run compounds from the 1900s to the 1970s.

In Canada, a national commission concluded that a government’s residential school program that separated at least 150,000 Indigenous children from their families from 1883 to 1996, amounted to “cultural genocide.” The discoveries earlier this year of hundreds of unmarked graves of children who died in the schools has prompted a new reckoning over the government’s historical policies.

The number of children taken away from their families in Belgium’s former Central African territories is in the thousands, but historians are hesitant to provide a firm estimate. What is clear is that mixed-race children were seen as a threat, according to Delphine Lauwers, the lead archivist of Résolution Métis, a state-run research project created after the Belgian Parliament apologized in 2018.

“Interbreeding was upsetting a binary colonial system whose basis was the superiority of the white race over the Black race,” Ms. Lauwers said. “So the Belgian state decided to confine the mixed-race children in an in-between, a liminal space, where they were excluded from both categories.”

The five plaintiffs grew up together in a Catholic school in Katende, in what is the province of Kasai in the Democratic Republic of Congo today. Ms. Tavares Mujinga, one of the plaintiffs, said she and her fellow students lived like prisoners, with insufficient clothing and food. In letters sent to the regional authorities in the early 1950s and seen by The New York Times, the nuns warned about a lack of food, and the insalubrious dormitory and canteen.

Ms. Tavares Mujinga said a scar on her forehead comes from a nun who hit her when she was 5, and that the scars on her legs are from ulcers she got from malnutrition. But the deepest scars are psychological, she said. When Ms. Tavares Mujinga came back to her family as a teenager, her mother told her she had been forced to abandon her to avoid reprisals from the authorities.

Following Congo’s independence in 1960, some of the youngest children were abandoned to a militant group after the nuns left the area. Many of the girls were raped, according to Ms. Bintu Bingi.

“These are not stories you can tell your children,” Ms. Bintu Bingi said in an interview as she recalled how she opened up to her daughter in recent years. “The Belgian state destroyed us, psychologically and physically.”

The women moved to Belgium in the 1980s and later and all live there, except for one who moved to France.

Some legal experts are divided on whether the forced separation of the mixed-race children from their mothers amounts to crimes against humanity. Ms. Hirsch, the plaintiff’s lawyer, argued that it did, because Belgium had tried to wipe out the civil existence of métis children.

Emmanuel Jacubowitz, a lawyer representing the Belgian state at the hearing, said the authorities didn’t deny that the policy was racist and segregationist, but that it wasn’t seen as violating fundamental rights at the time.

Eric David, a professor of international law at the University of Brussels, said it was a stretch to call the practice crimes against humanity. “There was deportation, detention, and what could amount to torture,” Mr. David said. “But there were no slavery, murder, or systemic rapes in those schools.”

Mr. Jacubowitz added that hundreds of similar requests for compensation could follow.

“It may be that Belgium’s fear is to open the tap for reparations,” said Ms. Lauwers, the archivist.

Déborah Mbongu, the granddaughter of Ms. Tavares, said she struggled to understand why Belgium was so reluctant to pay. The plaintiffs say they didn’t sue for money, but Ms. Mbongu, 23, said it was essential her grandmother and others were recognized as victims.

“For our shared history,” she said, “a crime must lead to reparations. It’s just fundamental.”