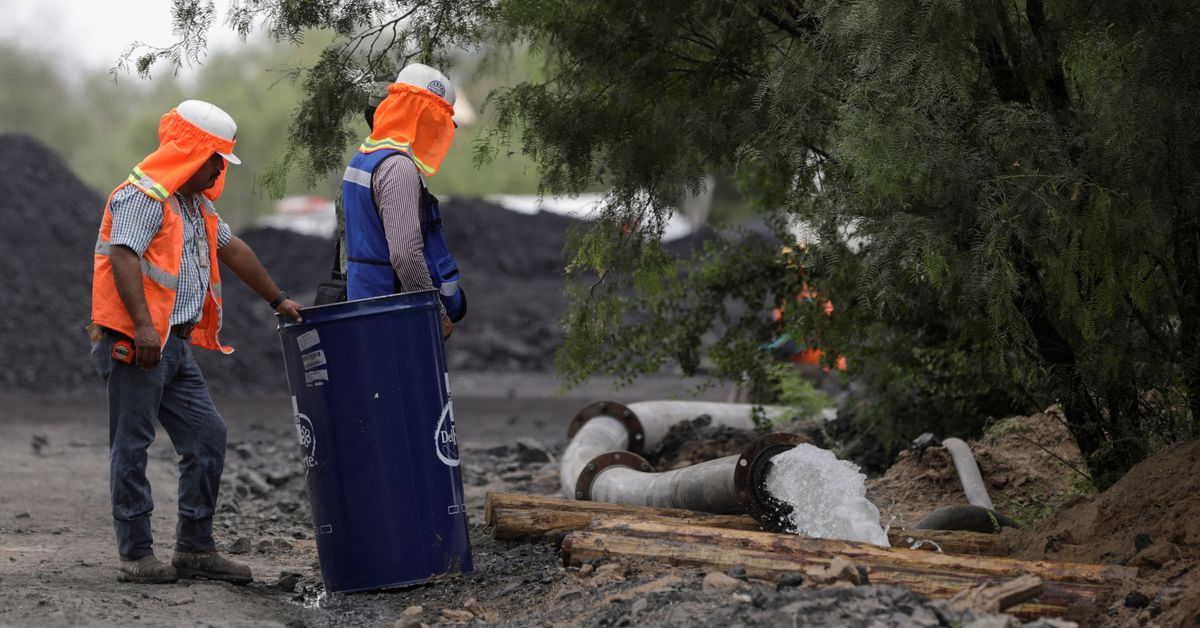 SABINAS, Mexico, Aug 6 (Reuters) – Large pumps sucked water from a flooded coal mine in Mexico on Saturday as authorities weighed whether to send divers to try to save 10 miners who have been trapped underground for more than three days.

The miners became trapped at a mine in the northern border state of Coahuila on Wednesday afternoon when their excavation work caused a tunnel wall to collapse, triggering flooding in three wells.

President Andres Manuel Lopez Obrador said Saturday would be “decisive” in determining whether divers could safely enter the mine. But by afternoon, Coahuila Governor Miguel Riquelme said water levels were still too high.

“Time is against us,” he told families at the site, Mexican media reported.

Relatives keeping vigil outside said they were pinning their hopes on the possibility the miners had found a pocket of air. read more

“We’re tired, we’re desperate, but with a little bit (of) hope,” said Cecilia Cruz, adding that she had heard about mining accidents in her native Coahuila for decades before the incident that trapped her nephew, 42-year-old Sergio Cruz.

The possibility of mud-filled tunnels and underground collapses could make it impossible for rescue teams to search for the miners, even if enough water is extracted, she noted.

Members of rescue teams work at the site of a coal mine where a mine shaft collapsed leaving miners trapped, in Sabinas, Coahuila state, Mexico, August 6, 2022. REUTERS/Luis Cortes

“Do they want to risk more lives? It would be an even bigger tragedy,” she said.

Six divers from Mexican Special Forces were sent to aid the effort at the mine, where three wells, each 60 meters (200 feet) deep, were initially more than half-flooded.

Five miners managed to escape. One, Fernando Pompa, recounted in an interview with a Coahuila radio station how he was hauled above ground in a cart used to transport coal after the accident unleashed a huge gush of water.

“The hope is that there’s a little bubble of air,” he said.

The mine, in the municipality of Sabinas, opened in January and had no “record of complaints for any type of abnormality,” according to the Labor Ministry.

Sergio Martinez, whose brother Jorge Luis Martinez, 34, is trapped, said workers above ground told him they heard a thundering noise accompanied by an jet of air when the accident happened. They raced to the mine and threw down a rope, pulling up workers by hand, but didn’t reach Jorge Luis.

“We hope there’s a miracle so he gets out alive,” Martinez said.

Reporting by Luis Cortes in Sabinas; Daina Beth Solomon and Marion Giraldo in Mexico City; Editing by Will Dunham and Jonathan Oatis