‘Things are still not safe’: Locals fear returning to scarred villages of Kharkiv despite Russian retreat 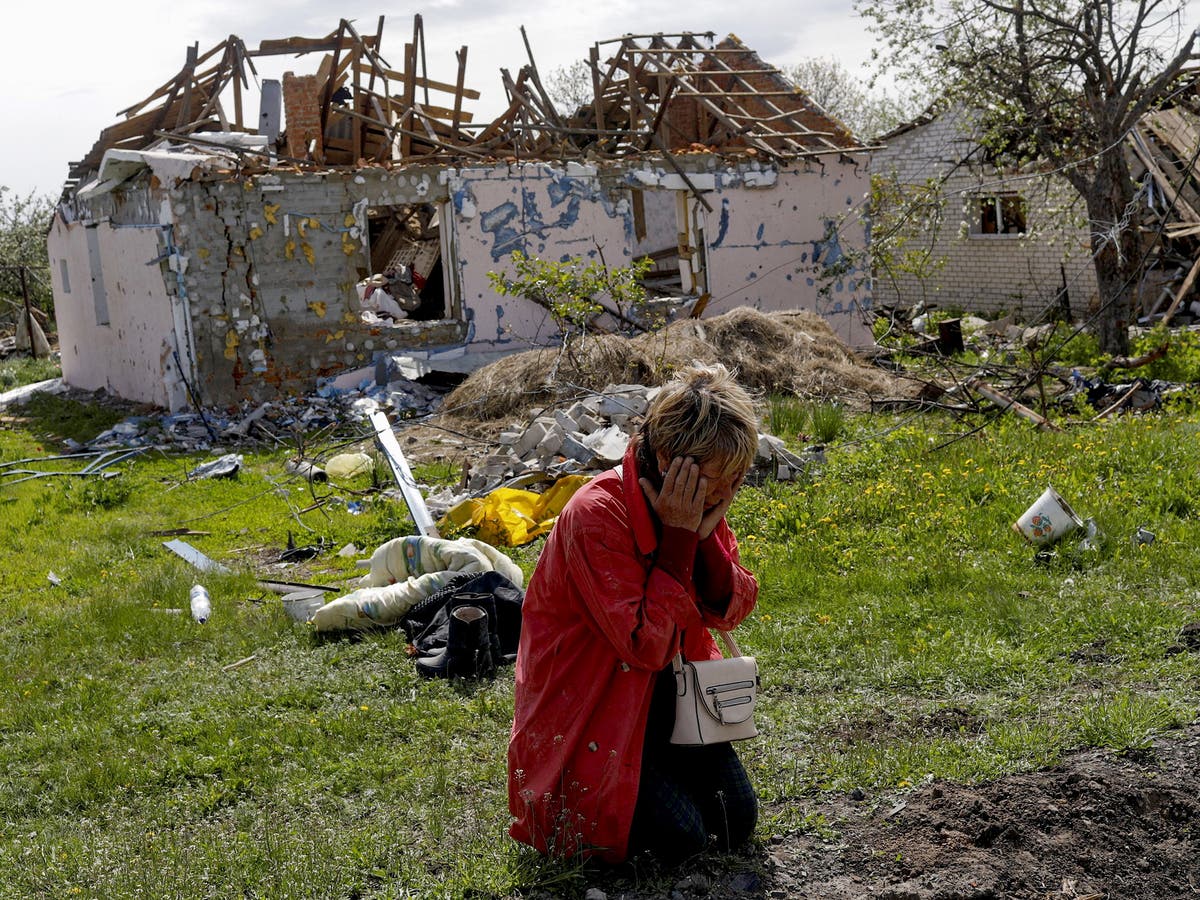 Denis Kozmenko decided to flee his home with his young family after seeing a young mother taking shelter in a school during air strikes being dragged off to be raped by a Russian soldier.

He was among the many households who decided to move their wives and daughters out of the village of Mala Rohan, under Russian occupation, after the horrific sexual assault on the 27-year0-old woman.

“I saw what happened that night. This poor woman was taken away in front of her family, dozens of people by this soldier. I realised then that there was no safety, no safety at all,” said Mr Kozmenko, who has returned to the village after it was recaptured by Ukrainian forces.

“We have a 14-year-old daughter, and of course I was worried. We left our homes the next day and my family has not come since, I am not going to bring them back for the time being, things are still not safe here, for all kinds of reasons.”

The Independent reported the rape at Mala Rohan, near Kharkiv in northeastern Ukraine, at the end of March as accounts began to emerge of widescale sexual violence following the Russian invasion.

The first trial for rape during the conflict is due to start in Kyiv in the coming days. A Russian soldier, named as Mikhail Romanov, will be charged in absentia with assaulting a woman after shooting her husband dead.

The victim, who has a five-year-old daughter, suffered knife wounds during the attack which began after a drunken Russian soldier burst into a village school where residents had taken refuge during fierce fighting.

The rapist, a 19-year-old trooper called Vladimir, was arrested and taken away by Russian forces after being identified by local people. Russian officers subsequently claimed that the attacker had been summarily executed.

The victim’s family left the villager after the attack and do not intend to return. Inna Schneider, their next door neighbour, said “we don’t blame them at all, why would you want to come back to a place with such memories? The decision to move young women afterwards was right, ten left from just this road. We have heard tales of what has happened to women at other places as well.

“A lot of families are not coming back at the moment. They are worried about a lot of things, people don’t want to make the wrong choice and regret it despite the Russians going.”

The failure to take Kharkiv, just 25 miles from the Russian border, was a huge blow to Vladimir Putin’s attempts to dismember Ukraine.

The country’s second city, 74 per cent Russian speaking, fought back against repeated attempts by Russian forces to storm it and then resisted a prolonged siege and relentless missile and artillery strikes.

What is taking place now is being viewed as a key turning point in the course of the war. Ukrainian forces have driven back the Russians, retaking Mala Rohan and adjoining areas.

But people who have fled these communities during the fighting are hesitant about moving back. There is trepidation that the Russians may try to come back and also concern about unexploded ordnance, mines, lack of power and water, and diseases.

Russian corpses are still being found in fields and abandoned houses, some which have been put in shallow graves by local people, after authorities failed to take them away, have been dug up by packs of dogs. The warm spring weather, with temperature in the early 20 degrees celsius has led to worries about spreading contagions.

The Russian occupation and Ukrainian counter-attacks took a lethal toll on the village. Many residents who died were buried in the gardens of their homes, with the cemetery too dangerous to attempt to reach due to the fighting.

We saw dead bodies of Russian soldiers strewn in the alleyways of the village and the fields beyond on our last visit and they are still being found. One, an officer judging from the chevrons on his combat jacket, lay in the basement of one house with a wound to his head, and a Grach pistol in his hand.

“He was surrounded, he may have taken his own life, that could have been it,” said a Ukrainian soldier. He did not want to search the body wary that the dead man’s comrades may have booby-trapped it.

A Russian corpse had lain outside the home of 87-year-old Vasilyi Gregorovich for days. “The first live Russian I saw was when I was looking out of the window, he tried to shoot me, luckily he missed”, he recalled. “As they were withdrawing from here at the end three more came and hid in my house. I went out and told the [Ukrainian] soldiers and they were arrested. They didn’t fight, they were taken away. I don’t know if they were responsible for any crimes like what happened to that young woman.”

A little distance away Yuri Sorokotigyan was planting his kitchen garden with garlic, onions and potatoes. One patch, a mound, was marked by four metal rods. “Russian dead, maybe about half-dozen, they are all in there”, he explained. “I saw hands, faces, badly burned. They were lying around in the field, dogs started eating them. They still come sniffing around, look! The officials say these bodies would be exhumed, but they don’t say when.”

There were plenty of signs of Russian material losses. Within a 500 metre radius lay a BTR-80 armoured personnel carrier sheared in half, a T-72 tank which had taken a direct hit from a drone and a Mi-17 helicopter which, according to locals, was downed by Russian “friendly fire”.

In the cockpit of what had been the helicopter lay a “12 Bar Value Pack” of KIND Nuts & Sea Salt chocolates, with a message on the packet from its American manufacturers: “Our goal is to make KIND not just a brand but also a state of mind and community to make the world a little kinder.”

“The chocolate was probably stolen from a Ukrainian home,” said Mr Sorokotigyan. “There hasn’t been much kindness in this war. So many deaths, homes destroyed, for what? We have friends, families, in Russia. People used to cross the border to meet each all the time. and now they are killing each other.”

Mr Sorotigyan had served in Afghanistan and Germany as a soldier in the Soviet army. “There were Ukrainian, Russians, Uzbeks, Georgians all part of the same military. We knew who was in which side. Now we are invaded and we have people from all these countries fighting in Ukraine. There will be a lot of anger even when this war is over,” he predicted.

Not all the anger is solely directed at the Russians. Standing in front of his house shattered by a missile strike, 46-year-old Pavlo Chiuko complained: “I am not bringing my family back. There are mines and bombs which have not been cleared. We are also worried about illness affecting our children, how can one leave dead bodies around without diseases breaking out?

“I’ll have to rebuild my house by myself. There is no help from officials. We blame the local government for this; all of them disappeared when the Russians came we were left to look after ourselves.”

Not all officials had, however, gone. Valeryi, a judge sent his family out of Ukraine to Germany but stayed on in the village of Vilhivka.

“We didn’t know what to expect at first. The tanks came up to the road in front and some soldiers came to talk to us. They seemed quite civil at first. A lot of them were from the DNR [the separatist Donetsk Peoples Republic] and looked very young.

“Then there was a lot of fighting up the road and the Russians took heavy losses. They showed another side to them when they retreated, they just opened fire as they came past these houses, it was just revenge,” he said, pointing to the walls of his own home pockmarked with holes.

A family seeking to escape in a car were attacked, killing three women and two children. The bodies were left for days before being removed, with a pet dog which would not let emergency service workers near the remains having to be shot.

The main school at Vilhivka has been left a charred shell by the fighting. Olena Mikholaiva’s home across the road was destroyed; she now stays in an abandoned house nearby.

“I am lucky, I was in a shelter when the house got hit,” she said. “I don’t know where I’ll end up staying, we are getting food from the aid people so I am not going hungry.”

Ms Mikholaiva’s two children live away from the village, her daughter abroad. “I hope they come back here one day. Our family have been living in this area for over three hundred years, it’s important for people to keep their roots even in times of trouble,” she wanted to stress.