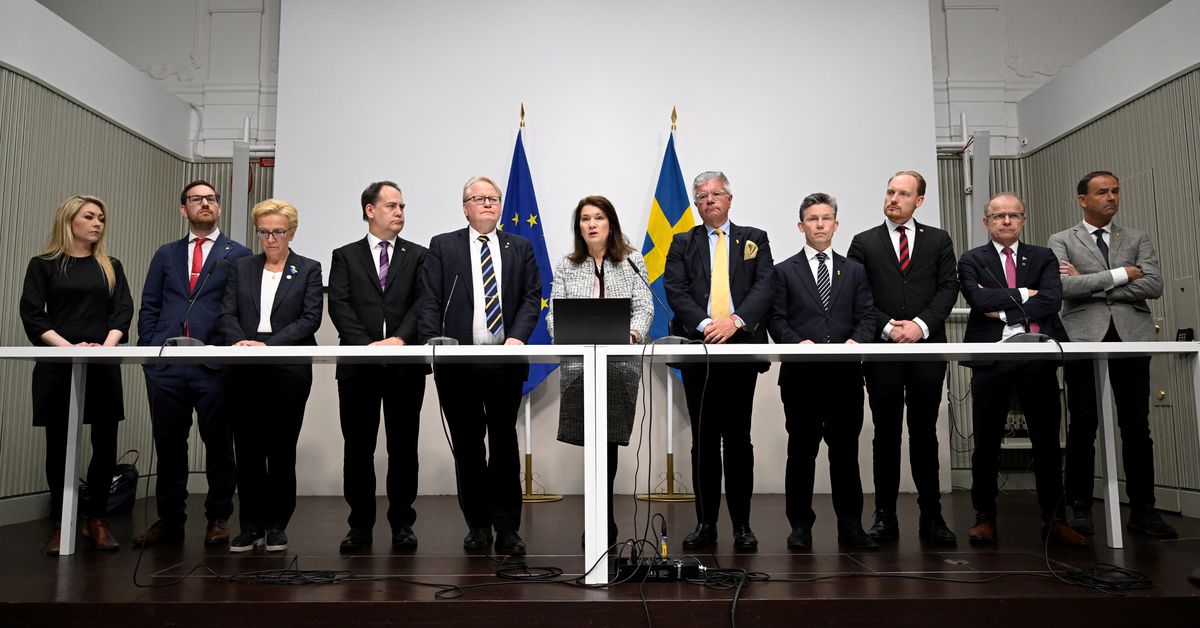 STOCKHOLM, May 13 (Reuters) – Swedish membership of NATO would boost national security and help stabilise the Nordic and Baltic regions, Foreign Minister Ann Linde said on Friday, a day after neighbour Finland said it would seek to join the U.S.-led alliance without delay.

Russia’s invasion of Ukraine has forced Sweden – and its closest military partner Finland – to publicly pick sides after remaining outside the military alliance since it was founded in 1949 to counter the Soviet Union in the Cold War.

Stockholm is widely expected to follow Helsinki’s lead and could apply for entry to the 30-nation North Atlantic Treaty Organization as early as Monday. read more

“Swedish NATO membership would raise the threshold for military conflicts and thus have a conflict-preventing effect in northern Europe,” Linde told reporters as she presented the conclusions of an all-party security review that examined the pros and cons of NATO membership for Sweden.

“The most important consequence of Swedish membership of NATO would be that Sweden would be a part of NATO’s collective security and included in security guarantees according to…Article 5.”

While Sweden and Finland have long had close relations with NATO and regularly take part in exercises and its high-level meetings, they are not covered by its security guarantee.

The government said the report did not constitute a recommendation to join NATO.

The Left and Greens were the only parties that did not support the report’s conclusions.

An application would have to be approved by all NATO countries and, later, by Sweden’s parliament.

Turkish President Tayyip Erdogan said on Friday it was not possible for NATO-member Turkey to support Swedish and Finnish membership because, he said, the two countries were “home to many terrorist organisations”. L5N2X53HU

Turkey has in the past criticised Sweden and other Western European countries for their handling of organisations deemed terrorist by Ankara, including Kurdish militant groups PKK and YPG and followers of U.S.-based Islamic cleric Fethullah Gulen.

Linde said Sweden nevertheless hoped to get unanimous support in NATO if it applied and that the two Nordic countries had “very, very strong support” from important member states with whom Turkey had an interest in maintaining good relations.

She added that she would discuss the situation at an informal meeting of NATO foreign ministers in Berlin over the weekend to which both Sweden and Finland were invited.

Finnish Foreign Minister Pekka Haavisto counselled patience. “It’s not happening in one day,” he told reporters, adding that he was due to meet his Turkish counterpart in Berlin on Saturday. read more

The United States’ top diplomat for Europe at the State Department said on Friday the U.S. was planning to raise the issue with Turkey in Berlin. read more

“In terms of the comments President Erdogan has made, we’re working to clarify Turkey’s position,” Karen Donfried, Assistant Secretary for Europe and Eurasian Affairs at the State Department told reporters in a call.

“Turkey and Sweden have worked very effectively in the NATO context,” she added.

FROM ARCTIC TO BLACK SEA

Finnish and Swedish membership of NATO would redraw the geopolitical map of northern Europe and create a largely unbroken ribbon of member states facing Russia from the Arctic to the Black Sea.

On Thursday, Finland’s president and prime minister said the country – which shares a 1,300-km (810-mile) border and a difficult past with Russia – must apply to join the NATO military alliance “without delay”.

Russia said Finland’s bid was a hostile move that posed a threat to its security. read more

Moscow in April said it could station nuclear-armed missiles in the Russian territory of Kaliningrad, sandwiched between NATO members Poland and Lithuania on the Baltic Sea, if Finland or Sweden joined the defence alliance. read more

“If Sweden chooses to seek NATO membership, there is a risk of a reaction from Russia,” Defence Minister Peter Hultqvist said. “Let me state that, in such a case, we are prepared to deal with any counter-response.”

Finnish President Sauli Niinisto said threats from Russia had been expected. “We can’t go back to the way we were used to it being,” Swedish news agency TT quoted him saying on Friday. “But Russia should also have an interest in seeing that we don’t have high tensions at the border all the time.”

He said he planned to ring Russian President Vladimir Putin and “tell him that the situation has changed, as we both know”.

Reporting by Johan Ahlander and Simon Johnson in Stockholm, additional reporting by Anna Ringstrom in Stockholm, Ece Toksabay in Ankara, Humeyra Pamuk and Simon Lewis in Washington and Essi Lehto in Helsinki; editing by Niklas Pollard and Mark Heinrich