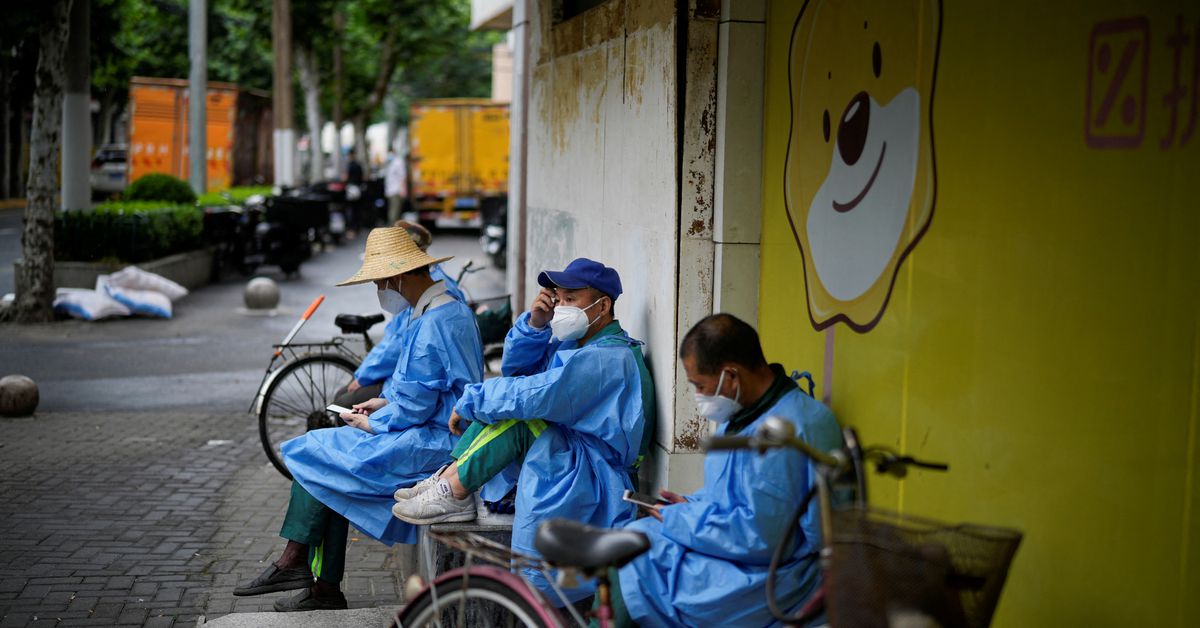 Workers in protective suits rest on a street during lockdown, amid the coronavirus disease (COVID-19) outbreak, in Shanghai, China, May 28, 2022. REUTERS/Aly Song

SHANGHAI/BEIJING, May 29 (Reuters) – Shanghai announced on Sunday further steps towards returning to more normal life and lifting a two-month COVID-19 lockdown this week, while Beijing reopened parts of its public transport, some malls, gyms and other venues as infections stabilised.

The Chinese commercial hub of 25 million aims to essentially end from Wednesday a lockdown that has severely damaged the economy and seen many Shanghai residents lose income, struggle to source food and to cope mentally with prolonged isolation.

The painful coronavirus curbs in major Chinese cities run counter to trends seen in the rest of the world, which has largely moved towards co-existing with the virus even as infections spread.

“The current epidemic situation in the city continues to stabilise and improve,” Yin said, adding Shanghai’s strategy was now “pivoting towards normalised prevention and control.”

Plaza 66, an upscale mall in central Shanghai that hosts Louis Vuitton and other luxury brands, reopened on Sunday.

Authorities have been slowly relaxing curbs, with a focus on resuming manufacturing.

More people have been allowed to leave their flats, and more businesses permitted to reopen, though many residents remain largely confined to their housing compounds, and most shops limited to deliveries.

The authorities approved 240 financial institutions in the city for reopening from Wednesday, state-run Shanghai Securities News reported on Sunday, adding to a list of 864 firms released earlier this month. That is out of Shanghai’s roughly 1,700 financial firms. read more

The newspaper said on Saturday that the more than 10,000 bankers and traders who have been living and working in their offices since the start of lockdown were gradually returning home.

In the capital Beijing, libraries, museums, theatres and gyms were allowed to reopen on Sunday, with limits on numbers of people, in districts that have seen no community COVID cases for seven consecutive days.

The districts of Fangshan and Shunyi will end work-from-home rules, while public transport will largely resume in the two districts as well as in Chaoyang, the city’s largest. Still, restaurant dining remains banned city-wide.

China’s economy has shown signs of recovering its heartbeat this month following April’s slump, but activity levels are weaker than last year and many analysts expect a second-quarter contraction.

The strength and sustainability of any recovery will depend largely on COVID, with the highly transmissible Omicron variant proving hard to exterminate and prone to comebacks.

Investors have worried about the lack of a roadmap for exiting the zero-COVID strategy of ending all outbreaks at just about any cost, a signature policy of President Xi Jinping. He is expected to secure an unprecedented third leadership term at a congress of the ruling Communist Party in the autumn.

“We expect policies to ease further on the fiscal front to boost demand, given downward pressures on growth and the uncertainty of the recovery pace,” Goldman Sachs analysts wrote in a Friday note.

Reporting by the Beijing and Shanghai bureaus; Writing by Marius Zaharia; Editing by William Mallard