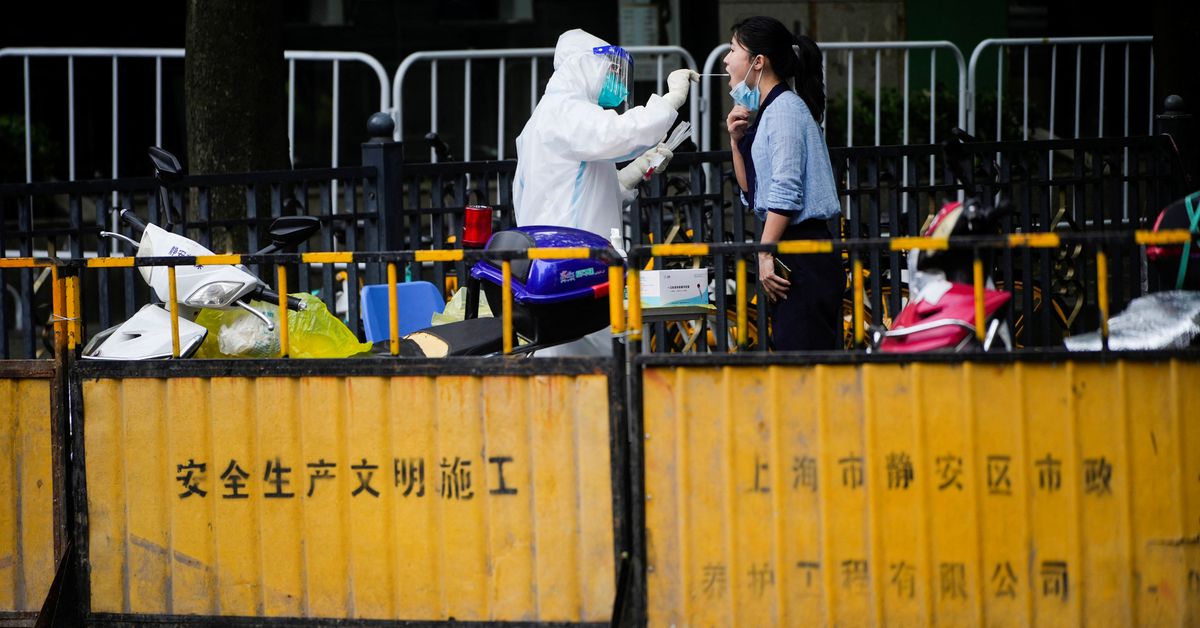 SHANGHAI/BEIJING, May 20 (Reuters) – Shanghai announced its first new COVID-19 cases outside quarantined areas in five days on Friday, triggering stricter curbs and mass testing in one district but plans to end a prolonged city-wide lockdown on June 1 appeared on track.

The commercial hub of 25 million found three new cases in the same family in Qingpu district. All had taken three doses of vaccine and their infections were discovered during regular testing, authorities said.

The three had not left their district town over the past 14 days but had visited at least four places, including a supermarket, all of which were sealed off and were being disinfected, authorities said.

The area’s more than 200,000 people had been re-tested and all results were negative.

Other officials said steps in the gradual re-opening of Shanghai were going ahead, with suburban parks due to open from Sunday. Other parks could open from June if they met certain conditions but leisure facilities in parks would remain closed.

Shanghai has been allowing more people to leave their homes in recent days, with many residential compounds issuing a limited number of passes for brief walks or trips to the supermarket. Still, most people remained stuck indoors, relying on delivery apps for their shopping and government rations.

The almost complete shutdown of Shanghai and strict measures in other cities are the result of a national “zero-COVID” policy to end all outbreaks as soon as they occur, in contrast with the resumption of normal life in the rest of the world.

Beijing, home to 22 million people, reported 62 new COVID infections for May 19, up from 55 a day earlier.

China’s capital has struggled to end an outbreak since late April despite significant curbs on movement, with many residents working from home and a range of shops and venues closed.

But Beijing’s daily caseload has remained in the dozens rather than exploding like Shanghai’s outbreak did.

On Friday, Shanghai reported a broad economic decline in April, with many factories shut and workers and consumers stuck at home. The city’s industrial output shrank 61.5% from last year, the biggest monthly decline since 2011.

Retail sales dived 48.3%, significantly steeper than the 11.1% drop nationally, and property sales by floor area sank 88%, according to a Reuters calculation. read more

The European Chamber of Commerce in China warned this week that many companies and individuals were “seriously considering their China presence”, even though this month, the COVID situation in Shanghai and more broadly in China has been improving.

Analysts at Gravekal Dragonomics estimate fewer than 5% of Chinese cities are now reporting infections, down from a quarter in late March.

To keep the virus at bay, many cities have set up municipal border controls, conduct frequent mass testing and monitor and isolate new infections, including through building lockdowns.

“This new normal should allow manufacturing supply chains to gradually resume normal operation, but will continue to weigh on consumption, the services sector and small business,” Gavekal analysts wrote in a note.

There have been signs of the economy responding positively to the looser controls in May after the April contraction.

While still down 21% from last year, retail car sales jumped 27% in the first half of May from the same period in April, data showed this week.

Policymakers have promised more fiscal and monetary stimulus to help the economy.

China cut its benchmark reference rate for mortgages by a bigger-than-expected margin at its May fixing on Friday, a second reduction this year, as the government is keen to revive credit demand. read more

Property and related industries such as construction account for more than a quarter of the economy and were in a downturn even before the lockdowns. A campaign by the authorities to reduce high debt became a liquidity crisis last year for some major developers, resulting in bond defaults and projects being put on hold, unsettling global financial markets.

Xing Zhaopeng, senior China strategist at ANZ, predicted further easing, saying: “Policymakers might have reached a consensus on whether to revive the property sector.”