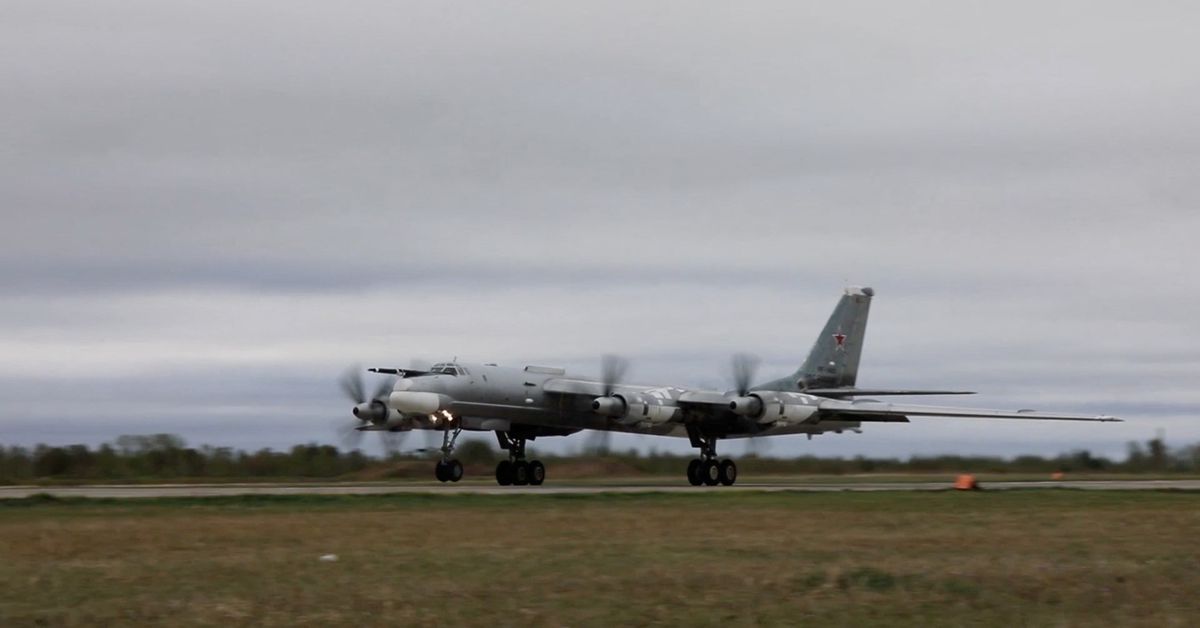 TOKYO/SEOUL/WASHINGTON, May 24 (Reuters) – Russian and Chinese bombers flew joint patrols near Japanese and South Korea air defense zones on Tuesday in a pointed farewell to U.S. President Joe Biden as he concluded a trip to Asia that rankled Beijing.

The patrols came hours after Biden angered China by saying he would be willing to respond militarily to defend Taiwan if it came under Chinese attack, and as he discussed responses to Russia’s invasion of Ukraine with leaders of the Quad, which groups the United States with Australia, India and Japan.

Japan said it scrambled jets after Russian and Chinese warplanes neared its airspace while Tokyo was hosting the Quad leaders. Tokyo called the drills a provocation. read more

It was the first joint military exercise by China and Russia since Moscow invaded Ukraine on Feb. 24, according to a senior U.S. official, and it came at the end of Biden’s four-day trip to South Korea and Japan.

“China is not walking away from Russia. Instead, the exercise shows that China is ready to help Russia defend its east while Russia fights in its west,” the official said. read more

State Department spokesman Ned Price told a regular briefing the joint patrol traversed the Sea of Japan and continued through the East China Sea and the Philippine Sea. He said the exercise was likely planned well in advance and showed that the “no-limits” strategic partnership Beijing and Moscow declared weeks before the Ukraine invasion was “quite alive and well.”

“On the other hand the president’s successful visit … demonstrates a stark contrast to what we’ve seen from Russia and China; it demonstrates our commitment to a free and open Indo-Pacific region,” he said.

Biden’s trip was part of U.S. efforts to push back against what Washington calls Beijing’s “coercive” behavior, including against Taiwan, a self-ruled island Beijing claims as it own.

In Asia, Biden vowed that Washington would stand with allies and partners to push for a free and open Indo-Pacific region.

At a news conference on Monday, Biden said “yes” when asked if he would be willing to respond militarily to a Chinese attack on Taiwan, seeming to break with a long-held policy of not making clear how the United States might react.

It was the latest in a series of apparently off-the-cuff assertions that suggest his personal inclination is to defend the island, although Biden said U.S. policy had not changed.

Some critics have said he has misspoken or made a gaffe. But other analysts have suggested that, given Biden’s extensive foreign policy experience and the context – he was speaking next to the Japanese prime minister and while the war in Ukraine raged on – he had not spoken in error. read more

Analysts and advisers said Biden went to Asia with a clear message for China not to try what Russia did in Ukraine anywhere in the region, especially not Taiwan. read more

Japanese and South Korean air force planes shadowed the Russian and Chinese aircraft for part of the exercise, it said.

“We believe the fact that this action was taken during the Quad summit makes it more provocative than in the past,” he said.

In a joint statement, the leaders said they “discussed their respective responses to the conflict in Ukraine and the ongoing tragic humanitarian crisis.” But in an apparent concession to India, which maintains close ties with Moscow, the words “Russia” or “Russian” did not appear.

Daniel Russel, the top U.S. diplomat for East Asia during the Obama administration, said sending military jets near Japan’s airspace while Biden and other leaders were there was “a petulant act of defiance by Beijing and Moscow against the growing solidarity among the major democratic powers.”

Rand Corporation analyst Derek Grossman said the drills were “clearly designed to signal Beijing’s frustration with the Quad summit and all of President Biden’s proceedings over the last few days.”

He said Moscow could also be returning the favor after Beijing supported the Russian narrative that the United States and NATO are to blame for the Ukraine war.

In a meeting on Sunday, its new president, Yoon Suk-yeol, and Biden pledged support for measures seen as countering China’s regional influence and criticized Russia’s war in Ukraine.

South Korea had no warning of the drills and when it saw the aircraft appeared to be headed toward its defense zone, used hotlines to warn Chinese and Russian counterparts, a military source in Seoul said.

China responded by saying it was a regular exercise, but there was no response from Russia, the source said.