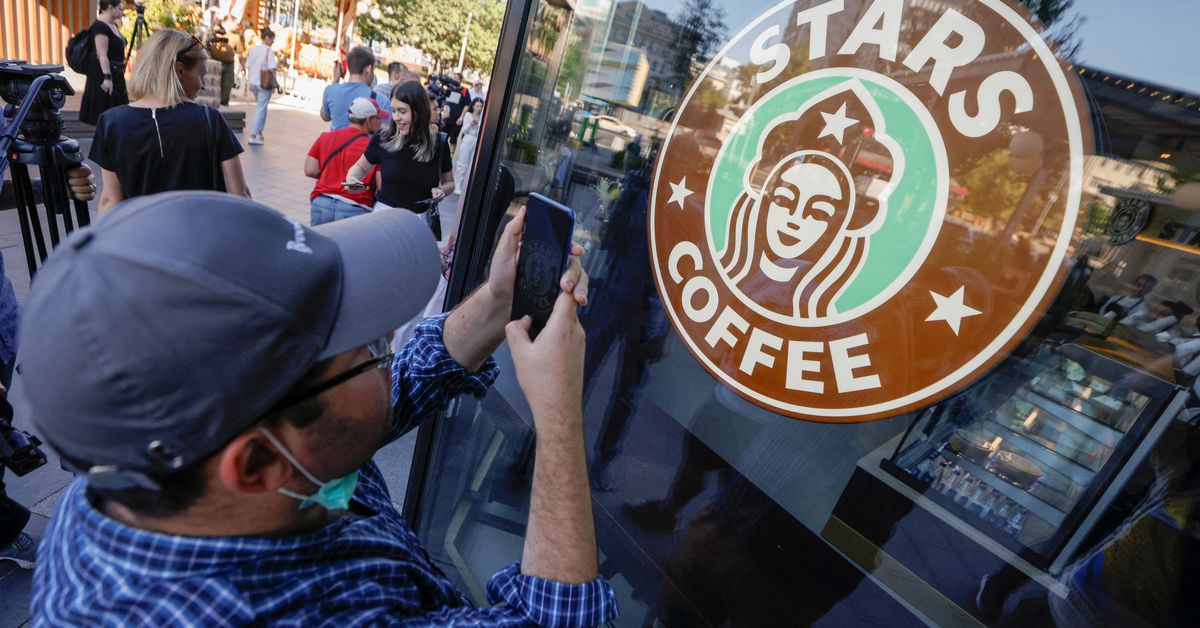 MOSCOW, Aug 18 (Reuters) – A restaurateur and rapper duo are set to reopen the chain of coffee shops in Russia formerly owned by Starbucks Corp (SBUX.O) on Thursday, the latest rebranding of a major Western company following a months-long corporate exodus from the country.

According to a shop front in central Moscow seen by Reuters, and the Instagram feed of rapper and co-owner Timati, the chain will be renamed Stars Coffee, with a new logo still featuring an image of a woman with a star above her head.

The new name on the Moscow shop was still under cover of plastic on Wednesday evening as Timati and co-owner, restaurateur Anton Pinskiy, prepared to unveil the first new store later on Thursday.

Starbucks declined to comment on the similarity of the logo and name, but referred to an earlier statement in which it said the company had made the decision to exit and no longer had a brand presence in the Russian market.

In late May, Seattle-based Starbucks, which helped popularise takeaway coffee in a traditionally tea-loving society, said it would exit Russia after nearly 15 years.

Starbucks had 130 stores in Russia, operated by its licensee Alshaya Group, with nearly 2,000 employees in the country.

The relaunch follows a similar move by Vkusno & tochka, which took over former McDonald’s Corp (MCD.N) restaurants in Russia, moves that are changing the country’s retail and corporate landscapes as the conflict in Ukraine enters its sixth month.

It is also the latest example of prized assets from car factories and tyre makers to food retailers being handed over to local business people in an unexpected windfall.

Pinskiy in July told Forbes Russia he would become a co-owner of Starbucks’ coffee shops in Russia, also partnering with the Sindika holding company. read more

While the partnership may appear unlikely, Timati, one of Russia’s most famous rappers, co-founded the Black Star Burger chain in Russia, which sells a “Timati Burger”.

He is also known for his support of the Kremlin and in 2015 released a track containing the lyrics “President Putin is my best friend”.

Pinskiy, who earlier this month told Russian reporter and political activist Ksenia Sobchak that he had never tried coffee in his life, has a string of restaurants in his portfolio, including a joint project with Timati, REDBOX, which serves Pan-Asian cuisine.