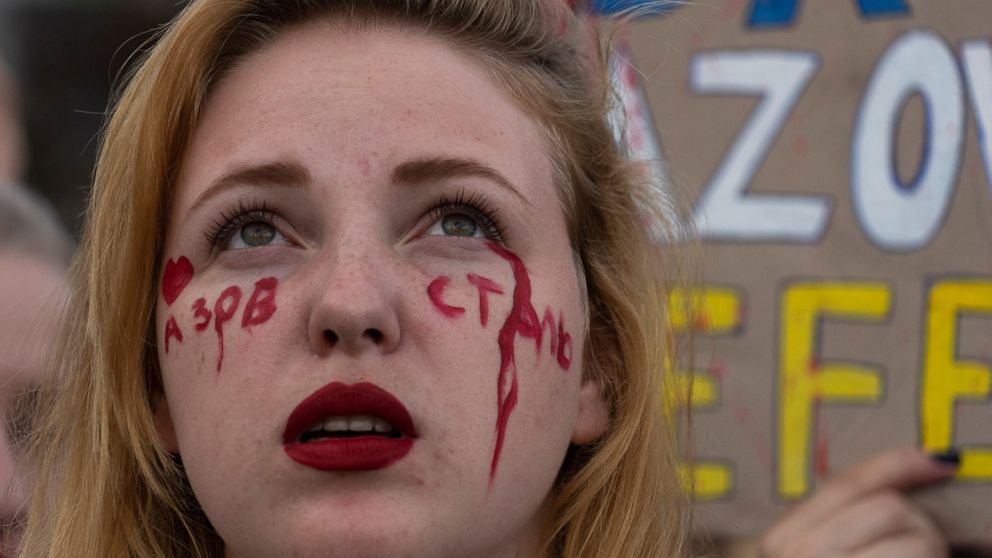 KYIV, Ukraine — Relatives of prisoners of war captured by the Russians following the fall of Mariupol gathered in central Kyiv Thursday demanding information about their husbands, fathers and sons following a strike on a prison housing POWs in a separatist region of eastern Ukraine last week that reportedly killed and wounded dozens.

One of those gathered was Eugenia Vasylieva who last saw her husband Valeriy Vasyliev in Mariupol on the night of Feb. 24, the day of Russia’s invasion of Ukraine. That night he went to defend his city. Her 7-year-old daughter Zlata Vasylieva, holding a placard calling for her father’s return, said: “I want my dad to be alive and that he never die.”

Russia has claimed that Ukraine’s military used U.S.-supplied rocket launchers to strike the prison in Olenivka, a settlement controlled by the Moscow-backed Donetsk People’s Republic.

The Ukrainian military denied making any rocket or artillery strikes in Olenivka. The intelligence arm of the Ukrainian defense ministry claimed in a statement Wednesday to have evidence that local Kremlin-backed separatists colluded with the Russian FSB, the KGB’s main successor agency, and mercenary group Wagner to mine the barrack before “using a flammable substance, which led to the rapid spread of fire in the room.”

Ex-commander of the Azov Regiment Макsym Zhorin told the AP there were around 1,500 defenders of Mariupol in Olenivka before the explosion. They were part of 2,400 soldiers from the Azov Regiment of the Ukrainian national guard and other military units defending Mariupol who surrendered under orders from Ukraine’s military in May.

“But there were 100-150 people in the facility that was blown up,” said Zhorin. He said the conditions in the block where the prisoners of war were being held were not suitable for living. The facility was not located next to the other barracks but on the outskirts of the prison near the warehouses.

U.S. officials believe Russia is working to fabricate evidence concerning the strike. U.S. intelligence officials have determined that Russia is looking to plant false evidence to make it appear that Ukrainian forces were responsible for the July 29 attack on the prison, which left 53 dead and wounded dozens more, a U.S. official familiar with the intelligence finding told The Associated Press on Wednesday.

Zhorin says Ukraine has extremely little time to get to the crime site and to the witnesses who can give accounts of what really happened.

“We cannot be sure they will be alive tomorrow, that the Russians will not kill them. So far, nothing prevents them from doing it,” Zhorin said.

Relatives of prisoners of war are increasingly frustrated at the lack of information they are getting about the fate of their loved ones. Because the International Committee of the Red Cross (ICRC) acted as a guarantor of the security of the military members who left Azovstal in May, they are looking to the committee to give them answers.

“Our goal is to reach the Red Cross, to say that they are not fulfilling their duties. We entrusted them with the lives of our boys. And it shouldn’t be like this that the Red Cross is now saying they are not responsible for anything,” says Iryna Yermoshyna, the wife of a POW. She says the Red Cross has only contacted her once since her husband was captured.

Kateryna Chyzykova saw the name of her husband in the list of wounded soldiers, which Russia’s ministry of defense published after the explosion. She says she’s tried to contact the ICRC to try and find out about her husband’s condition but has so far been unsuccessful.

Zhorin says the list of casualties published by the Russian side is incorrect. He said among those listed as dead were names of people who died even before the explosion in Olenivka.

“Unfortunately, we already know that there are more dead POWs. There are victims who died in the hospital or on the way to the hospital,” Zhorin said.

So far the ICRC has not been able to access Olenivka and the wounded, so they have been unable to verify the list of names.

Earlier this week, Russia’s Supreme Court declared Ukraine’s Azov Regiment a terrorist organization, a move that some fear could lead to terror charges against some of the captured fighters who made their last stand inside Mariupol’s shattered steel plant and make it more difficult to verify who was at the blast site.

“All of these are official units that certainly cannot be separately recognized as terrorist organizations. This is part of the entire defense of Ukraine,″ Zhorin said.

Zhorin believes that Russia made the ruling so they could put members of the Azov regiment on trial. Before the ruling, they could not hold a trial against fighters as their status as prisoners of war gave them protection under the Geneva Conventions.

Moscow has repeatedly portrayed the Azov Regiment as a Nazi group and accused it of atrocities but has publicly produced little evidence.

The regiment, a unit within Ukraine’s National Guard, has a checkered past. It grew out of a group called the Azov Battalion, formed in 2014 as one of many volunteer brigades created to fight Russia-backed separatists in eastern Ukraine. The battalion drew its initial fighters from far-right circles.

While its current members reject accusations of extremism, the Kremlin has seized on the regiment’s right-wing origins to cast Russia’s invasion as a battle against Nazi influence in Ukraine.

Meanwhile, covered in artificial blood, Olha stood in the Kyiv square with a message for her boyfriend who is in captivity. “I want to give him all my love, to tell him that everything will be fine, that I will fight for him until the end.”