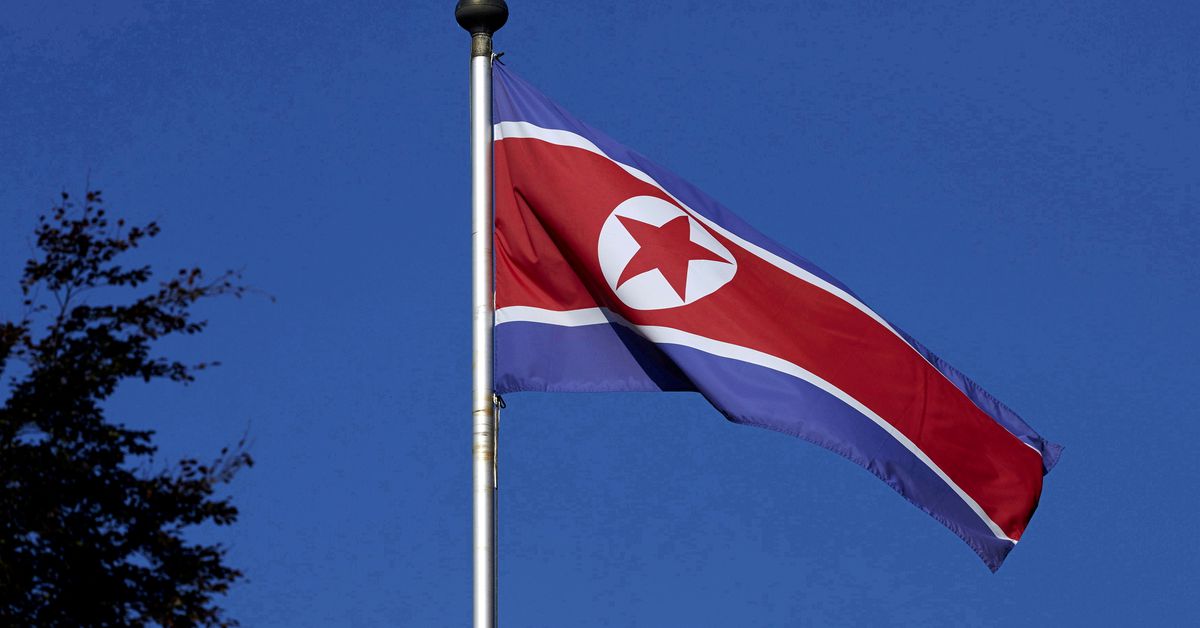 A North Korean flag flies on a mast at the Permanent Mission of North Korea in Geneva October 2, 2014. REUTERS/Denis Balibouse/File Photo

SEOUL, Nov 4 (Reuters) – North Korea can get all the uranium it needs for nuclear weapons through its existing Pyongsan mill, and satellite imagery of tailings piles suggests the country can produce far more nuclear fuel than it is, a new academic study concludes.

Despite a self-imposed moratorium on nuclear weapons tests since 2017, North Korea has said it is continuing to build its arsenal, and this year it appeared to have restarted a reactor that is widely believed to have produced weapons-grade plutonium.

According to research published last month in the journal Science & Global Security by researchers at Stanford University and an Arizona-based mining consulting company, North Korea may be able to increase production, and has no need for other uranium mills.

“It is clear that the DPRK appears to have substantially more milling capacity than it has been using to date,” said the report, using the initials of North Korea’s official name, the Democratic People’s Republic of Korea. “This means that the DPRK could produce much greater quantities of milled natural uranium if desired.”

The Pyongsan Uranium Concentration Plant and its associated mine are North Korea’s only publicly acknowledged source of yellowcake, or uranium ore, according to analysts.

The report comes as other satellite imagery shows North Korea is building a large expansion at its Yongbyon nuclear reactor, which analysts say may be used to produce weapons-grade uranium.

“Given the DPRK’s active nuclear program, it is of utmost importance to assess and understand its nuclear materials production capabilities,” wrote the report’s authors, who submitted their findings in April.

These capabilities govern the rate at which North Korea might expand its nuclear arsenal, determine the magnitude of the threat to international security and the challenge of potential nuclear disarmament, and measure North Korea’s ability to fuel its future nuclear energy program, the report said.

The question over how many nuclear weapons North Korea possesses is a key issue for intelligence agencies in South Korea and the United States, as well as for any talks aimed at limiting or reducing North Korea’s arsenal.

The United States, which wants Pyongyang to surrender its nuclear arsenal, has said it is open to meeting with North Korea without preconditions. North Korea says talks are only possible after the United States and its allies drop hostile policies.

Intelligence on North Korean nuclear weapons is limited, but David Albright, president of the Institute for Science and International Security, has told Reuters he estimates the country has the capacity to produce material for four to six warheads a year.

The head of the International Atomic Energy Agency (IAEA) said in September that North Korea’s “nuclear programme goes full steam ahead with work on plutonium separation, uranium enrichment and other activities.”

There have been no reported accounts of outside inspector access to the Pyongsan uranium mine after the IAEA visited in 1992, leaving details of the mill uncertain, the academic report said.

Yellowcake from the mine and mill is a key component of North Korea’s nuclear fuel production, including its 5-megawatt (MW) reactor, which is seen as capable of producing weapons-grade plutonium.

The IAEA and other analysts reported over the summer that the reactor appeared to be operating for the first time since 2018.