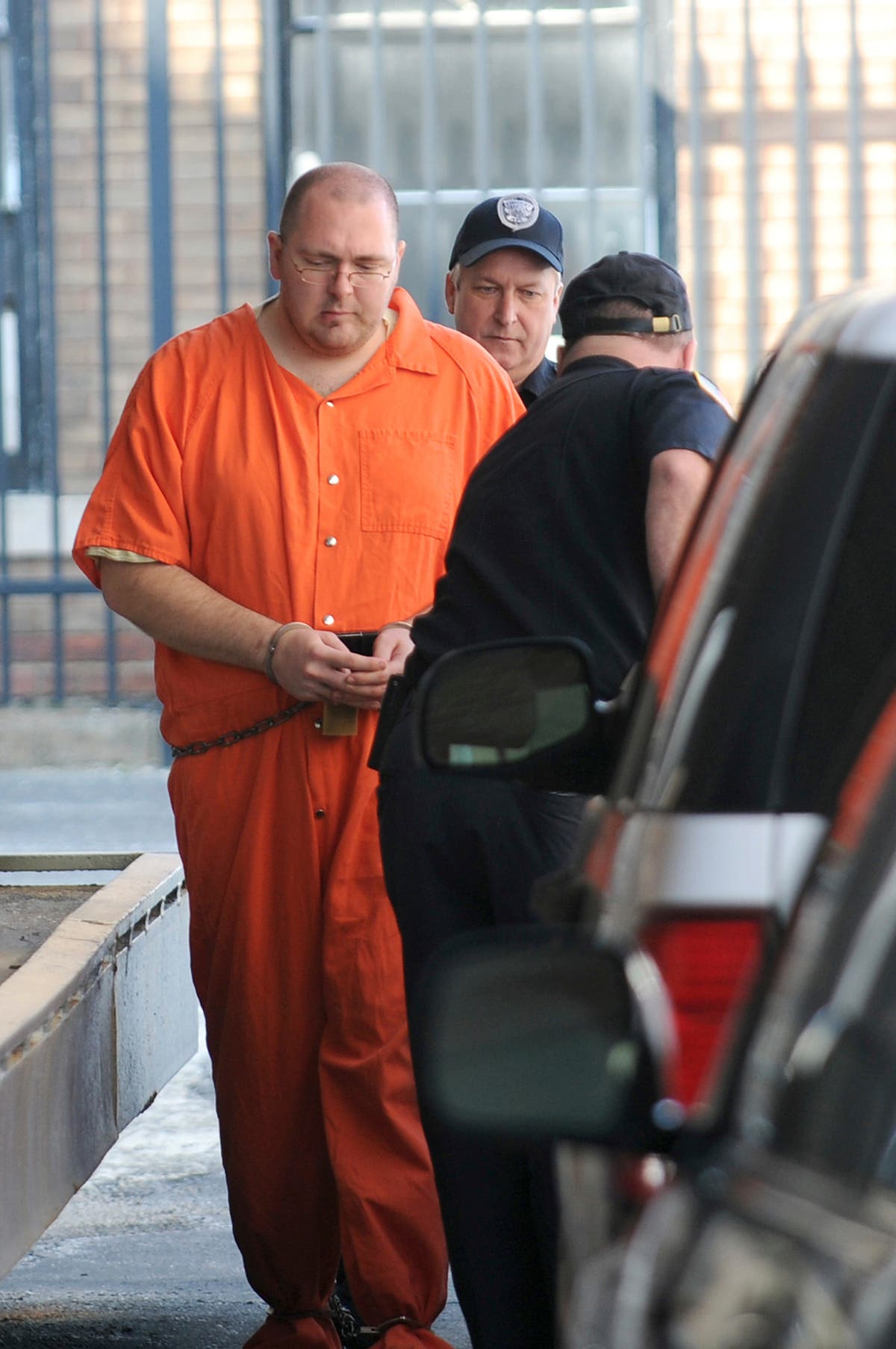 Michael Carneal was just 14 when he walked into the lobby of his Kentucky high school on the Monday after Thanksgiving 1997 with a large bag full of weapons.

A member of the school band and a victim of bullying, Carneal loitered in the lobby that morning, then put in earplugs, picked up a handgun he’d smuggled in and opened fire on a prayer group meeting before class.

He killed three students and injured five others, including some who’d considered him a friend. The teen was sentenced to life in prison with the possibility of parole.

A quarter-century later, that day has come and it’s a rare circumstance.

Few fatal school shooters have reached this point. They often take their own lives, are killed by law enforcement during the incident or sentenced to life without parole. Notably, Carneal’s massacre took place in 1997, even before Columbine footage shocked the world less than two years later, cementing school shootings as a dreaded but oft-spoken part of the US vernacular.

A female school shooter who killed two and injured nine in 1979 received the same life sentence as Carneal with eligibility for parole in 25 years. She’s been denied it six times.

Earlier this week, Carneal’s victims and their relatives spoke before two members of Kentucky’s State Parole Board; all but one argued for his continued imprisonment. The shooter gave his own testimony the next day, but the members were unable to reach a unanimous decision.

Next week, the full state parole board will consider Carneal’s case. They have only three options: Let him out, keep him in prison or defer the parole decision for years. There is no option to transfer Carneal to a psychiatric facility instead of prison.

But Carneal himself on Tuesday told the two board members that, despite 25 years of treatment and a course of three psych meds, he still hears voices. He appeared fidgety and nervous during his testimony before chairperson Ladeidra N. Jones and board member Larry Brock.

Even at 14, Carneal said he knew right from wrong but blamed the massacre on a “combination of factors.”

“I was hearing things, and I was extremely hyper suspicious,” he told the board. “And I had felt for years, feeling alienated and different, and I think that when I startd to develop mental health problems, that it fed into that – and it kind of … it made my mental health problems worse, that I spent those years feeling like that.

“And it got to the point where I was hearing things in my mind, to do certain things, and I was doing them. I wasn’t strong enough or I wasn’t thinking properly enough to evaluate what i was being told to do, and I just found myself doing them.”

Here’s what Carneal did: He stole guns and ammunition from his father and a neighbour and disguised them as a class project when his sister drove him to school on 1 December 1997. He walked into the lobby of Heath High School, where students were chatting animatedly after Thanksgiving and some were gathering for a prayer group that happened voluntarily before classes.

Carneal had rifles with him, but he didn’t use them. Instead, he fired a 22-caliber semiautomatic pistol around 7.45 am. He shot Nicole Hadley, 14, in the forehhead, then fatally shot Jessica James, 17; and Kayce Steger, 15, as well. Carneal injured five more people, including Missy Jenkins Smith, who has been paralyzed from the chest down ever since.

Before that day, several of his victims had considered him their friend. Carneal admitted that he’d liked some of his victims while testifying on Tuesday before the two board members.

Jessica James was “always a leader, a positive leader, in the band,” he said, known for “helping the younger people out.” He killed her.

Carneal killed and injured eight people before he was approached by the principal, Bill Bond, who took him back into the school offices to wait for police. He faced murder, attempted murder and burglary charges and pled guilty, focusing his defence on mental illness and bullying.

Missy Jenkins Smith, his bandmate who’s been wheelchair-bound since that day, was friendly enough with Carneal and admits that Heath High School “had a severe problem with bullying.”

Before the shooting, she said, “there were times where [Carneal] might do something – and I always thought he was funny – but there were some people that, you know, would treat him like he was, you know, annoying or whatever it may be … so he dealt with that, but that doesn’t mean I give him an excuse whatsoever.”

She says she remembers being slightly jealous, in fact, at how Carneal seemed able to brush off the bullying – until the day he unleashed a bloodbath in the high school hallway before he stopped shooting.

He was the last person she thought would be responsible for such horror on a day that started so normally. Missy was rushing to leave the house that morning so her older sister wouldn’t leave for school without her; to this day, she regrets not telling her parents she loved them as she said goodbye. She’d face her own mortality minutes later.

After getting to school, she and Mandy were in the hallway when the announcement was made for the daily prayer circle, as students gathered before class to reflect and pray about anything that might be on their minds.

That’s when she heard what sounded like firecrackers. She saw Nicole get shot and, she thinks, went into shock – right around the time a bullet hit her, too.

Ms Jenkins Smith visited Carneal in prison with her twin, Mandy – who was present for the shooting and tried to shield her sister – ten years after the incident. She then wrote books and became an advocate, and her testimony to the Kentucky parole board on Monday was jarring.

“I want you to consider how long it’s been that he’s been taken care of by others,” Missy, now a married mother of two, told the board. “From the age of 14 years old to his present age of 39, he hasn’t had the responsibility to take care of himself and has been cared for for the past 25 years.

“How could anyone say with confidence he could to that for the rest of his life?” she asked, adding: “What if stressors in this new world begin to weigh on him – having trouble finding a job after jail time for murder or attempted murder, running into people who know who he is and what he did? How sure are we that he’d be able to handle this new world that’s changed around him? What if these problems affect him so much emotionally that he chooses not to take his medication? What if it affects him emotionally enough that his medications aren’t helping anymore?

“There are too many ‘What ifs” – to assume that he would be responsible enough to take care of himself and to not let his mental illness cause him to harm anyone again? Continuing his life in prison is the only way his victims can feel comfortable and safe without being haunted,” she went on.

Her sentiments were echoed by the parents, brother and sister of Nicole Hadley, but Hollan Holm, who was shot in the head by Carneal and still bears the scar on his hairline, argued for his attacker’s release.

“I was still a child,” said Mr Holm, who was 14 at the time of the shooting and will turn 40 in December.

“Everyone in the lobby of Heath High School that day, including Michael Carneal, was a child. It’s taken me 25 years to fully appreciate how little I knew on that day – how much of life I had not lived and how far from adult I was in my thinking and my capacity. I am a different person today than I was on that day. I’ve gone from that day to start a family and have a career.”

Still, Mr Holm did not make light of the ramifications of Carneal’s actions.

“I still have trouble being in crowds of people,” he said. “I get anxious when I’m seated in a restaurant with my back to the door, when a series of small fireworks or popping balloons approximates that deliberate pattern of the gunshots from that morning. I can feel the colour drain from my face in panic.”

During Carneal’s appearance before parole board members on Tuesday, he said he was sorry for his crimes, but Ms Jones pointed out that, from medical records, the inmate’s prognosis remained “poor” after decades of treatment. He continued to experience “paranoid thoughts with violent visual imagery.”

Ms Jones also noted that Carneal’s family and legal team had sent letters to the board regarding his plea and plan for release, but they’d not received anything from the inmate himself, who seemed ill-equipped to handle the hearing he’d anticipating for more than half of his life. He also told board members that he does not “pay attention” to his mental health diagnoses, only doctors’ instructions.

Despite that, and his medication, he admitted voices were still telling him to do things as recently as a few days beforehand.

Watching his testimony, Ms Jenkins Smith was unswayed by his plea and shared in a Facebook post on Tuesday that she didn’t “think things went well for Michael today.”

“I was surprised the board couldn’t come to a unanimous decision, but I trust that the full board will do the right thing next week. I didn’t see any evidence that he’s any better today, 25 years later, or that he put much effort into preparing for this hearing, and I think the board saw that too,” she wrote. “From my view, he’s functioning and safe in prison, and so are we out here. Let’s keep it that way.”