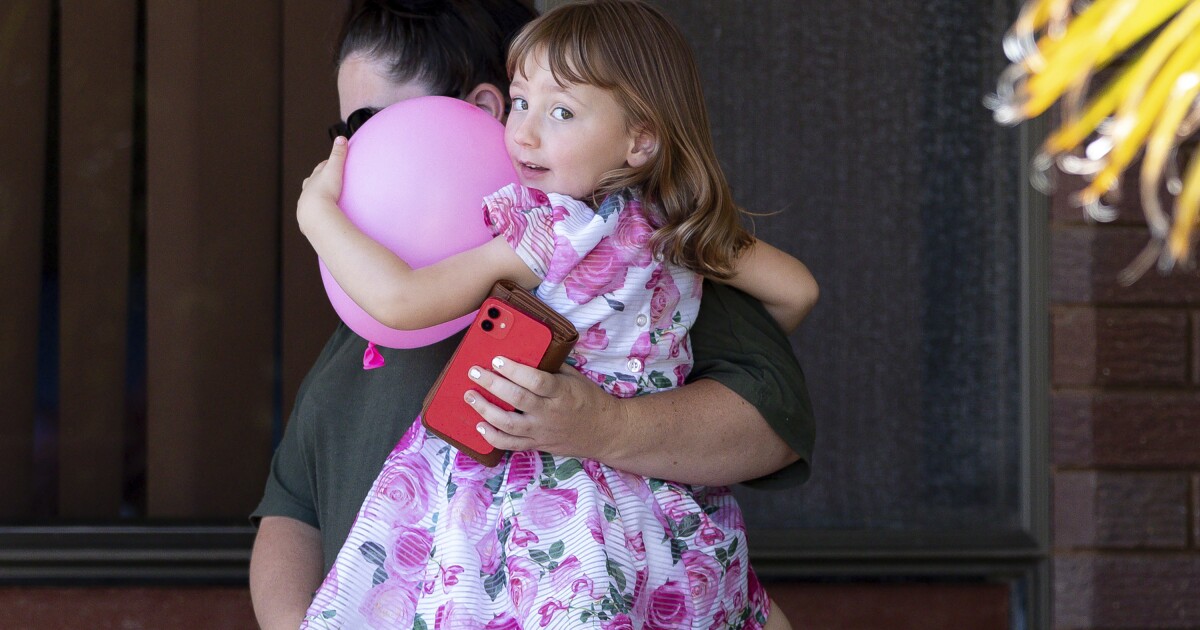 Cleo Smith was back to her laughing, bubbly self as she played in the backyard of her coastal Australian family home Thursday, hours before a 36-year-old stranger was charged with abducting the 4-year-old from a camping tent more than two weeks ago.

Police charged Terry Kelly, a local resident, with forcibly taking a child, among other offenses, a police statement said. Kelly appeared briefly in court in the town of Carnarvon, where a magistrate refused to release him on bail.

Police visited Cleo’s family in Carnarvon as they prepared to gather crucial eyewitness evidence involving Kelly, who is suspected of kidnapping the girl Oct. 16 from a campground north of the town of 5,000 people.

“I can only see her on the outside, but from that point of view, I’m amazed that she seems to be so well-adjusted and happy, and it was really … heartwarming to see that she’s still bubbly and she’s laughing,” Det. Senior Sgt. Cameron Blaine said.

”I’m sure that it has had an impact, but just to see her behaving quite naturally like a 4-year-old girl should do and just enjoying being in the presence of her little sister and her family was good,” Blaine added.

Blaine was part of a four-member police team that used a battering ram to smash into a locked house early Wednesday and rescue Cleo. The lights were on, and she was alone playing with toys in a house less than a 10-minute drive from her own, police said.

“My name is Cleo,” the smiling girl told the police officers who rescued her and asked her name as confirmation that they had found the right child.

Kelly was arrested in a nearby street at about the same time, police said.

Det. Superintendent Rod Wilde, who heads the police investigation, said specialist child interviewers had traveled to Carnarvon from the Western Australia state capital, Perth, about 560 miles to the south.

“The main concern around that is Cleo’s welfare,” Wilde said of the interview. “We have experienced people that will undertake that, and it’ll take as long as it takes. We’ll sit down with the family and work out the appropriate time.”

Police would not comment on whether Cleo was interviewed before Kelly was charged.

Media have reported that Kelly raised suspicion among other residents when he was seen buying diapers despite being known to have no children, but police have disclosed little information about what made him a suspect.

“It wasn’t a random tip or a clairvoyant or any of the sort of things that you might hear,” Police Minister Paul Papalia said. ”It was just a hard police grind.”

Kelly was taken from police detention to a hospital late Wednesday and again Thursday, with what media reported were self-inflicted injuries.

Asked about reports that Kelly was injured from banging his head against a cell wall, Western Australia Police Deputy Commissioner Col Blanch said only that there were ”no serious injuries.”

A police statement said Kelly’s “medical matter does not relate to any police involvement with him.”

Wilde said Kelly had since returned to the police station and was “speaking to officers.”

Wednesday was the first full night Cleo spent at home with her mother, Ellie Smith; her stepfather, Jake Gliddon; and her baby half-sister, Isla Gliddon, since the family’s ordeal began.

As they slept, public buildings in Perth were illuminated with blue lights to celebrate the success of the police investigation. In Carnarvon, balloons were raised on buildings and signs were posted welcoming Cleo home.

Western Australia Premier Mark McGowan also visited the family Thursday and commented on how “well-adjusted” the child and her parents seemed.

“She’s bubbly, playing, friendly, sweet. She was eating an icy pole; she spilled it every way. She told me it was very, very sticky, which I believed, and she was just delightful,” McGowan said.

McGowan said he gave her two teddy bears dressed in police uniforms, but she seemed unimpressed with his suggestion that she name them Cameron and Rod after the senior detectives leading her investigation.

Blaine, a homicide investigator, said he was uncertain whether Cleo recognized him from their first meeting when they met again Thursday. He described his reaction to finding Cleo alive as “shock, followed by elation.”

“We’d always hoped for that outcome, but were still not prepared for it,” Blaine said.

Xanthe Mallett, a criminologist at Australia’s Newcastle University, said finding a victim of stranger abduction alive after more than two weeks was rare.

The Carnarvon community’s willingness to help police find Cleo was likely a key factor in the investigation’s success, she said. Police had offered a 1-million Australian dollar ($743,000) reward for information, but don’t expect the money will be claimed.

“I always thought that this was going to be somebody with local connections because it was somebody who knew that campsite, so the fact that she was so close to that campsite and so close to Cleo’s home wasn’t a surprise to me,” Mallett said.

Police “engaged so well with that community and had them on board. They had the whole community’s eyes on everyone, reporting anyone suspicious. I think that was really key in this investigation — just great, old-fashioned, boots-on-the-ground police work,” Mallett added.