Lick of paint for Yemen’s historic Sanaa as truce holds 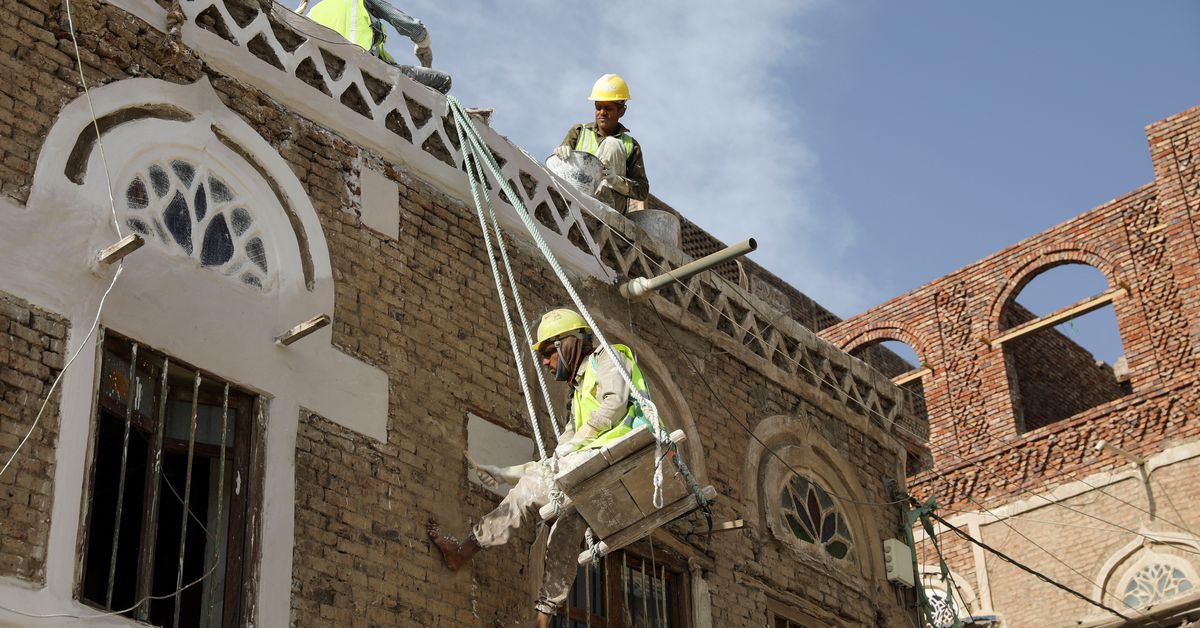 Others used pulleys and ropes to lift the city’s distinctive brown mud to the top of its damaged unique tower houses as the sounds of traffic and honking car horns replaced warplanes’ rumbling, thanks to a United Nations-brokered truce.

“We are dealing with historical buildings ranging from 300 to 350 years old, and each house is unique in its historical background and architectural style,” Kuhlani said. Old Sanaa dates from at least the eighth century.

Kuhlani added that his work with Yemen’s General Organistion for the Preservation of Historic Cities (GOPHCY) ranges from finding traditional material, securing and consolidating buildings and finally their renovation.

Sanaa and northern Yemen have faced thousands of air strikes from a Saudi-led coalition that intervened in the country’s civil war in 2015 after the Iran-aligned Houthi group ousted the internationally recognised government the previous year.

Both sides agreed in April on a U.N. ceasefire proposal that has suspended air, sea and land attacks while allowing imports into Houthi-controlled sea ports and a partial reopening of Sanaa airport. The truce is the first comprehensive agreement in the war that has killed tens of thousands and pushed Yemen to the brink of famine.

A worker sits on a scaffold as he renovates the facade of a house with gypsum as part of a UNESCO-supported project to restore homes in the old city of Sanaa, Yemen June 15, 2022. REUTERS/Khaled Abdullah

About 5,000 buildings were damaged including 380 that were seriously hit and were about to collapse in Sanaa’s historic neighbourhoods, said Aqil al-Nusairi, deputy chairman of GOPHCY.

“A large number of these buildings have been restored when the old Sanaa issued a distress call which was answered by some international donors… through the UNESCO,” Nusairi said.

Anas al-Shuaibi, owner of one of the tower houses, said the challenge was that residents were getting impatient as they were struggling with rent costs elsewhere pending the restoration of their homes.

In the course of war, bricks were used to seal windows in some buildings, replacing Sanaa’s unique coloured window glasses, as residents sought to protect their families from shrapnel.

“Everything in them is heritage.”