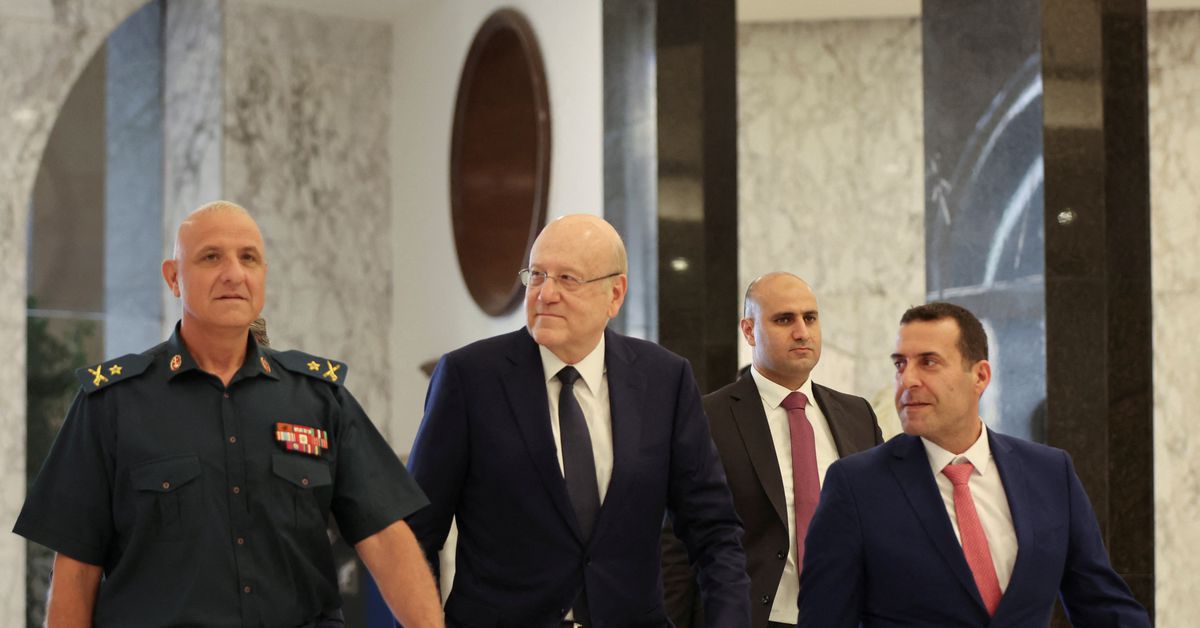 BEIRUT, June 23 (Reuters) – Lebanon’s Najib Mikati was namedprime minister on Thursday, urging fractious politicians to set aside differences to secure an IMF deal which he said was the only chance to save the country from financial collapse.

Facing a politically difficult path to agreeing on a new cabinet, the billionaire tycoon who led three previous governments said Lebanon did not have time for “drowning in conditions and demands” of rival groups over ministerial posts.

“We are facing the challenge of either complete collapse or gradual salvation,” said Mikati, referring to the IMF deal that promises $3 billion of support, contingent on reforms that have long been put off by Lebanon’s political elite.

Now in its third year, the financial meltdown has sunk the currency by more than 90%, spread poverty, paralysed the financial system and frozen depositors out of their savings, in Lebanon’s most destabilising crisis since the 1975-90 civil war.

Donor states want Lebanon to enact reforms to address root causes of the crisis, including decades of state waste and corruption, before aid is released. read more

“We have wasted enough time and lost many chances of support from brotherly and friendly countries whose stance has always been clear: ‘help yourselves so we can help you’,” said Mikati, a Sunni Muslim as required by Lebanon’s sectarian system.

Mikati, who hails from the northern city of Tripoli, remains in charge of a caretaker cabinet until a new government is formed.

He urged parliament to approve laws referred to it by the previous government that would pave the way to a final agreement with the IMF, including amendments to banking secrecy rules and capital controls.

He was nominated by 54 of parliament’s 128 lawmakers, including the Iran-backed Shi’ite Muslim party Hezbollah, in consultations convened by President Michel Aoun, the Maronite Christian head of state.

But with splits running deep among Lebanon’s ruling elite, it is widely believed Mikati will struggle to form a government, a process that can drag on for months as factions tussle over posts in cabinet and beyond.

Analysts and politicians expect the cabinet formation process to be further complicated by a looming struggle over who will replace Aoun, the Hezbollah-aligned head of state, when his term ends on Oct. 31.

Parliament – which elects the new president – emerged highly fractured from a general election last month. The heavily armed Hezbollah and its allies lost their majority, reform-minded newcomers made a strong showing and the Saudi-aligned Christian Lebanese Forces party gained seats.

Many lawmakers, including Hezbollah’s, called for cabinet to be formed quickly.

“We hope we do not fall into the logic that says there will be no government before a president,” Sami Gemayel, head of the Christian Kataeb party, said. “No one can hold out four months more given the situation we are in.”

Reflecting the new landscape, Mikatisecured around 20 fewer votes than when he was last designated prime minister in September.

Forty-six lawmakers named no one for the post, while 25 voted for Nawaf Salam, a former Lebanese ambassador to the United Nations and now a judge at the International Court of Justice.

An IMF deal is widely seen as the gateway to easing the financial crisis, but the political and financial elite remain divided on the details, including how to share out an estimated $70 billion in losses in the financial system.