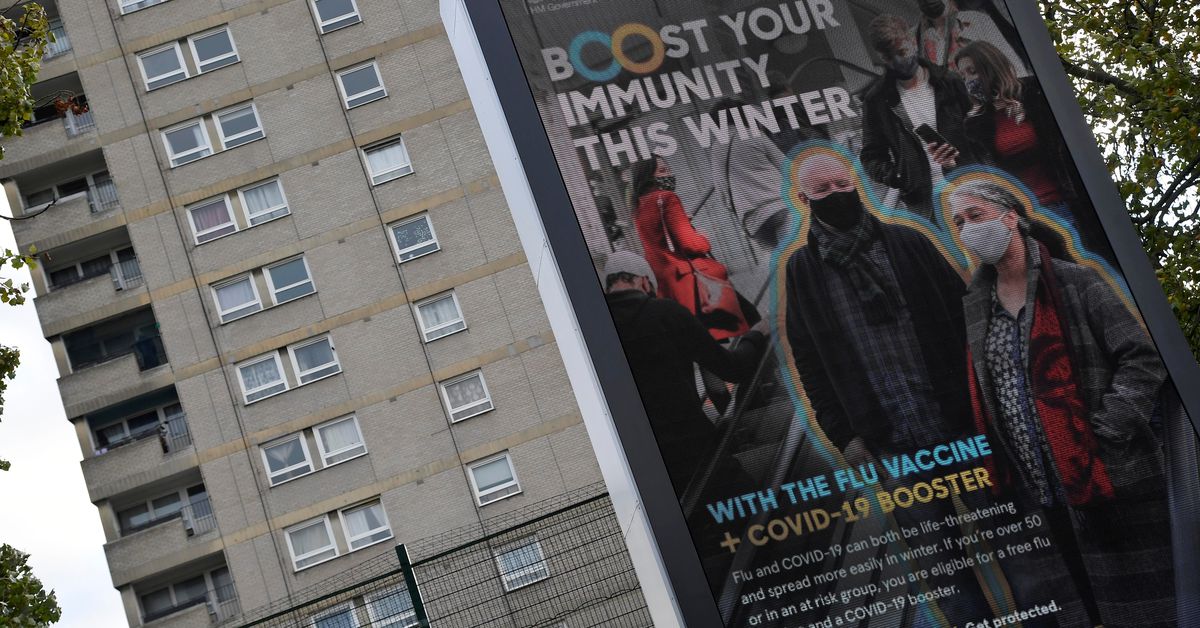 Britain, its hospitals and its COVID-19 strategy are under the microscope as the country enters the dangerous winter period while accounting for almost a tenth of the world’s recorded new infections.

Johnson outpaced many governments by lifting England’s pandemic restrictions in one broad stroke in July, betting the National Health Service will be able to take the strain after a successful vaccination campaign. Some health frontliners, virologists and pandemic modellers aren’t confident.

Even though COVID-19 hospitalisations are far lower than a year ago, the experts say pressures will be compounded by other winter viruses previously halted by lockdowns, as well as vaccine immunity fading and a backlog of treatment for other conditions.

“I wouldn’t take those warnings from NHS staff lightly at all,” said Imperial College London’s Pablo Perez Guzman, who works on one of three models used to advise the government.

“That is an amount of pressure that the health system might struggle to cope with. Definitely.”

While Britain’s new cases have persisted above 30,000 a day since early September, vaccines have driven deaths from COVID-19 down by about 90% compared to January levels.

Yet if the concerns of Perez Guzman and eight other specialists interviewed by Reuters prove well-founded, Johnson may be forced to implement his “Plan B” aimed at protecting the NHS from “unsustainable pressure”, involving mask mandates, vaccine passes and work-from-home orders. More economically damaging restrictions are not out of the question, scientists say.

The government said its focus was on administering vaccine boosters and inoculating 12 to 15-year-olds. It said the data didn’t yet show Plan B was necessary, though the contingency was held at the ready.

Stephen Griffin, a virologist at the University of Leeds, predicted that the state-funded NHS would “get overwhelmed again”.

“Even though COVID isn’t responsible for as many of the ICU places as it has been in the past, it’s still around a third of them, and that’s going up,” he told Reuters. “I don’t know how they’re expecting NHS staff to cope, mentally and physically.”

Others leaders considering their own tactics are closely watching this global test case of whether vaccination is enough to live with the transmissible Delta variant of the virus.

Italian premier Mario Draghi said last month that he believed Britain had erred by opening up on July 19, a lesson that the world could not exit the crisis “in an instant”.

“The United Kingdom, which was one of the countries that carried out the vaccination campaign with great speed, abandoning all caution, is now faced with about 50,000 daily infections and 200 deaths yesterday,” he told lawmakers.

“Even in the exit it will be necessary to exit gradually.”

Exits preoccupy intensive care nurse Carr, who had decided to retire on April 19 last year before he found out that Britain was facing the worst pandemic in a century.

Now the 58-year-old says staff are overworked, stressed and exhausted trying to keep pace with an influx of patients at St Thomas’ Hospital in London, where the prime minister said frontline workers saved his life last April.

“I absolutely detest walking towards the hospital when I go to work,” Carr said. “I have checked in and really don’t know how to get out.”

Guy’s and St Thomas’ NHS Foundation Trust said it recognised the pressure on staff from the current demand, and that it was recruiting more nurses and providing support. It added that its critical care survival rates were among the best in the country.

Data for hospitals in England – home to more than 80% of the UK population – shows that the cumulative pressures are already straining the system, even though the 1,000 new COVID-19 admissions each day are lower than the 1,500 seen a year ago and 4,000 in January. And winter is yet to come.

Hospital accident and emergency departments treated 1.39 million patients in September, the highest number for any month on record. About a quarter of those waited more than four hours for treatment – the highest proportion since at least 2010.

While Britain isn’t the only country confronting the challenges of COVID-19 while rebooting its health system, it was stretched long before the pandemic, with one of the lowest rates of hospital beds per capita in Europe. It has been hardest hit in the region by the disease with 140,000 deaths.

Johnson’s exit strategy diverges from many other big economies, including Germany, France, Italy and Israel, which have either retained some basic COVID-19 measures like mask mandates or reintroduced them in response to rising cases.

Masks are still asked for in certain settings in England, including on public transport and when meeting infrequent contacts in enclosed spaces, but there is no legal requirement. As a result, mask usage has declined significantly, government scientific advisers said in October.

“We do not understand why the government has removed mandatory mask wearing in transport and in indoor settings like shops because that doesn’t actually stop the economy functioning – but it would reduce infection,” Chaand Nagpaul, chair of the British Medical Association (BMA) council, told Reuters.

“The government clearly believe these simple measures do make a difference, yet they’re failing to act by not making these a requirement. Without other preventative measures put in place now, the challenges coming our way could go from being achievable to totally insurmountable.”

Britain has about 40,000 daily cases of COVID-19, according to the latest seven-day average. That total is second only to the roughly 74,000 a day in the United States, which has five times more people.

Nonetheless, the situation is better than some projected when Johnson ended England’s COVID-19 restrictions.

But daily case numbers never fell below 20,000 a day, and there are over 9,000 patients in hospital even before the colder winter months ratchet up the pressure on the health system.

While Britain excelled in its rapid initial rollout of vaccines, the programmes for booster shots and vaccinating children have been slower, just as the immunity in those vaccinated first starts to wane.

Only about a quarter of children aged 12 to 15 in England have had a shot, even though the government had hoped to have given all of them access to vaccines by last week.

“Regardless of how successful the booster vaccination campaign is, and other variables potentially considered, the NHS could still be put into under very high pressures,” said Imperial College London’s Perez Guzman.

“We have seen how time sensitive the introduction of measures are, and when introduction of public health interventions are delayed even by a few days or a week, the effect … on the potential epidemic trajectories can be quite severe.”