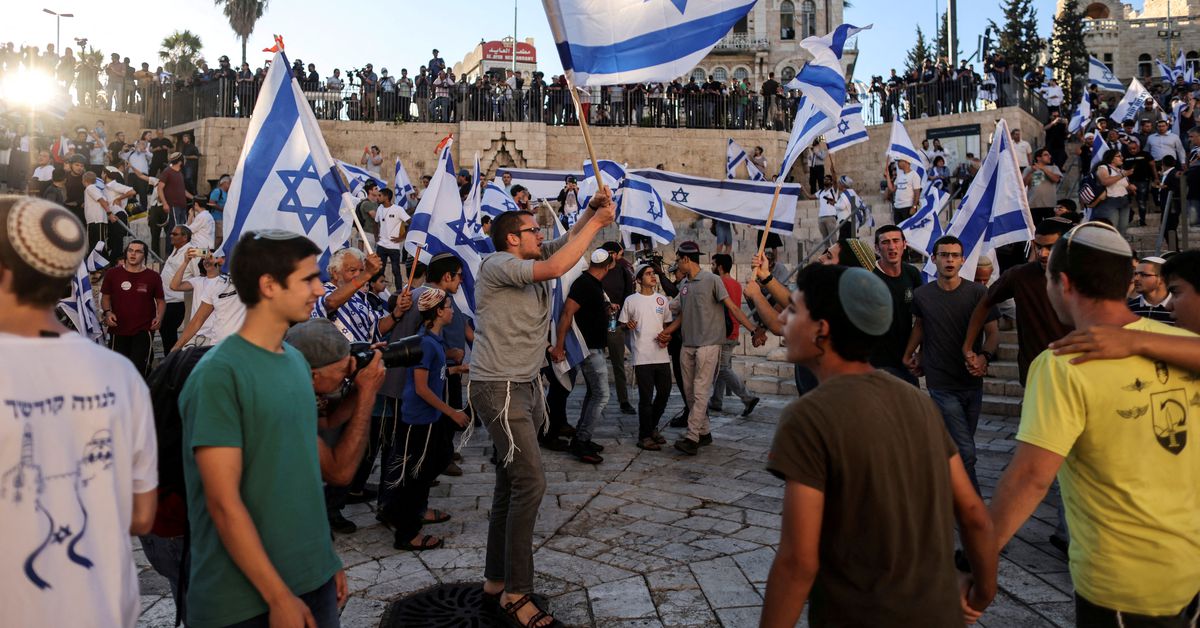 JERUSALEM, May 29 (Reuters) – Flag-waving Jewish nationalists are set to march through the heart of the Muslim quarter of Jerusalem’s Old City on Sunday in a parade that could re-ignite violence between Israelis and Palestinians.

The annual Jerusalem procession celebrates Israel’s capture of the Old City in the 1967 Middle East war and draws thousands of cheering, chanting participants to its narrow, stone streets.

But for Palestinians, the march is a blatant provocation and a violation of one of the few places in the city, increasingly hemmed in by Jewish development and settlement, which retains a strong Arab flavour. read more

Hamas, the Islamist group that rules the Gaza Strip, fired rockets into Israel at the start of last year’s procession, triggering an 11-day war that left hundreds dead.

On Saturday, the group issued a statement calling for Palestinians in Gaza, the West Bank and Jerusalem, along with Israel’s Arab minority – who are Palestinian by heritage and Israeli by citizenship – “to rise up on Sunday to defend Jerusalem and the Al-Aqsa mosque”.

Signs of turmoil were seen early in the day, as Israeli police deployed near the mosque and Muslim worshippers finished morning prayers.

A police spokesperson said a small group of people had barricaded themselves inside the mosque and were throwing large rocks towards the police officers stationed outside. There were no reports of injuries.

But despite calls for a rethink of the march from some of his own coalition allies, Prime Minister Naftali Bennett has refused to countenance any changes.

“The flag parade will be held as usual according to the planned route, as it has been for decades,” his office said on Friday, adding that it would review the situation regularly through the coming hours.

Jerusalem and its holy sites, revered by Muslims, Jews and Christians alike, lie at the heart of decades of Israeli-Palestinian conflict.

Israel sees all of Jerusalem as its eternal and indivisible capital, while Palestinians want the eastern section as capital of their future state. Hamas, deemed a terrorist organisation by Western governments, sees all of modern-day Israel as occupied.

Tensions have been rising in the city for weeks. read more

Repeated clashes took place between Palestinians and Israeli police in the Al-Aqsa compound in April, during the holy month of Ramadan, with Muslims angered by rising numbers of Jewish visitors to the mosque esplanade.

Al-Aqsa is the third holiest site in Islam. It is also revered by Jews as the Temple Mount – a vestige of their faith’s two ancient temples.

Sunday’s march is due to culminate at the Western Wall, a Jewish prayer site that sits below the Al-Aqsa mosques.