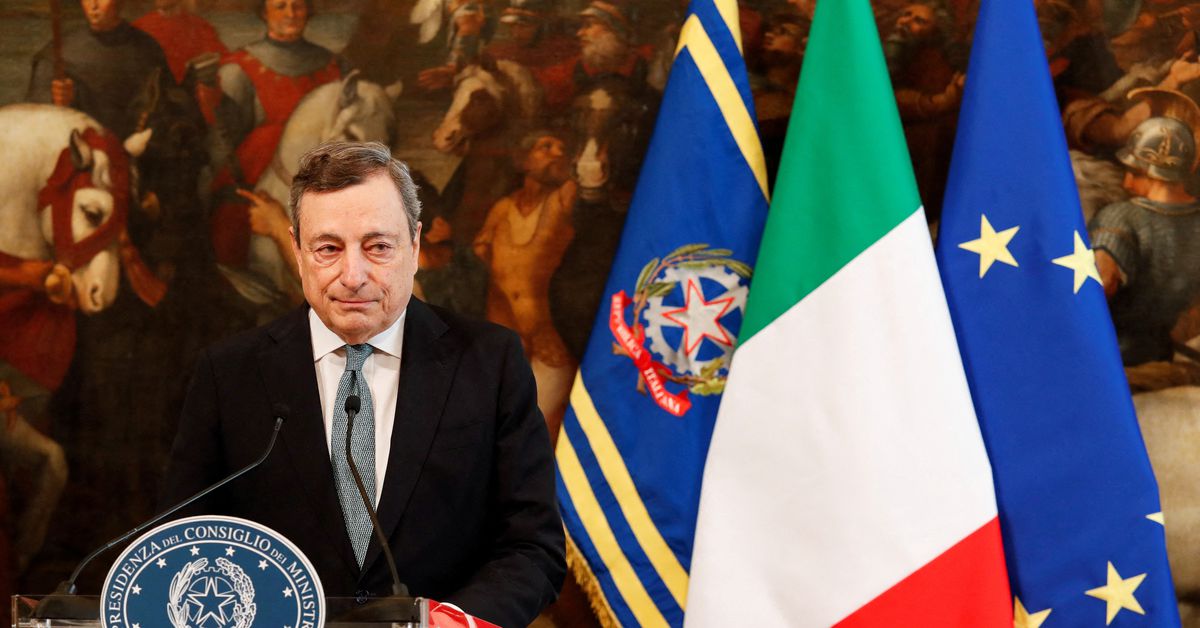 ROME, July 3 (Reuters) – Italian Prime Minister Mario Draghi and the leader of the 5-Star Movement Giuseppe Conte will meet on Monday to try to resolve tensions which could bring down Draghi’s 16-month old government.

Conte, who was Draghi’s predecessor as premier, took the reins of the 5-Star Movement after his own government collapsed in February last year, but relations with Draghi have grown more difficult as 5-Star’s fortunes have waned.

“We will discuss among our political bodies whether to remain in the government … Monday’s meeting will be important to clarify things,” Conte said at a gathering on Friday with 5-Star’s ally the Democratic Party (PD).

5-Star was the largest party in parliament until a split this month saw around 60 of its lawmakers leave to join a breakaway group led by Foreign Minister Luigi Di Maio, a former 5-Star leader. read more

Some of those who remained are urging Conte to pull out of the multi-party government, saying Draghi has watered down or scrapped its flagship measures and it has more chance of reviving its fortunes in opposition.

Draghi raised the stakes on Friday, telling reporters his government “cannot exist without the 5-Star Movement,” and saying he would step aside if it quit his coalition even though he would still have a majority in parliament.

He denied reports he had tried to persuade 5-Star’s founder, comedian Beppe Grillo, to kick out Conte as leader.

Conte will ask the premier to provide assurances on several policies championed by 5-Star which are in doubt due to opposition from Draghi or from other coalition parties, a 5-Star source told Reuters.

These include the “citizens’ income” poverty-relief scheme, the introduction of a minimum wage, and state subsidies for energy-saving home improvements.

Conte will also press his case over plans for a garbage incinerator in Rome, which 5-Star opposes, and over future Italian arms shipments to Ukraine which his party also opposes but on which Draghi shows no sign of relenting.

The meeting with Draghi will be preceded by a gathering of 5-Star’s top brass to finalise its position, the source said.

If 5-Star does quit the coalition, it would jeopardise its prospects of an alliance with the PD at a national election due early next year.

“If 5-Star pulls out that will be the end of the government and it will be impossible for us to run with them at the election,” Culture Minister Dario Franceschini, a prominent PD politician, said on Sunday.

The PD is currently polling on around 20% while 5-Star, which took 33% at the last election in 2018, has seen its support wither to around 12%, according to the latest surveys.