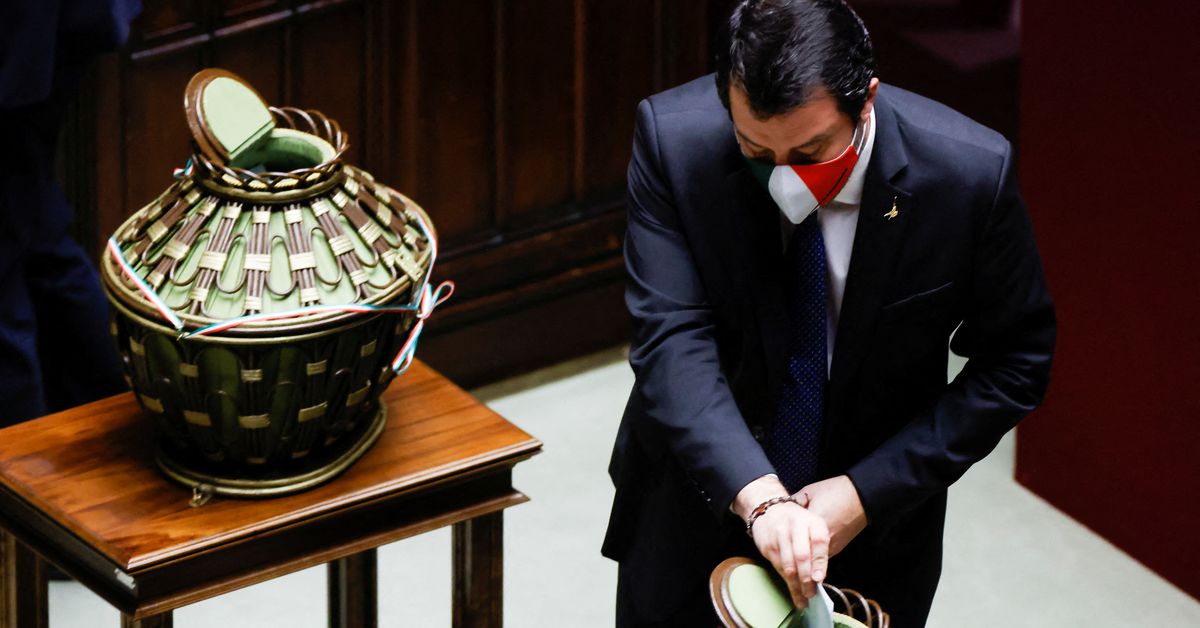 ROME, Jan 24 (Reuters) – The leaders of Italy’s main political parties met on Monday to seek a deal over a new head of state and break an impasse that threatens to derail Mario Draghi’s government and unleash political instability.

The series of meetings took place as parliament convened to replace outgoing President Sergio Mattarella, with Draghi among the most prominent candidates in a wide-open contest being closely monitored by financial markets.

The first round of voting, due to end at around 1830 GMT, is sure to be inconclusive as all the main parties have said they will cast a blank ballot as a way of playing for time in the absence of a political accord.

Draghi, who leads a national unity administration, has made clear he would like the prestigious job, which has a 7-year term and may be more appealing than heading up his fractious coalition ahead of elections due early next year.

However, with Italy facing a resurgence of COVID-19 infections and deaths, there is a reluctance among some parties to back Draghi for fear his departure could lead to a snap vote they want to avoid.

“At this difficult moment, it would be dangerous to remove Draghi from the post of prime minister,” rightist League leader Matteo Salvini said on Sunday, echoing remarks by his coalition partner Silvio Berlusconi who withdrew his own candidacy the day before. read more

Salvini was at the centre of Monday’s talks, separately meeting the leader of the centre-left Democratic Party Enrico Letta and former prime minister Giuseppe Conte, who heads the 5-Star Movement, the largest force in parliament.

After the meeting with Letta, Salvini and Conte said they were “working on some options” and would see each other again on Tuesday. 5-Star said there was agreement on the need to find a mutually acceptable candidate “that unites the country”.

Should Draghi fail to land the job of head of state, some commentators are suggesting he may not want to continue as prime minister either, if the coalition backing his government splits over the presidential election.

“Regardless of the outcome, the political equilibrium that has prevailed since Draghi became prime minister in February 2021 has been shaken, if not broken,” said Wolfango Piccoli of London-based political risk consultancy Teneo.

Markets, eyeing the risk of a snap election, were in wait-and-see mode on Monday, with assets mainly driven by tension over Ukraine.

Italy’s head of state is responsible for resolving political crises, making it a key role in a country where governments survive just one year on average. The president has the final say in nominating prime ministers and other cabinet members.

In a process that could take several days, more than 1,000 parliamentarians and regional representatives convened at 1400 GMT for the first round of secret voting. read more

The winner needs a two-thirds majority in any of the first three rounds, with an absolute majority enough thereafter.

If Draghi were to become head of state, a deal on another prime minister would be immediately needed to ensure that instability does not jeopardise Italy’s drive to receive some 200 billion euros ($226.80 billion) of EU pandemic relief funds.

Until recently, Draghi was considered almost a shoo-in to move to the presidential palace. With Salvini and Berlusconi now both calling for him to stay on as premier, his chances seem to have diminished, but he remains among the front runners.

Hard-right Brothers of Italy leader Giorgia Meloni, an ally of Salvini and Berlusconi, named several right-leaning figures on Monday as potential candidates for the conservative alliance.

These included current Senate speaker Elisabetta Casellati, one of her predecessors Marcello Pera and former economy minister Giulio Tremonti. It remains to be seen if any of these could attract support from the centre left.