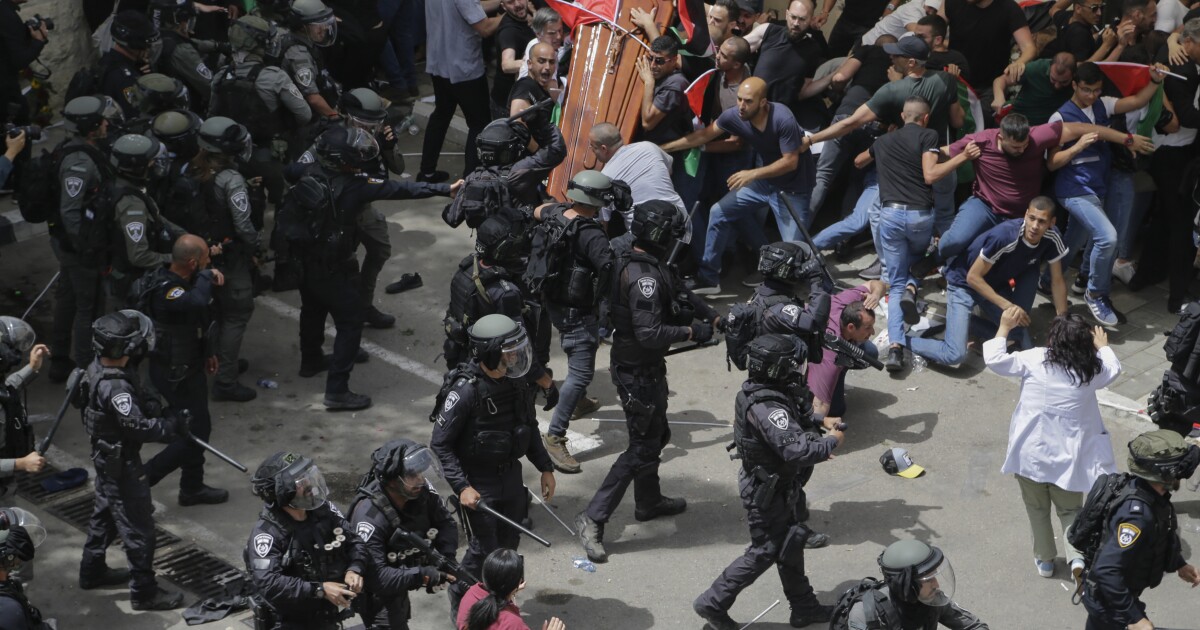 Israeli police decided on Saturday to investigate the conduct of their officers who attacked the funeral of a slain Al Jazeera journalist, causing mourners to briefly drop the casket during the ceremony in Jerusalem.

Police forces beat pallbearers with batons at the start of the funeral procession on Friday of Shireen Abu Akleh, who witnesses say was killed by Israeli troops Wednesday during a raid in the occupied West Bank. The Israeli military says Palestinian gunmen were in the area and it’s not clear who fired the fatal bullet.

The shocking scenes at the funeral, and the death of the 51-year-old Palestinian American journalist, drew worldwide condemnation and calls for investigations, including from the United States and the United Nations.

In a statement Saturday, the Israeli police said their commissioner has instructed an investigation that would be concluded in the coming days. “The Israel Police supports its police officers, but as a professional organization that seeks to learn and improve, it will also draw lessons from the incident,” the statement said.

The police say they used force as hundreds of “rioters tried to sabotage the ceremony and harm the police.”

The attack on the funeral added to a sense of grief and outrage that has followed the death of Abu Akleh, a veteran journalist and a household name across the Arab world. They also illustrated the deep sensitivities over East Jerusalem — which is claimed by both Israel and the Palestinians, sparking repeated rounds of violence.

Ahead of the burial, a large crowd gathered to escort her casket from an East Jerusalem hospital to a Catholic church in the nearby Old City. Many of the mourners held Palestinian flags, and the crowd began shouting: “We sacrifice our soul and blood for you, Shireen.”

Shortly after, Israel police moved in, pushing and clubbing mourners. As helmeted riot police approached, they hit pallbearers, causing one man to lose control of the casket as it dropped toward the ground. Police ripped Palestinian flags out of people’s hands and fired stun grenades to disperse the crowd.

On Friday, Secretary of State Antony J. Blinken said the U.S. administration was “troubled by the images of Israeli police intruding into the funeral procession” of Abu Akleh, who was also an American citizen. “Every family deserves to lay their loved ones to rest in a dignified and unimpeded manner,” he tweeted.

A unanimous condemnation came Friday from the U.N. Security Council, which called in a rare statement for “an immediate, thorough, transparent and impartial investigation into her killing.”

Late Friday, the Palestinian public prosecutor said preliminary findings show Abu Akleh was killed by deliberate fire from Israeli troops. The prosecutor said the investigation would continue. Israel’s military said earlier Friday that she was killed during an exchange of fire with Palestinian militants, and that it couldn’t determine the source of the shot that killed her.

Israel has called for a joint investigation with the Palestinian Authority, and urged it to hand over the bullet for forensic analysis to determine who fired the fatal round. The PA has refused, saying it will conduct its own investigation and send the results to the International Criminal Court, which is already investigating possible Israeli war crimes.

The PA and Al Jazeera, which has long had a strained relationship with Israel, have accused Israel of deliberately killing Abu Akleh. Israel denies the accusation.

She was shot in the head Wednesday morning during an Israeli military raid in the West Bank town of Jenin.