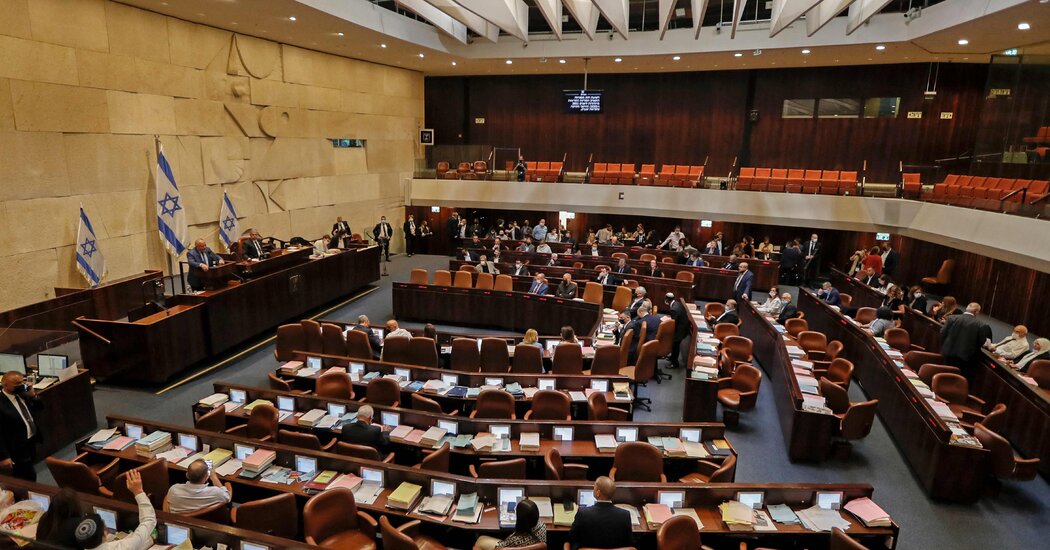 JERUSALEM — Israel’s Parliament narrowly approved a state budget on Thursday, the country’s first in more than three years, removing an imminent threat to the survival of the government that could bring some political stability after a chaotic stretch of four elections within two years.

But the razor-thin majority eked out by Prime Minister Naftali Bennett’s coalition of eight parties with clashing ideologies and disparate agendas raised questions about whether the government could last out its four-year term and end Israel’s prolonged political morass.

The governing coalition, made up of right-wing, centrist and left-wing political factions as well as a small Arab Islamist party, has been bound together mostly by its desire to keep Mr. Bennett’s predecessor, Benjamin Netanyahu, out of office. So far, that common interest has staved off internal battles as the coalition partners focused on approving a budget.

“It’s a miracle that it stays together,” Reuven Hazan, a professor of political science at the Hebrew University of Jerusalem, said of the coalition. “The reason it does is Netanyahu, who is still around and ahead in the polls.”

The coalition was presenting the budget as its greatest achievement to date and proof that the so-called “government of change” can work.

“A holiday for the state of Israel!” Mr. Bennett exulted on Twitter shortly after the pre-dawn vote to approve the budget. “We are moving ahead with full force.”

The previous Parliament dispersed late last year after it failed to meet the deadline for approving a budget for 2020. That was because Mr. Netanyahu, who was prime minister at the time, did not even present a budget — a maneuver he orchestrated to bring down his own government and force new elections.

By doing so, he was able to avoid honoring an agreement that would have seen his main coalition partner, Benny Gantz, from a rival, centrist party, take over as prime minister had their government survived.

But that political gambit led to the March 2021 election that ultimately unseated Mr. Netanyahu, Israel’s longest-serving prime minister, who is on trial on corruption charges. Mr. Netanyahu had wanted to fight his case from the prime minister’s office, a position that also offered him his only chance of gaining some kind of immunity.

The vote on the annual budget for what is left of 2021 passed by 61 to 59 in the 120-seat Knesset, or Parliament. Voting on a budget for 2022 was expected to conclude late Thursday or on Friday.

The 2021 budget was approved after a marathon debate that included a four-hour speech by a filibustering member of the opposition. A 60-60 draw would have meant failure. And if the Knesset did not pass a budget by Nov. 14, that would have led to the automatic dissolution of the legislature and new elections within three months, which was the goal of an opposition faction led by Mr. Netanyahu.

Now that the government has passed the budget milestone, it will be far harder for the opposition to topple it.

To do so would require a no-confidence vote backed by a majority of 61 lawmakers who all agreed on a replacement prime minister and government. That prospect, experts said, appears unlikely because the opposition, made up of right-wing, ultra-Orthodox and leftist Arab factions, is as ideologically divided as the government itself.

“It’s kind of a summary of the differing wills of this government,” Nachman Shai, the minister of diaspora affairs from the Labor party, said of the agreement on a budget and its approval. He noted that a faction like his with roots in socialism had managed to compromise with others that support a free-market economy.

“It looked like mission impossible,” he said in an interview.

To keep the coalition together, the partners have agreed on basic guidelines that preclude grand moves on the diplomatic front, such as allowing the establishment of a Palestinian state or, conversely, annexing tracts of the occupied West Bank.

But lower grade issues of contention are already dividing coalition members, such as recent approvals of new construction in Jewish settlements in the West Bank, pressure from the Biden administration to reopen a consulate for Palestinian affairs in Jerusalem and the fate of a rogue West Bank settler outpost set up in the last days of the last government.

“I am not suggesting it will be a honeymoon,” Mr. Shai said of the post-budget period. But he added hopefully, “On any issue, there can be a compromise.”

Some analysts are less sanguine, however, about what may transpire as disagreements within the coalition come to the fore. Most parties in the alliance, including Mr. Bennett’s right-wing Yemina faction, only won seats in Parliament in the single digits, yet each holds veto power over the government.

The coalition partners have little interest in a new election.

But Professor Hazan cautioned that there are multiple ways in Israel of bringing down a government and because of the coalition’s slim majority, it would only take one or two disgruntled lawmakers to cross the lines and vote with the opposition for the Knesset to dissolve itself.

So far, the government has introduced a plan to combat violence within the Arab community, has successfully brought a fourth wave of the coronavirus under control, is chipping away at the ultra-Orthodox monopoly over issues such as the licensing of kosher food and has ushered in a general sense of normality and national responsibility.

But it is still early days.

Mossi Raz, a lawmaker from Meretz, a left-wing party in the coalition which opposes Israel’s settlement policies, said that his party had participated in governments led by Labor leaders in the past that also built many homes in Jewish settlements.

But then, he said in an interview, “We could hope that there would soon be progress” toward a peace deal, “so it didn’t matter what they built. That does not exist now.”

He said his party could not be part of a government that, for example, evacuated Khan al-Ahmar, a tiny Bedouin hamlet built without permits in the West Bank that has long been slated for demolition.

“I don’t think anyone intends to do it,” Mr. Raz said, alluding to international pressure. “But if it happened, it would be without us.”

Along with internal frictions, Mr. Bennett’s government has also had to withstand intense attacks from the pro-Netanyahu camp that critics say have bordered on incitement to violence. An ultra-Orthodox lawmaker accused Mr. Bennett this week of having “betrayed his voters and betrayed the state of Israel.”

Netanyahu loyalists have made unsubstantiated allegations about financial ties between Raam, the Islamist party in the coalition, and Hamas, the militant group that controls Gaza, branding the current Israeli government as one that relies on supporters of terrorism.

“They didn’t give it a month to survive,” Orit Galili-Zucker, a strategic communications adviser who once worked for Mr. Netanyahu, said of his loyalists. “It survived and kept its nerve in the face of terrible incitement.”

Now things could go either way. With the budget approved and the immediate threat of the dissolution of Parliament removed, some disillusioned members of the opposition could choose to join and shore up the coalition.

Or it could all break apart.

“The biggest enigma,” Ms. Galili-Zucker said, “is if this government will endure after the budget.”