India’s addicted to coal. But for how much longer?: Reporter’s Notebook 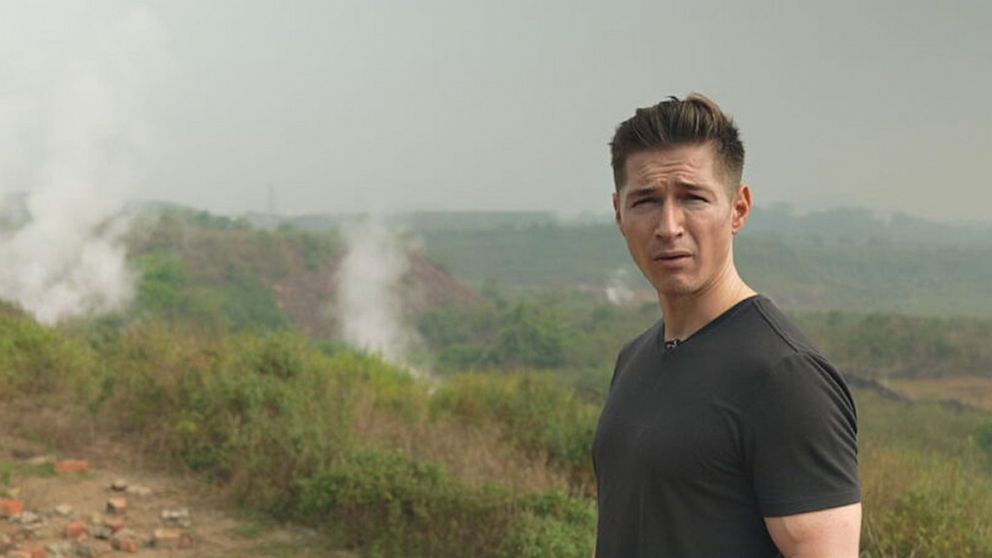 Sapna has a smiling face and a bright red sari. She stands on the doorstep of the small hut she calls home, her daughter huddled slightly behind her, and ushers us inside.

The courtyard is only about 15 feet across. Washing hangs overhead, and some plants sit wilting in the heat next to the door of a small living area.

She takes a large plastic container full of water and pours it all on the floor in front of us. Immediately it starts to steam. And then I realize what Sapna is trying to tell me: The floor we’re standing on is hot from the mine beneath our feet.

Coal burns underground for 24 hours a day, and its heat has made the floors of these homes hot to the touch. In a country where summer temperatures can exceed 120 degrees Fahrenheit, Sapna’s floor is almost boiling hot. I bend down to touch it, and it’s genuinely almost scalding.

She’s worried her home will subside. Her neighbors have pointed to cracks in their homes. Some have already fallen apart.

But burning coal doesn’t just emit heat. There’s a more immediate danger. All around this place, hot carbon dioxide-filled smoke billows up from cracks in the earth.

The smoke is everywhere, the scene is apocalyptic. Children play in a hot toxic vapor that’s doing irreparable harm to both their lungs and the planet.

But their families can’t leave, even though the mining company has offered to move them. Their jobs are in coal or its related industries. Their livelihoods depend so much on coal, it seems like it’s worth dying for. And for people earning as little as $7 a day, it really is a matter of life or death.

This village sits on a mine in India’s coal belt, in the east of the country. It’s rural, dirty and very, very poor.

Like in the U.S., coal is a major part of India’s economy. The difference is, coal is the backbone of this country’s economic and political life, and mines are expanding here to meet demand.

Coal India is the country’s largest employer. It even subsidizes the railways. Some 70% of the energy used by the 1.3 billion people here is generated from coal.

And while India is the third-largest polluter after China and the U.S., its energy needs over the next 20 years are set to rise faster than both. The sheer amount of development still to come, and the sheer number of people, means the nation’s carbon emissions could skyrocket.

The depth of poverty here and the desperate need of so many of his people is why Prime Minister Narendra Modi said he’ll only commit to net-zero by 2070.

Why, when it was the industrialized nations who started the problem, should India pay the price? The average Indian generates far less carbon than the average American. (By some estimates, it takes seven Indians to generate as much as just one American.) Some argue it’s better to link an emissions target to a country’s GDP — a calculation more in line with a country’s wealth. It seems a fair argument.

But there are political concerns. Like some in the U.S. whose political fortunes are tied to energy companies, Modi must weigh domestic policy interests in dealing with the pressure of foreign expectations. And the West, too, should be wary of applying too much pressure, and hindering the Indian development seen as a bulwark against China.

But India is also doing amazing things with green energy — hitting targets some of the more-developed nations are falling behind on — achieving its 30% renewables target. Modi said India will hit 50% by 2030.

The air pollution issue in Delhi has already forced the adoption of greener options: All public transport must either be natural gas or electric. Local politicians have just made electric the much more appealing option. There hasn’t been some kind of climate crusade here, where the very poor have been berated for killing the climate.

I took a ride on an electric rickshaw, and for the driver, electric was a no-brainer — cheaper than gas, much more convenient. He can concentrate on feeding his family, and Delhi’s air pollution problem can be mitigated.

Now, in many ways, if it’s using the grid, electricity just moves the problem from the street to wherever the energy is generated — and in India, that’s mostly coal. The grid is badly in need of an upgrade — part of the reason why India said it needs foreign cash injections.

India also needs a better plan for transition, having developed a lot of renewables but not yet clearly stating how they’ll come to replace coal, rather than merely coexist. And watch that phrase “installed capacity.” It doesn’t mean India — or any country — has a grid capable of using that capacity. It’s a subtle but important difference between generating energy and making sure it’s all used.

But changes are coming.

One Sun, One World, One Grid — which forms the slightly unappealing acronym OSOWOG — is an initiative Modi unveiled at COP26. It’s an idea to link 140 countries with a mega grid, harnessing the power of the sun, so when it’s up in one country, it can meet the power needs of a country where the sun has set, or in my case, isn’t shining. The thought that one day my home in London could be heated with the power of the Indian sun is rather magical.

There are a lot of challenges here. But India is a country where entrepreneurship and invention thrive. It’s a country of incredible engineering and technological innovation.