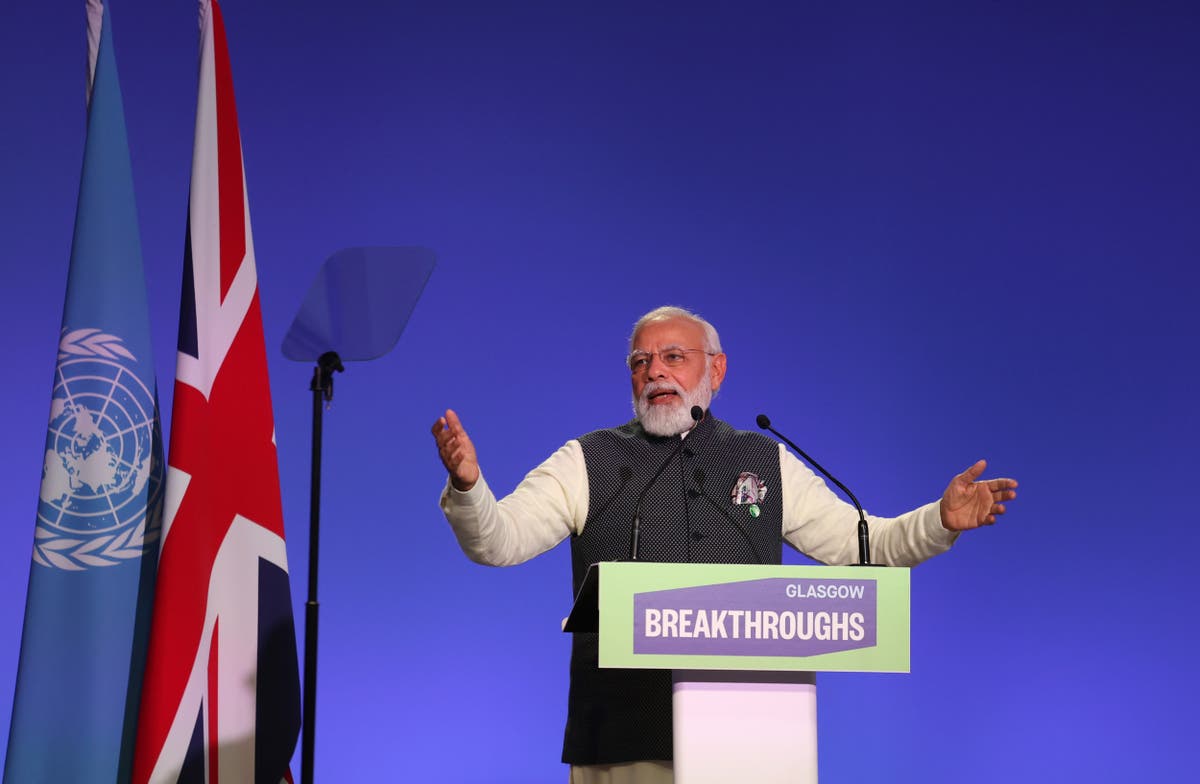 Almost nine months after Narendra Modi committed India to a net-zero goal and a drastic increase in the share of renewables, the country’s cabinet has finally approved an enhanced climate action plan, adding more ambitious targets but leaving some expected goals out.

The national climate plan approved by the country’s union cabinet on Wednesday formalises a part of the pledges announced earlier in Glasgow and paves the way for adopting them as the country’s official climate goals after submission to the United Nations Framework Convention on Climate Change (UNFCCC).

This adoption of pledges, which was expected to be formalised around Cop26 in Glasgow, comes late but adds significant ambition to India’s climate action goals ahead of the next session of Cop27 in Sharm Al Sheikh starting in November.

Once submitted to UNFCCC, the pledges will form India’s enhanced Nationally Determined Contributions (NDCs), the voluntary goals of emission reduction each country sets for itself.

The NDCs are at the heart of the global fight against climate change based on the 2016 Paris agreement that aims to keep global warming from rising more than 2C. A significant emission reduction by the world’s third largest emitter can be a make or break point for these efforts.

With these newly formalised pledges, India is committed to reducing the emissions intensity of its GDP by 45 per cent by 2030, compared to its earlier goal of 33-35 per cent.

It also aims to ensure 50 per cent of electricity will come from non-fossil fuel sources but not half of all energy use, something that was left unclear in Mr Modi’s speech at Glasgow and sparked some confusion.

While this is an important goal for the largely coal-dependent country, experts say it is a more realistic and achievable target than aiming for half of its energy needs to be met from non-fossil fuel sources, something that would have made India’s climate action plan a lot more ambitious.

India’s current non-fossil fuel capacity, which includes nuclear, large hydro dams, wind and solar power, is around 40 per cent, in line with its previous goals. But coal is still the biggest source of energy.

In his Glasgow announcement, Mr Modi said India would target generating 500 gigawatts (GW) of power or output from non-fossil fuel sources – up from its current output of 157GW – but that promise did not make it into the plan.

“Only a part of what was announced in Glasgow now gets enshrined in India’s NDC. The target of having 50pc installed capacity of non-fossil fuel-based targets by 2030, compared with 40pc non-fossil fuel-based targets we have today shows that while the direction of travel is good, the pace could have been faster,” says Aarti Khosla, director of Delhi based Climate Trends.

Madhura Joshi, senior associate at India Energy Transition Lead, E3G, says while these targets are lower than Mr Modi announced, these are “actionable” for India.

Also at Glasgow, Mr Modi announced a 2070 target for carbon neutrality, two decades later than most countries. The new climate plan indicates that these pledges are a “step towards achieving India’s long-term goal of reaching net-zero” but it remains to be seen if this long-term goal will be a part of the official submission.

Dr Vaibhav Chaturvedi, a fellow at the Delhi-based Council on Energy, Environment and Water (CEEW), also voices the expectation that the 2070 goal should be included in the official document.

“That India’s ambition has been enhanced in the post-pandemic scenario needs to be emphasised and appreciated,” he says. “The press release explicitly states that the enhanced NDC is a step towards the net-zero goal, GoI should now follow this with explicit inclusion of the 2070 net-zero pledge in its yet-to-be-submitted long-term strategy to the UN.”

India still holds its demands for more action from richer countries and the need for climate finance. Mr Modi said rich nations should provide 1 trillion dollars to poorer nations suffering the brunt of the climate crisis created by a handful of developed countries.

Climate finance remains a contentious issue in negotiations. Rich countries have so far failed to deliver on the promise to collectively deliver $100 billion of climate finance a year by 2020.

Experts also say that while India’s eventual goal of being carbon neutral will require systemic changes, including shifting subsidies to clean energy and increasing investments, the adoption of more ambitious targets puts it in a more vital place to negotiate with richer countries.

“With an upcoming Cop and a G20 summit in India next year, these actions can strengthen India’s negotiating power, especially around climate finance from the global north,” says Balasubramanian Viswanathan, policy advisor at the International Institute for Sustainable Development.

The new plan also includes a commitment to a healthy and sustainable lifestyle, termed ‘LIFE’– ‘Lifestyle for Environment’ as a key to combating climate change”. Experts say while the stress on sustainable lifestyle in the NDCs is noteworthy, certain aspects like sectoral emission curbs, health and cleanliness are lacking in the plan.

“It is clear that India does not envisage sectoral emission reduction obligations as part of its NDC at least till 2030. The NDC does not bind it to any sector-specific mitigation obligation or action. On the other hand, it rightly emphasises the value of a sustainable way of living as an effective and just solution to the problem of climate change,” says RR Rashmi, distinguished fellow at The Energy and Resources Institute (TERI).

These new pledges also come as India suffers extreme weather events one after another. This year’s record-breaking heatwave, something that scientists say has been made worse due to climate change, caught the country unprepared to deal with the challenges. That included multiple deaths recorded due to the heatwave and the agricultural sector left in deep distress, leading to an export ban on wheat and other key crops amid a global food shortage.

The unprecedented temperatures are now being witnessed in large parts of Asia and Europe with floods ravaging Bangladesh and northeast India. These extreme weather events will be at the centre of the upcoming climate negotiations, making the issue of climate finance for adaptation even more urgent.