India celebrates Diwali, festival of lights, with lamps and another Guinness World Record 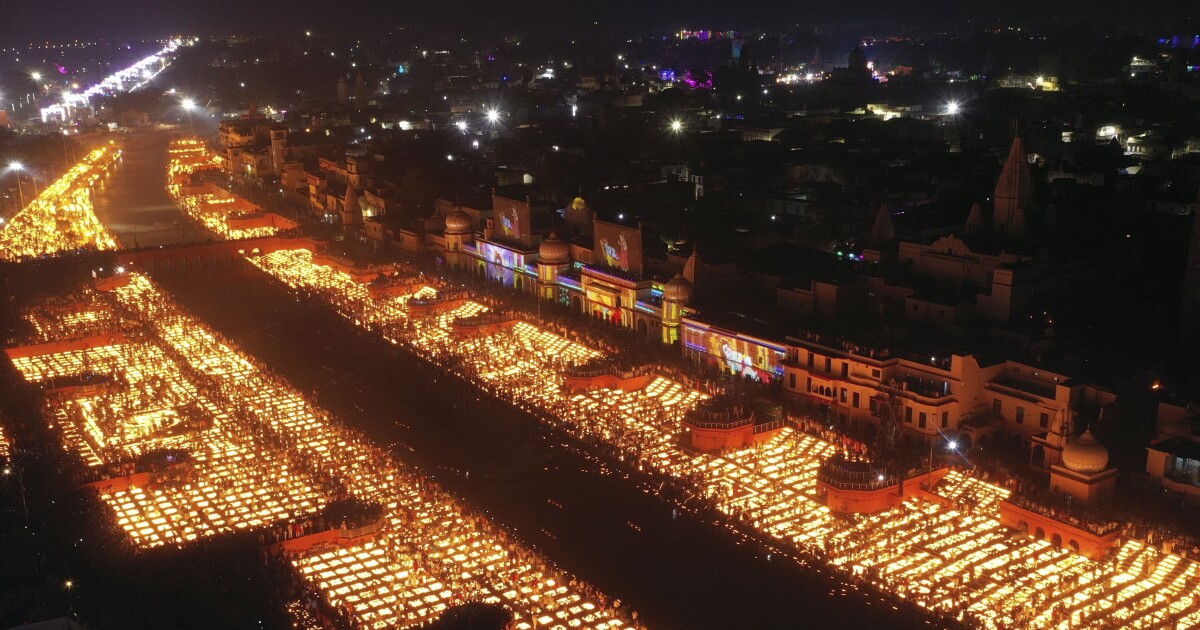 People across India began celebrating Diwali, the Hindu festival of lights, Thursday amid concerns over the COVID-19 pandemic and rising air pollution.

Diwali is typically celebrated by socializing and exchanging gifts with family and friends. Many light oil lamps or candles to symbolize a victory of light over darkness, and fireworks are set off as part of the celebrations.

Last year, celebrations in India were upended by a renewed spike in coronavirus infections, but festivities this year seem to be back. Even though the government has asked people to avoid large gatherings, markets have been buzzing ahead of Diwali, with eager crowds buying flowers, lanterns and candles.

As dusk fell Wednesday, more than 900,000 earthen lamps were lit and kept burning for 45 minutes in the northern city of Ayodhya, in Uttar Pradesh state, retaining the Guinness World Record it set last year. As part of the Diwali celebrations, the city last year lit 606,569 oil lamps.

The lamps were lit at Ram ki Pauri, on the banks of the river Saryu, in a stunning spectacle for thousands of visitors who thronged its shores while ignoring coronavirus social-distancing norms. A laser and fireworks show followed, illuminating the city’s lanes and river banks. Thousands of residents also lit lamps at their houses and temples.

The festival is being celebrated at a time when India’s pandemic crisis has largely subsided.

On Thursday, the country recorded more than 12,000 new coronavirus cases and 461 deaths, a far cry from earlier this year, when India buckled under a few hundred thousand new infections every day. Overall, it has recorded more than 35 million infections and over 459,000 deaths, according to the Health Ministry. These figures, as elsewhere, are likely undercounts.

Even states where infections were swelling a few weeks ago, such as Kerala along the tropical Malabar Coast, have seen a sustained decline. India also celebrated administering its billionth COVID-19 vaccine dose last month, further boosting confidence that life is returning to normal.

Still, experts have warned that the festival season could bring a renewed spike in infections if coronavirus health measures aren’t enforced.

There are also worries over air pollution, which typically shrouds northern India under a toxic grey smog at this time as temperatures dip and winter settles in.

On Diwali night, people also light up the sky with firecrackers — their smoke causing pollution that takes days to clear.

While there is no nationwide ban on firecrackers, a number of states have imposed restrictions to curb the pollution, with some allowing residents to light green crackers for a certain number of hours. Green crackers produce fewer emissions than normal firecrackers. In the past, similar bans have often been flouted.