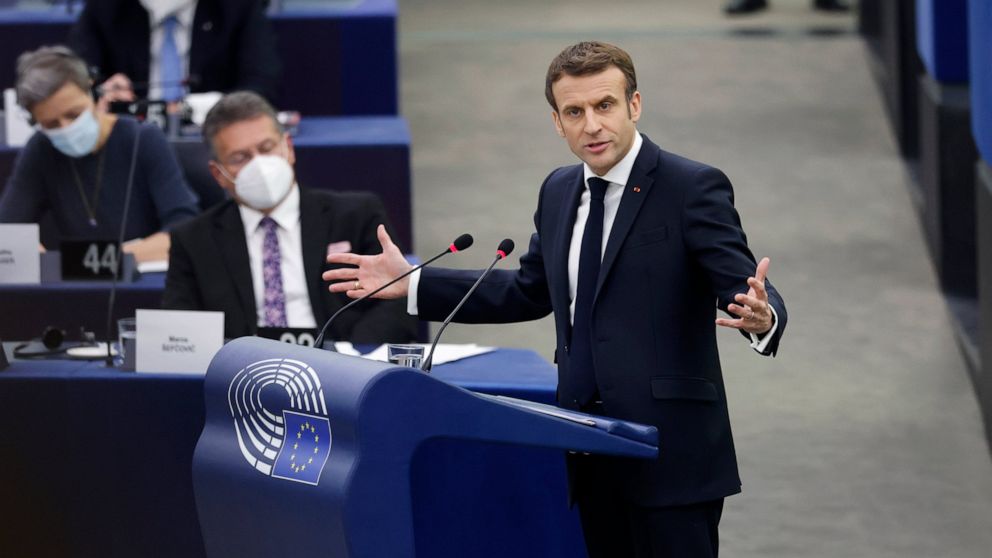 The EU must in coming weeks “complete a European proposal building a new security and stability order,” Macron said. “We should build it among Europeans, then share it with our allies in the framework of NATO, and then propose it for negotiation to Russia.”

Macron’s remarks to EU lawmakers in Strasbourg, France, came the day after NATO Secretary General Jens Stoltenberg said the military organization was in the process of finalizing its own security proposals. Stoltenberg hopes to set up a series of meetings with Russia in the near future.

U.S. Secretary of State Antony Blinken was in Kyiv on Wednesday and plans to meet with Russian Foreign Minister Sergey Lavrov in Geneva on Friday.

Macron told European Parliament members that France and Germany were working to revive the format for talks between Russia and Ukraine that have been aimed at ensuring full respect of a 2015 peace agreement between the two countries.

France and Germany’s efforts in 2015 helped end large-scale hostilities in eastern Ukraine, where Ukrainian forces have been fighting Russia-backed separatists since 2014. But the conflict, which has left around 14,000 dead, has simmered.

“We will ensure that Europe’s voice is heard, unified and strong, on the question of strategic weapons, the control of conventional weapons, the transparency of military activities, and the respect of the sovereignty of all European states, regardless of their history,” Macron said.

Top officials believe Putin has tried to divide the 27-nation bloc, the United States and NATO – which also has 21 EU members – with security demands that include halting NATO’s expansion and limiting the alliance’s presence in Eastern Europe.

It was not immediately clear how, or even if, Macron’s proposals would dovetail with those of NATO.