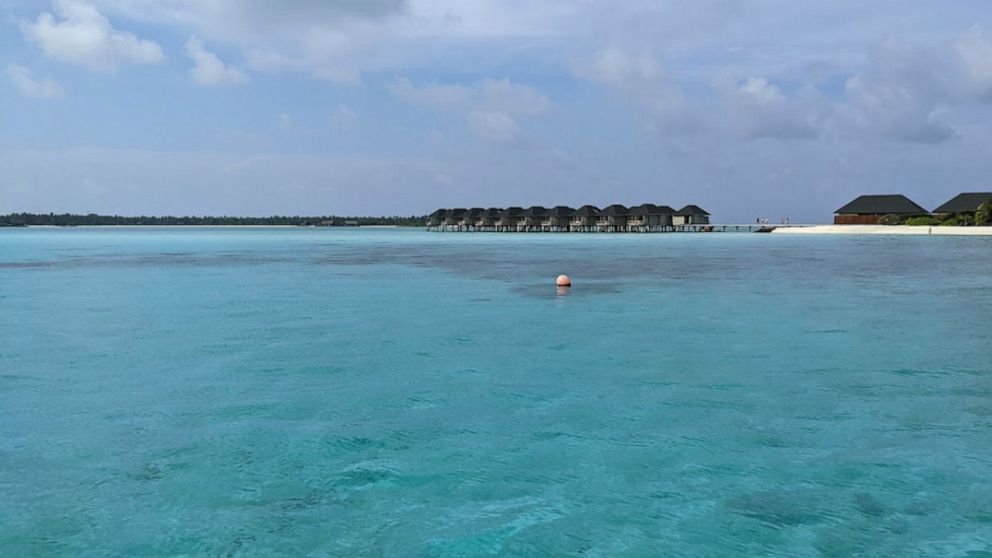 The Maldives are well known as a bucket list getaway. Hearing the country’s name conjures up images of luxury huts overlooking an aqua blue ocean. But climate change may cross the country off the map completely.

The archipelago, which is made up of over 1,100 coral islands in the middle of the Indian Ocean, is the lowest lying nation in the world. Therefore, sea level rise caused by global climate change is an existential threat to the island nation. At the current rate of global warming, almost 80% of the Maldives could become uninhabitable by 2050, according to multiple reports from NASA and the U.S. Geological Survey.

“Our islands are slowly being inundated by the sea, one by one,” Ibrahim Mohamed Solih, the president of the Maldives, told the U.N. Climate Change Conference, or COP26, earlier this week. “If we do not reverse this trend, the Maldives will cease to exist by the end of this century.”

The islands that are home to local Maldivians, not the resort islands, stand to lose the most. Mohammed Nasheed, the former president of the Maldives and a leading voice for climate change equity, told ABC News that more than 90% of islands in the Maldives have severe erosion, and 97% of the country no longer has fresh groundwater.

Ibrahim Mubbasir and his family live on the island of Dhiffushi. It is suffering from severe erosion, and flooding has increased from two or three times a year to twice a month. Four years ago, the family’s well became unusable because of salt water contamination, leaving them to rely on collecting rainwater. Mubbasir said they only have enough fresh water to last for three more months.

“Things that we thought would happen towards the end of the century, we are experiencing now,” Aminath Shauna, the Maldives’ minister of environment, climate change and technology, told ABC News’ Ginger Zee.

Shauna said that more than 50% of the national budget is spent on adapting to climate change. When asked what the Maldives will look like in 2050, Shauna responded, “Are you willing to take the Maldives as climate refugees? I think that’s the conversation that needs to happen.”

And it’s not just the Maldives. Island countries around the world have been asking developed nations for funds since 2009. Countries with the highest greenhouse gas emissions — China, the United States and India — are mostly responsible for the rapid sea level rise.

At the center of the Maldives’ culture are their coral reefs.

In 2016, the Maldives lost their front line of defense when a bleaching event affected about 60% of the coral reefs, according to Aya Naseem, a marine biologist and co-founder of the Maldives Coral Institute.

Without coral reefs, the islands are wide open to the rising waters. Naseem said they have one realistic choice: They need to build back and protect the reefs, “because IPCC (Intergovernmental Panel on Climate Change) is predicting that by 2050 if the temperature rises 1.5 degrees Celsius we can lose 70 to 90% of corals in the whole world.”

“It’s much cheaper than building a seawall. I think it costs something like $3,000 to grow a meter of sea wall where for the coral a meter of it is about $300, including monitoring and everything,” she said.

Bebe Ahmed, founder of “Save the Beach,” travels island to island in the Maldives with the mission of teaching kids about restoring and protecting coral. He told ABC News that his dream is to inspire young Maldivians to want to start their own projects to restore coral reefs.

What’s next in the fight?

Technology, like 3D-printed coral structures or a floating city, may have to be part of the solution.

The Maldives is home to the Modular Artificial Reef Structure, or MARS, a coral-forming project on the resort island of Summer Island. to the coral forming project, MARS. The project has 3D-printed bases that are placed in the water with transplant corals attached to them. The hope is that the system is designed with the specific needs of the coral farm in mind, providing a permanent structure for coral to grow.

In the late ’90s, the Maldives began construction on the island of Hulhumale through the process of land reclamation. Hulhumale is 6.5 feet above sea level, more than double the height of Male, the current capital of the Maldives. It is possible this island may be a future site for relocation of Maldivians suffering from sea level rise. Maldivians call their manmade island the City of Hope.

The future of the Maldives could also come in the form of a floating city. In 2022, just a few miles from the dense, capital city of Male, construction and assembly will begin on the world’s first true floating city. The unique solution will not have to worry about sea level rise, because it will always be on top of the sea.

The project is being developed and led by Dutch Docklands in the Netherlands. Lead architect Koen Olthuis gave ABC News an inside look at how the floating city is designed and what it should eventually look like.

The floating city has a unique pattern, modeled after the brain, both human and coral.

The entire city will shift up and down on a pile drilled into the sea floor. It will also take advantage of its environment to better provide for those living on the floating city.

“By being on the water we want to take advantage of the water — and using the coolness of the water — so these are water-cooled cities, for which you take cool water outside the atoll and pump water through the route and activate the air conditioning systems,” Olthius said.

In race to win, UK Conservatives accused of ignoring crises