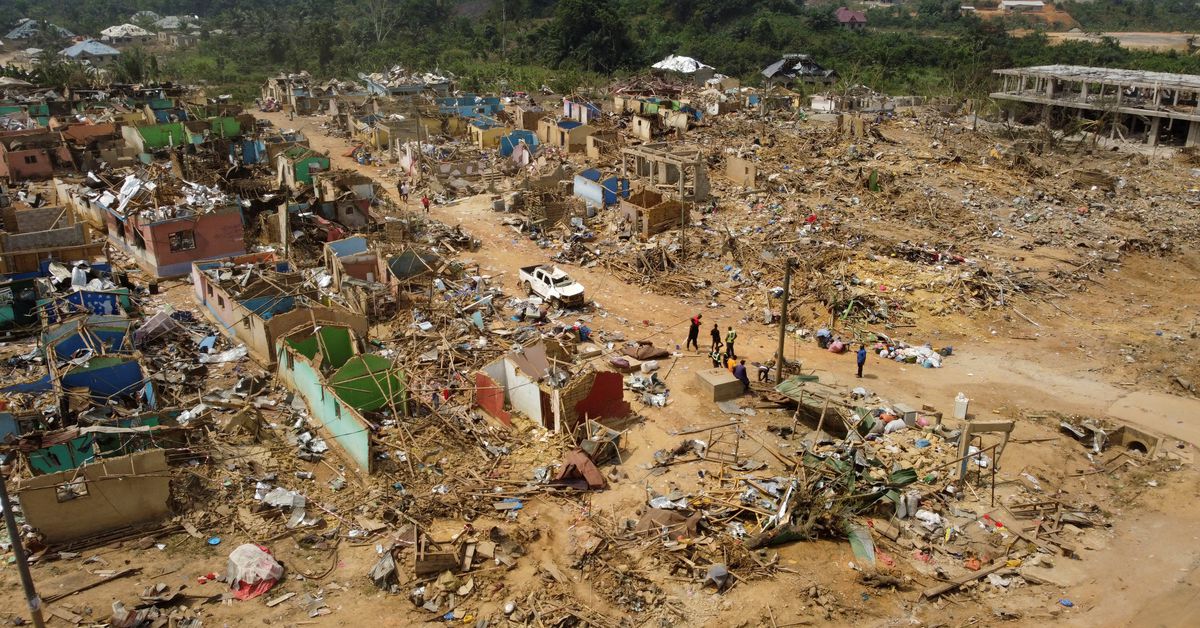 APIATE, Ghana, Jan 21 (Reuters) – At least 13 people were killed and scores injured when a truck carrying explosives to a gold mine in western Ghana detonated, flattening a rural community, the police said on Friday.

Smouldering timber and torn-up sheet metal marked where hundreds of houses had stood in Apiate, a settlement about 200 km (130 miles) west of the capital Accra. Thursday’s blast left a crater roughly 20 meters (66 ft) wide. Doors and roofs were blown off other buildings, a Reuters reporter at the scene said.

Rescue workers combed the site while excavators dug through the larger piles of dirt and debris.

“We’ve seen damage to lives and property here that is just indescribable,” said Daniel Adu-Gyamfi, a student from a nearby mining college who came to volunteer with the response team.

“Yesterday … you could see human remains all over the place.”

About 180 people were injured by the explosion, police said.

In a video apparently filmed by a bystander in Apiate, people can be seen walking towards a fire on the side of the road when a powerful explosion ripped through the settlement.

It was not immediately clear what caused the accident. Police said a motorcycle crashed into the truck, then caught fire, and a government statement suggested a roadside power transformer could have played a role.

The truck was owned by a Spanish company called Maxam that was transporting explosives to the Chirano gold mine, run by Toronto-based Kinross Gold Corporation (K.TO), police said. read more

The ministry of lands and natural resources said in a statement that Maxam would be suspended from manufacturing, transporting or supplying explosives for mining operations pending the outcome of investigations into the incident.

The ministry also ordered the suspension of Ghana’s chief inspector of mines, who is responsible for supervising explosives use in the sector.

Debris of houses and other buildings that were destroyed when a vehicle carrying mining explosives detonated along a road in Apiate, Ghana, January 21, 2022. Picture taken with a drone. REUTERS/Cooper Inveen

Maxam, which has 140 subsidiaries operating in more than 50 countries, has not responded to requests for comment.

Kinross said it planned to provide support to the response efforts and relief items to those affected.

Kwesi Ofori, director of public affairs for the Ghana Police Service, told reporters earlier on Friday that the transport of the explosives had followed proper procedure, and the truck had a police escort.

Police are treating the site as a crime scene while they investigate, he said, without providing details.

The death toll could have been much worse.

There was a pause between the collision and the explosion, which gave the driver time to tell the community that they were in danger, said police spokesperson Ofori.

Teachers in a nearby school were among the first informed, and evacuated the children.

“(The driver) also announced to most community members to move out, including the moto rider,” Ofori said.

The government earlier on Friday said the death toll was 17, mistakenly counting four people who are alive but in critical condition, Ofori said.

In a visit to Apiate, near the towns of Bawdie and Bogoso, Vice President Mahamudu Bawumia applauded the rescue efforts and said the government was working to set up temporary housing for those who lost their homes.

“We will learn lessons and those are going to be much later on. For now we are very concerned about how to complete this rescue effort,” he said.