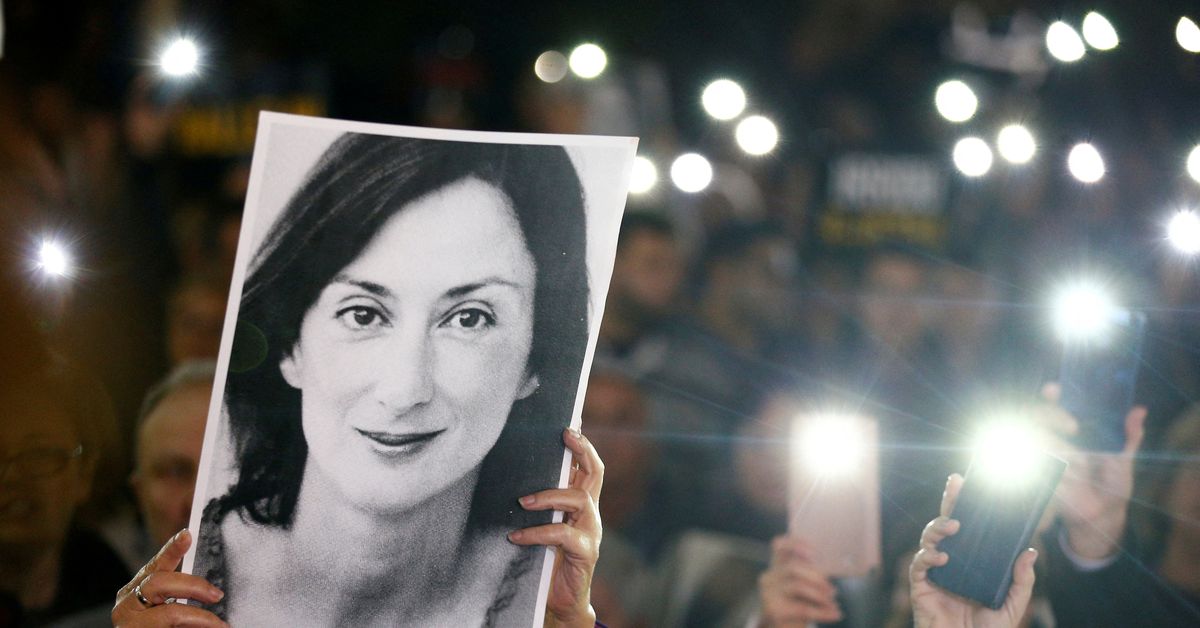 VALLETTA, July 5 (Reuters) – The man accused of detonating a car bomb that killed a prominent Maltese journalist has confessed to the crime in an interview with a Reuters reporter and says he will soon implicate others in plotting to assassinate her.

Speaking from jail in his first comment on the case, George Degiorgio said if he had known more about Daphne Caruana Galizia – the journalist he and two others are accused of killing in 2017 – then he would have asked for more money to carry out the hit.

“If I knew, I would have gone for 10 million. Not 150,000,” he said, referring to the sum in euros that he said he was paid for killing the journalist.

“For me it was just business. Yeah. Business as usual!” he told a Reuters reporter. He later added, “Of course I feel sorry.”

The interview with Degiorgio was conducted during research for a podcast into the Caruana Galizia case, entitled “Who Killed Daphne?“

His admission came after several attempts by Degiorgio’s lawyers since 2021 to secure a pardon in return for testimony about Degiorgio’s role in Caruana Galizia’s murder and other alleged crimes involving prominent figures on the island.

On June 22, Malta’s Appeal Court rejected remaining legal challenges by Degiorgio to the murder charges against him and his brother Alfred, who is co-accused. The judgement clears the way for trial to go ahead.

The car-bomb assassination of the investigative journalist and blogger caused shock across Europe. Maltese authorities charged Degiorgio and two other men – his brother Alfred and an associate, Vince Muscat – with murdering Caruana Galizia in October 2017 at the behest of a top island businessman.

Degiorgio told Reuters he would plead guilty ahead of any jury trial. “I’m going to speak to the magistrate,” he said. He indicated he would provide testimony to implicate others in the murder and in a previous unrealised plot to kill the journalist. His motive, he said, was to seek a sentence reduction for himself and Alfred and to ensure that “we’re not going down alone!”

Until now, both of the Degiorgio brothers had denied involvement in the killing. Muscat pleaded guilty to the murder charges in 2020 and was sentenced to a reduced term of 15 years in jail in return for testifying about this case and some other crimes.

One of the island’s richest businessmen, Yorgen Fenech, was also charged in November 2019 with commissioning Degiorgio and his two accomplices to carry out the hit. Fenech has denied the charge but has not yet presented his defence. In a statement, his lawyer, Gianluca Caruana Curran, said Fenech planned to prove in court “he at no point wanted, actively searched for or sponsored” Caruana Galizia’s assassination.

“While strongly protesting his innocence, Mr Fenech maintains that with the evidence available, independent and serious investigations are capable of leading to the arrest and arraignment of the true perpetrators behind the assassination.”

Fenech was identified as the mastermind by an alleged middleman, taxi driver Melvin Theuma, who escaped prosecution for his role in the case in return for testifying. Theuma said he arranged the murder with the Degiorgio brothers on Fenech’s behalf. He testified that he never told the Degiorgio gang Fenech’s identity.

In the interview, Degiorgio said he was willing to testify that a top Maltese political figure had tried to arrange a hit on Caruana Galizia in a separate plot two years earlier. Degiorgio also said he would offer to testify about the involvement of two senior former ministers in an armed robbery.

Reuters is not at this stage publishing further details of those allegations or naming the individuals accused by Degiorgio, all of whom deny any involvement in any crime.

Malta Police Force and the prosecutors handling the murder case did not respond to requests for an official comment on Degiorgio’s remarks.

In a further statement to Reuters via their lawyer, George and Alfred Degiorgio said they are seeking a judgment “in line with that already handed down to Vincent Muscat. We are willing to divulge everything we know about other murders, bombs and crimes provided we receive a pardon. We emphasize that the families of other victims should be served justice too.”

Caruana Galizia was killed after she levelled a series of corruption allegations against prominent people, including ministers in the island’s Labour Party government. Her murder raised suspicions that some of the people she was investigating could be involved in plotting her death.

Fenech, who stands accused of ordering up the successful 2017 hit, was first identified in connection with Caruana Galizia in November 2018 articles by Reuters and the Times of Malta. The report named him as the owner of a company known as 17 Black that Caruana Galizia alleged, without citing evidence, was being used to bribe politicians. Fenech was also the head of a controversial power station project in Malta.

According to prosecution evidence presented in court in multiple preliminary hearings since 2018, George Degiorgio and his gang had tracked the journalist throughout the summer of 2017. In the early hours of October 16, 2017, prosecutors allege, the gang planted a bomb under a seat in her car.

That afternoon, Degiorgio was allegedly on a yacht in the island’s Grand Harbour when his brother Alfred, who was watching the house, called to say Caruana Galizia had entered her car and driven off. Degiorgio then sent a text message from the yacht to a mobile device that detonated the bomb, prosecutors told the court.

After the car exploded, Caruana Galizia’s son Matthew heard the blast, ran out from the family home and discovered his mother’s body. He has been campaigning for justice for his mother ever since. Asked about Degiorgio’s comments, he told Reuters: “George Degiorgio’s own words show he is a stone-cold killer undeserving of any reprieve.”

Arrested two months after the killing, George Degiorgio said nothing to police, declining even to give his name during interrogation. Until the Reuters interview, he had remained silent, and his lawyers have spent four years denying he was involved in the murder. He has also filed a series of legal challenges contesting the evidence against him.

But he is now seeking a deal with the prosecution, ahead of a trial, in return for admitting the charges and providing the new information.

Alfred Degiorgio, like his brother, has pleaded not guilty to murder charges but has not presented his case. He too has made several applications to be pardoned of the charges in return for testifying about what he knows.

George Degiorgio said that before taking the hit job, he hadn’t known much about Caruana Galizia or her family, including the fact that they were ordinary people, not criminals. “That’s it. Of course! I never met her in her life,” he said.

The Degiorgio brothers have made several bids since March 2021 for an official pardon for their crimes. The latest, filed on April 4 by their lawyer, William Cuschieri, said, without giving names or specifics, that the Degiorgios could testify to “Crimes of attempted violent robbery and attempted voluntary homicide in which one of the authors was a Minister and another author who is a Minister.” The request was rejected by Malta’s government on April 24, citing the national interest and the administration of justice, according to an official statement.

Malta’s prime minister, Robert Abela, previously condemned attempts by the Degiorgios to win a pardon, calling them “criminals” seeking to buy their freedom. Cuschieri, the lawyer for the Degiorgios, responded by saying the prime minister was breaching their rights to a fair trial and, without providing details, said the brothers had “direct information” about a minister’s involvement in crime.

FURTHER DETAILS OF THE PODCAST

“Who Killed Daphne?,” written and hosted by Reuters reporter Stephen Grey, is a six-part podcast that follows the struggle for justice by Daphne Caruana Galizia’s son Matthew after her death – and the project to continue Daphne’s work by a team of journalists. Produced by global podcast studio Wondery, it airs on Amazon Music, Apple Podcasts, Spotify and all other podcast platforms from July 11, or is available now on Wondery+.

((reporting by Stephen Grey; additional reporting by Jacob Borg of the Times of Malta; edited by Janet McBride))