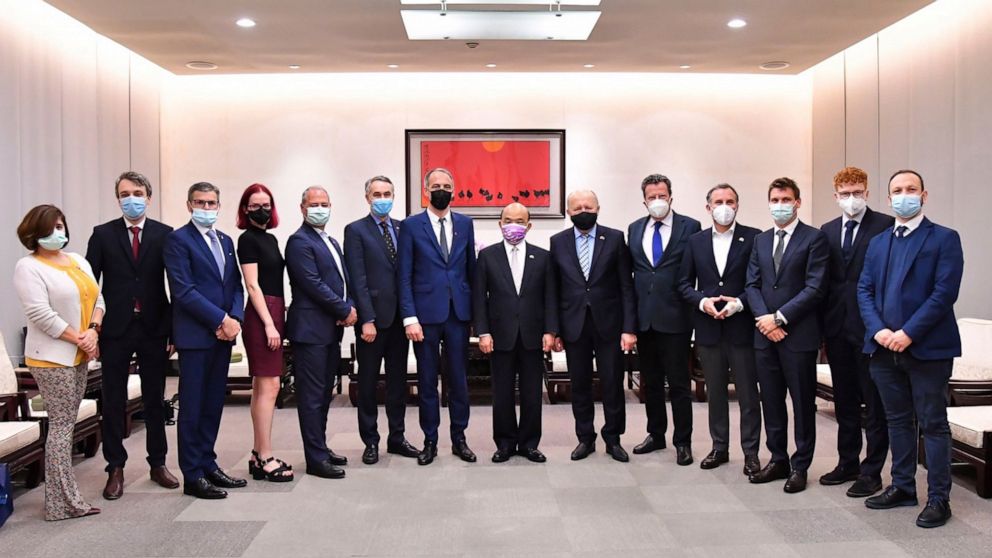 The head of a European Parliament delegation on its first official visit to Taiwan says that it’s “high time” for the European Union to step up its cooperation with the self-ruled island, which is also claimed by China

TAIPEI, Taiwan — The head of a European Parliament delegation on its first official visit to Taiwan said Thursday that it’s “high time” for the European Union to step up its cooperation with the self-ruled island, which is also claimed by China.

Thirteen lawmakers from the parliament’s committee on foreign interference in democratic processes met with Taiwan President Tsai Ing-wen on the second day of a three-day visit.

“We came here with a very simple, very clear message. You are not alone,” said Raphael Glucksmann, the French chair of the European Parliament committee. “Europe is standing with you, by you, in the defense of freedom and the defense of rule of law and human dignity.”

Tsai kept her welcome remarks short, calling the visit “highly significant” and saying Taiwan was willing to share its experience in combating disinformation and that it wants to build a “democratic alliance” against disinformation.

Last month, the European Parliament passed a resolution calling for the body to “intensify EU-Taiwan political relations.” The non-binding resolution also called for changing the name of the representative office in Taiwan to the European Union Office in Taiwan, and to establish a bilateral investment agreement with the island.

The visit comes amid growing support for the democratic island, which China claims as part of its territory to be annexed by force if necessary, and rising negative perceptions toward Beijing in Western countries.

China has sent an increasing amount of fighter jets toward the island in a prolonged campaign of military harassment since at least last year, when Taiwan began publicly releasing the data.