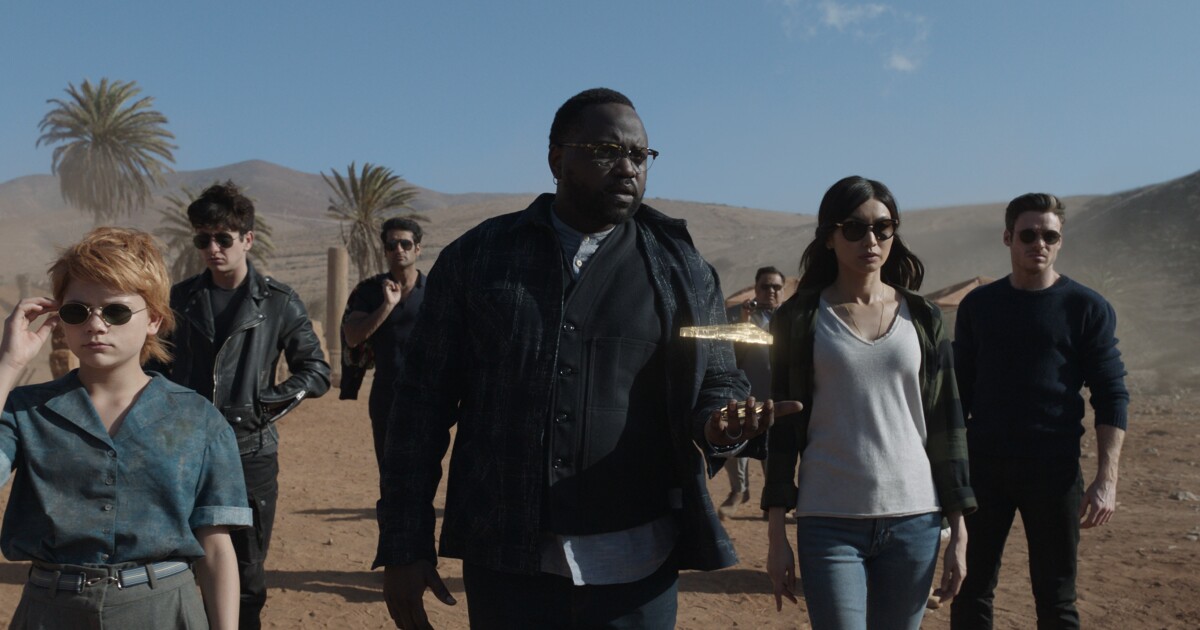 “Eternals,” which features a cast of globally recognized Hollywood stars including Angelina Jolie and Salma Hayek, has reportedly been pulled from cinemas in Saudi Arabia, Qatar and Kuwait over its inclusion of the Marvel Cinematic Universe’s first gay superhero.

The new film, which features tech genius Phastos (Brian Tyree Henry) in the MCU’s first same-sex kiss, has quietly been banned ahead of its planned Nov. 11 release across the conservative Gulf nations, according to Variety and the Hollywood Reporter.

The star-studded superhero flick, directed by Oscar winner Chloé Zhao, was reportedly met with a series of edit requests by the local censors and Disney was not willing to make those edits, THR reported.

Representatives for Disney did not immediately respond Thursday to The Times’ request for comment.

Zhao, who made history with her Oscar wins for “Nomadland” earlier this year, has said that she asked Marvel not to alter any scenes to appease censors.

“I don’t know all the details, but I do believe discussions were had and there’s a big desire from Marvel and myself— we talked about this — to not change the cut of the movie,” she told IndieWire. “Fingers crossed.”

Saudi Arabia, which reopened its movie theaters in 2018 after a 35-year ban, has quickly become the Middle East’s largest theatrical market, but still frequently subjects films to censorship. Homosexuality is still illegal across much of the region and is punishable by death in Saudi Arabia and Qatar. Many films are either pulled or censored because of LGBTQ references.

The alleged ban comes just ahead of the kingdom’s plans to launch the glitzy Red Sea International Film Festival next month — an event that promises exhibitors that no editorial cuts or changes to any film will be made by organizers without written approval from the rights holders.

Listings for “Eternals,” which had been publicized before, are unavailable on websites in both countries, as well as in Kuwait. Regional booking website elCinema.com, which posts theater listings by country and what’s coming soon, also doesn’t list “Eternals” in several Gulf countries. The film is still “coming soon” in Egypt and Lebanon. It is also still expected to be released as planned in the United Arab Emirates, the trade publications said.

A regional cinema chain told THR that “Eternals” had been “banned” but was not told why.

In Singapore, “Eternals” became the first MCU film to be given an M18 certificate, restricting audiences under 18 years of age from viewing it. A spokesman for Singapore’s Infocomm Media Development Authority told the Guardian that it was a result of “homosexual references.”

Zhao’s film likely won’t be released in China either. The Beijing-born director has faced a nationalist backlash in mainland China after discussing her upbringing there. China, the world’s largest film market, also skipped releasing Marvel’s “Shang-Chi and the Legend of the Ten Rings” earlier this year, despite it starring the studio’s first Asian superhero, because of “insults” to China made by its star, Simu Liu.

“Eternals” actor Sleiman told Variety at the Los Angeles premiere that he thought his scene with Henry was “life saving.”

“Can you imagine how many lives this is going to be saving — kids, young queer folk, who are being bullied, committing suicide, and not seeing themselves being represented? And now they get to see this — it’s above and beyond,” he said.