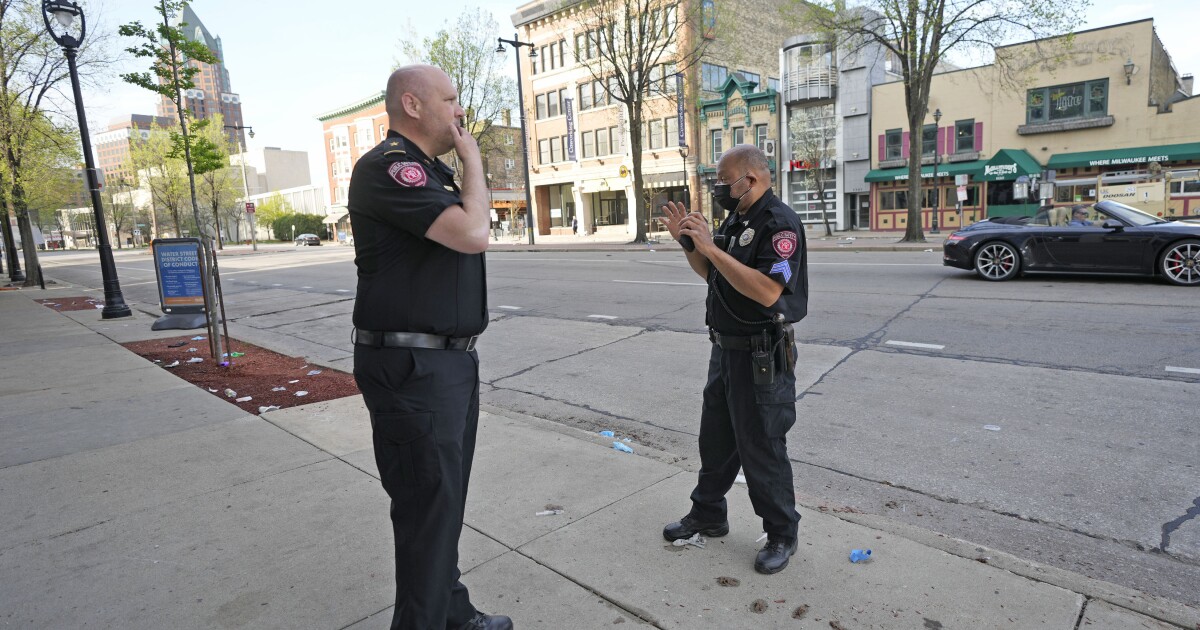 Milwaukee officials on Saturday enacted a curfew for young people and added extra patrols after 21 people were injured in three separate downtown shootings near an entertainment district where thousands gathered for an NBA playoff game.

Three people were injured in the first shooting, one in the second, and 17 in what police described as an exchange of gunfire between two groups of people, all just a few blocks from the arena where the Milwaukee Bucks lost to the Boston Celtics in Game 6 of the NBA’s Eastern Conference semifinals. All of the victims are expected to survive.

“What makes people think they can just have a shootout on a public street or in an entertainment district, whether police are there or not?” Assistant Police Chief Nicole Waldner asked at a noon news conference.

Mayor Cavalier Johnson said the city imposed a curfew for the downtown area requiring everyone age 20 or younger to be off the street by 11 p.m. for Saturday and Sunday. Extra police patrols also are planned.

The mayor did not cite any plans to prohibit downtown watch parties for Sunday afternoon’s Game 7. Though the game is in Boston, thousands of fans often congregate downtown to watch on big-screen TVs in the Deer District — an entertainment area with numerous bars and restaurants where large crowds often assemble to watch major sporting events.

Waldner said three people were injured in the first shooting at 9:10 p.m. adjacent to the Deer District. They included a 16-year-old girl. One man is in custody.

Bill Reinemann, a parking attendant at a lot adjacent to Deer District, said he heard gunshots, then saw scores of people running away.

“It sounded like six to eight gunshots,” he said “It was close.”

Seventeen more people were injured in a shooting at 11:09 p.m. Five of the injured were armed and were among the 10 people taken into custody, Waldner said. Police haven’t yet determined what set off the shooting.

“There were a couple groups exchanging gunfire despite the incredible amount of police presence that was downtown,” Waldner said. “District 1 officers reported bullets whizzing past their heads.”

Jake O’Kane, 25, of Appleton, Wis., attended the playoff game with his girlfriend. Afterward, they saw the commotion from the first shooting, then went a few blocks away and spent a couple hours at bars before deciding to take a Lyft ride to a restaurant.

O’Kane said they were outside waiting for their ride, “then all of a sudden you hear the ‘pop, pop, pop’ behind you.”

O’Kane said he heard about 20 shots before he was able to capture 22 more on video. He estimated the gunfire was a few hundred yards away from his group.

When the driver pulled up less than two minutes later, “I said, bro — drive!” O’Kane said.

The Bucks said in a statement Friday night that no shootings occurred inside the Deer District, where an estimated 11,000 fans who couldn’t get inside the arena gathered to watch the game.

Milwaukee was among several U.S. cities that saw record numbers of killings in 2021, most of them involving guns. The list also included Philadelphia, Indianapolis and others.

Experts believe stress and pressures caused by the COVID-19 pandemic contributed to the violence. Johnson blamed easy access to guns.

“A central part of the problem is the fact that individuals easily get their hands on guns,” Johnson said. “This is not strictly a Milwaukee problem. Across the country we’ve seen a rise in shootings, both fatal and non-fatal.”

Of Milwaukee’s 193 killings in 2021, 180 were by firearms. An additional 873 people were wounded in shootings, according to police data.

O’Kane said he worries about the direction Milwaukee is going.

“Are we going to go to another game again, if we win? Yeah, I’m still going to end up going to Bucks games. But are we going to be partying out afterward outside? Hell no, not a chance.”