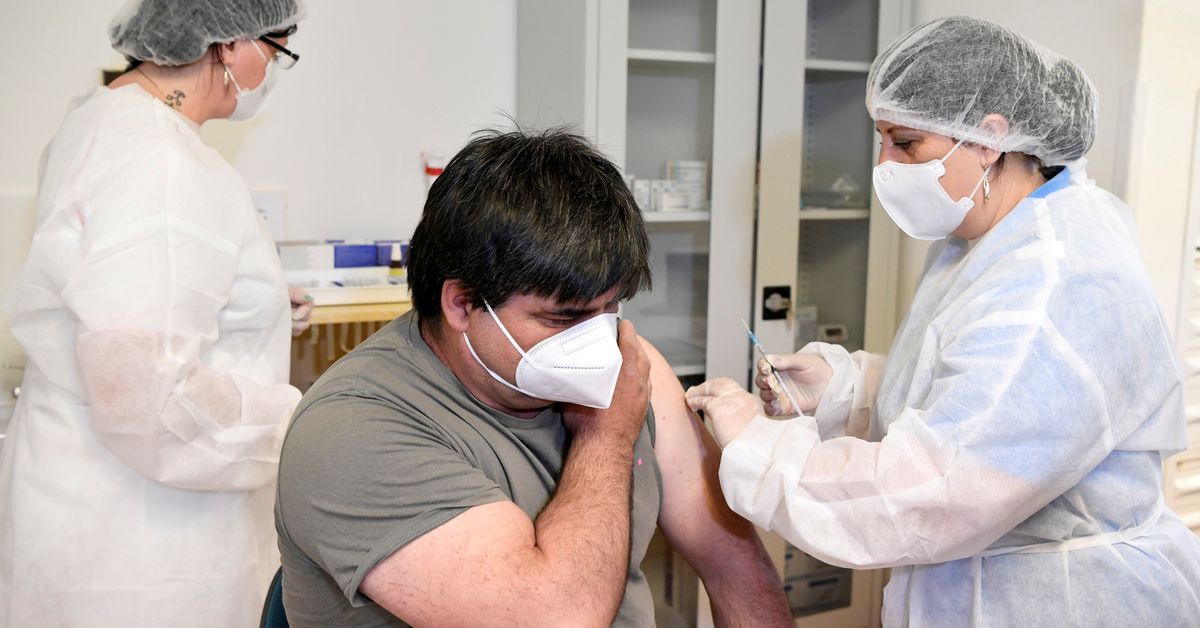 A man receives a dose of the Sputnik V vaccine against the coronavirus disease (COVID-19) at a vaccination centre in Zilina, Slovakia June 7, 2021. REUTERS/Radovan Stoklasa

BUDAPEST, Nov 4 (Reuters) – Coronavirus infections are hitting record levels in many countries across Europe as winter takes hold, prompting a call for action from the World Health Organization which described the new wave as a “grave concern”.

Soaring numbers of cases, especially in Eastern Europe, have prompted debate on whether to reintroduce curbs on movement before the Christmas holiday season and on how to persuade more people to get vaccinated.

That conversation comes as some countries in Asia, with the notable exception of China, reopen their tourism sectors to the rest of the world. read more

“The current pace of transmission across the 53 countries of the European Region is of grave concern,” regional WHO head Hans Kluge said, adding that the spread was exacerbated by the more transmissible Delta variant.

The virus spreads faster in the winter months when people gather indoors.

Kluge warned earlier that if Europe followed its current trajectory, there could be 500,000 COVID-related deaths in the region by February.

“We must change our tactics, from reacting to surges of COVID-19, to preventing them from happening in the first place,” he said. read more

The region saw a 6% increase in new cases last week, with nearly 1.8 million new cases, compared to the week before. The number of deaths rose 12% in the same period.

Germany, Europe’s biggest economy, reported 33,949 new infections, the highest daily increase since the start of the pandemic last year. Cases in Russia and Ukraine are soaring.

Austria’s daily new coronavirus infections surged towards a record set a year ago, making a lockdown for the unvaccinated ever more likely. read more

COVID-19 prevalence in England rose to its highest level on record in October, Imperial College London said, led by a high numbers of cases in children and a surge in the southwest.

CHINA ON ALERT AHEAD OF OLYMPICS

China is also on high alert at ports of entry to reduce the risk of COVID-19 cases entering from abroad, and has stepped up restrictions amid a growing outbreak less than 100 days before the Beijing Winter Olympics.

Authorities have also tightened curbs in the capital ahead of a major gathering of the top members of the Communist Party next week.

Since mid-October, over 700 locally transmitted cases with confirmed symptoms have been reported in China. While the number is tiny compared with other countries, it has led to a growing wave of restrictions under Beijing’s zero-tolerance policy.

In Central Europe, Hungary has trimmed its 2021 GDP growth projection to 6.8% from 7.0-7.5% due to a rise in inflation, energy prices, and the risks stemming from COVID-19, the finance minister said, flagging the possibility of some new restrictions in a country where there are currently hardly any curbs in place.

Slovakia’s Finance Ministry cut its forecasts for 2021 and 2022 growth in September, saying a new wave of COVID-19 cases will hit consumer demand and the labour market at the end of the year although the impact will not be as strong as earlier in the pandemic. Poland’s central bank left its projections unchanged.

The Hungarian government has urged people to take up vaccines and last week announced mandatory vaccinations at state institutions, also empowering private companies to make jabs mandatory for employees if they believe that is necessary.

Romania – where hospitals cannot cope with a surge in COVID-19 patients – the Czech Republic, Slovakia and Poland have all tightened rules on mask wearing and introduced measures to curb infections.

The Czech Republic has introduced a requirement for restaurant customers to show proof of vaccination or a test. It also has tough mask regulations and some children are again being tested in schools in areas where cases are higher.

In Poland, mask wearing is mandatory in enclosed public spaces while cinemas, theatres and hotels have a 75% capacity limit. The Hungarian government has not replied to Reuters questions on potential measures.

Reporting by Krisztina Than in Budapest and Nicolaj Skydsgaard in Copenhagen
Additional reporting by Jason Hovet, Alan Charlish and bureaux worldwide
Writing by Nick Macfie
Editing by Frances Kerry