COP26 report card: How the world’s largest emitters are faring on climate goals 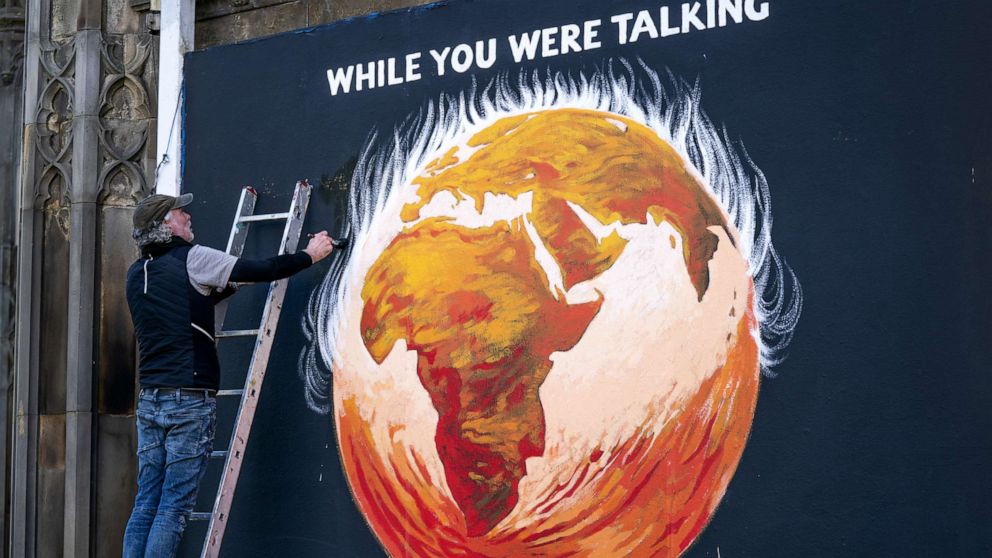 Climate change is finally at the forefront of global agendas after a year-long delay and myriad promises made since the last major summit.

But as countries continue to review — and make more ambitious — the Nationally Determined Contributions submitted in Paris, are they actually doing enough to reach their goals?

“No major emitter is doing enough,” David Sandalow, a senior research scholar at Columbia University’s Center on Global Energy Policy, told ABC News. “Collectively, we are not on track to avoiding dangerous climate change or meeting the Paris Agreement.”

COP26 is the “most important conference in the history of the climate crisis,” Jim Harmon, chairman of the World Resources Institute, told ABC News.

Here’s how some of the world’s largest greenhouse gases emitters are faring:

China must cut coal use

China is responsible for about 26% of the world’s greenhouse gas emissions, more than all other developed countries combined, according to the Center for Climate and Energy Solutions.

In 2020, Chinese President Xi Jinping declared a new aim for the country to have CO2 emissions peak before 2030 and achieve net-zero carbon emissions before 2060 — the type of “bold action” needed for a significant reduction, Harmon said. If implemented, China could generate savings of $530 billion in fuel, operation and maintenance costs over 30 years, Harmon added.

But despite the ambitious pledge, China has continued to build coal plants. It’s the country’s main source of energy. Emissions increase and air quality declines.

In 2020, 75% of the world’s coal factories were located in China, Maria Mendiluce, CEO of We Mean Business Coalition, a group of seven nonprofits focused on business and policy actions to cut emissions, told ABC News. China built three times more coal power plants in 2020 than the rest of the world combined, according to a report published in August by the Centre for Research on Energy and Clean Air. The country plans to build even more, with 43 coal-fired power plants and 18 blast furnaces on the horizon.

“There’s an inconsistency between the very ambitious goal of net zero emissions by 2060 and continuing to build coal plants,” Sandalow said.

The country’s leaders seem aware how problematic using coal is. In September, Xi pledged to stop building coal-powered plants abroad, and in April he said China would begin to cut coal use in 2026.

The Climate Action Tracker, a scientific analysis of government measures compared with pledges made in Paris, ranks China’s overall efforts as “highly insufficient.”

It’s not impossible for China to meet its goal of carbon neutrality by 2060, Sandalow said. China has led the world in the deployment of wind and solar power, and more than half of the electric vehicles in the world sold in 2020 were in China in 2020, he said, but it’s still not enough to offset that China is consuming more coal than the rest of the world combined.

“Today, 2060’s a long ways away,” he said. “But it’s certainly going in the wrong direction to be building those coal plants.”

While the U.S. may account for just 13% of emissions — roughly half of China’s total — the country still may be responsible for more total damage, experts told ABC News.

Cumulative emissions from the U.S. over the past century are likely twice that of China’s, Sandalow said. Some experts argue cumulative emissions far outweigh annual emissions because the major greenhouse gas, carbon dioxide, stays in the atmosphere for hundreds of years. In addition, the emissions per capita in China are less than in the U.S.

President Joe Biden campaigned in 2020 with climate change at the forefront of his agenda, after little was done during the Trump administration. Biden has set a target to reduce emissions by at least 50% by 2030 and to hit net-zero emissions by 2050, which Sandalow described as the “most ambitious climate agenda of any administration in U.S. history.”

The U.S., Japan and Australia have formed an initiative called the Blue Dot Network to provide assessments and new standards to integrate climate and sustainability factors into major projects.

“That will set standards not only for climate, but also for equity, for human rights, for transparency — so the whole range of things that we look at from a sustainability perspective,” he added.

Beyond everything already been said and done, Congress is going to have to “step up,” Kline said, adding that the infrastructure bill, if passed, contains the money and programs necessary to “make a real difference in helping the U.S. meet its commitments.”

The proposed “Build Back Better” plan would include at least $500 billion to tackle climate change — a range of clean energy tax credits, support for conservation and a methane emissions fee or a tax on carbon dioxide emissions from fossil fuels.

Biden also has the authority, under existing statutes, to limit emissions from power plants and automobiles, two of the biggest sources in the U.S., Sandalow said. Appointing John Kerry as the first special presidential envoy for climate also “sent a strong signal to the world” about the Biden administration’s priorities.

“There’s a reasonable prospect that the president’s goals can be met, but it would help a lot if Congress enacts the ambitious legislation,” he added.

Still, the overall rating for the U.S. on the Climate Action Tracker is “insufficient” because its “emissions reduction target and provision of climate finance are not enough to make up its fair share.”

India needs a clear path toward systemic climate action, according to the experts.

The country accounts of 6% of greenhouse gas emissions, and the impact of the pandemic may have weakened the country’s willingness to implement necessary changes, according to Climate Action Tracker, which rates India’s overall actions as “highly insufficient.”

In response to the economic crisis, India unveiled one of the largest stimulus packages in the world — equal to about 11% of the country’s 2019 GDP — but it included support that likely will lead to using more fossil fuels and using land unsustainably, according to the tracker.

India has not submitted pledges ahead of COP26, but, Mendiluce said, there are rumors that in Glasgow the nation’s leaders will announce an aim to reduce emissions intensity — although it’s unclear by how much, .

But the country continues to build coal plants, Sandalow said. It’s also approved “fresh loans” for a number of thermal power powers, “undermining a green recovery,” according to the tracker.

The host country for COP26 has a “strong story” in terms of its progress on climate goals, but continuing that rate of reduction is going to prove difficult, Lord Gregory Barker, former U.K. minister of state for energy and climate change and executive chairman of green energy and metals company En+ Group, told ABC News.

The U.K., the first OECD country to adopt a net-zero goal and make it legally binding, has reduced its carbon emissions by more than half since 1990, according to an analysis released in March by Carbon Brief, a website specializing in the science and policy of climate change.

The country that popularized the use of coal during the industrial revolution achieved the drastic reduction mostly by switching from to gas to generate electric power, but the milestone also was aided by an 11% decrease in greenhouse gases because of the pandemic.

Considering that the U.K. has made little progress in transforming its transportation sector, difficulties remain in zeroing out the remaining emissions, Barker said.

“While we can congratulate the U.K. on progress so far, there is absolutely no room for complacency because the next 50% is going to be a lot harder than the first 50%,” he added.

Barker envisions “dramatic innovation” in the decade ahead, adding that the country will need to “double down” on research and development, as the number of solutions in each sector will need to be scaled up.

The U.K. accounts for about 1% of global annual emissions. The Climate Action Tracker rates its actions as “almost sufficient” but there “remains a large gap” between ambitions and actions.

Australia represents only 1% of the world’s greenhouse gas emissions, but it remains the largest exporter of coal, by far — a record for which Prime Minister Scott Morrison has been criticized.

Climate change has been “controversial” in Australia for many years, and the government doesn’t consider it a top priority, Sandalow added.

In late September, reports that Morrison remained undecided on whether to attend COP26 drew global disdain, but he announced on Oct. 25 he would commit to a target of net-zero carbon emissions by 2050, leaving unchanged the nation’s goal for 2030.

The country is not even on track to meet its current 2030 target, according to the Climate Action Tracker, which rates Australia’s actions as “highly insufficient.”

The plan the Australian government has submitted is “very weak,” with targets much less ambitious than other industrialized countries, Sandalow said. It relies solely on technology and “doesn’t have the strong policy signals that will be needed to actually reduce emissions.”

“The government appears intent on replacing fossil fuels with fossil fuels,” the tracker alleged, citing a 2021-22 budget that allocates large sums to gas infrastructure projects and a gas-fired power station with no new support for renewables or electric vehicles. Australia also plans to replace a coal plant with a federally funded gas plant in New South Wales, while continuing to support carbon capture and storage, and fossil fuel-derived hydrogen.

It won’t be one country’s actions that save the planet, experts agreed. It simply can’t be.

Working collectively has come to be embraced by “more and more people” since the Paris Agreement, Kline said.

It’ll be incumbent on G-20 countries, which are responsible for the vast majority of emissions, to do the most work to limit continued warming, Harmon said, but the U.S. may put pressure on countries with weaker pledges — Mexico, Brazil and Australia among them.

Kline said the key to achieving commitments by governments will require a shift in global private investment.

“So,” he added, “you’ve got the private investors, you’ve got multinational government agencies and these international professional organizations all kind of coming together, and developing some really important tools and processes that help get beyond the aspirational statements.”

Barker said the “big six” industrial sectors — energy, transportation, agriculture, forest and land use, industry and buildings and cities — will need to implement decarbonization on their own, regardless of what governments target.

“There’s a recognition now,” he added, “that the private sector really has a critical role to play, to actually deliver on the pledges that the governments are making.”