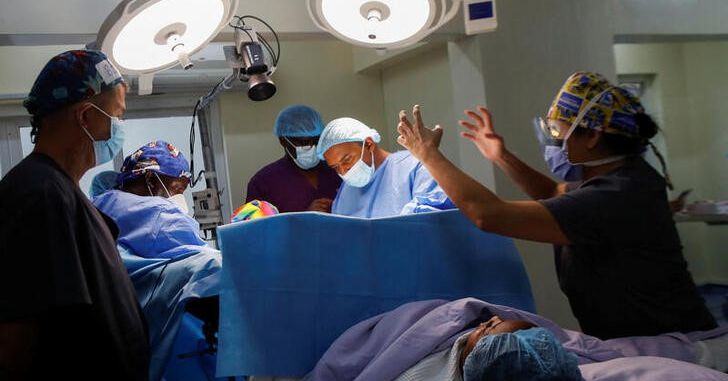 NAIROBI, Nov 25 (Reuters) – Imagine having no sensation in a body part for most of your life and then being able to feel it at last.

That was the transformation being sought by about 60 Kenyan women who had undergone female genital mutilation, or FGM, during childhood and came forward for reconstructive surgery of the clitoris during a recent humanitarian operation in Nairobi.

“I basically feel like I’m incomplete,” said one patient, a 39-year-old police officer, who requested anonymity due to the intimate subject matter.

“The things that other girls enjoy I don’t. It has really put my esteem so down. So given an opportunity, I just decided to grab it so that at least I can maybe feel complete and maybe get what others are getting,” she said.

Practiced in 30 countries in Africa, the Middle East and Asia, FGM involves the partial or total removal of the external, visible part of the clitoris or other injuries to female genitalia, usually inflicted during childhood.

FGM is illegal in Kenya but 21 percent of girls and women aged 15 to 49 have undergone some form of it, according to the United Nations Population Fund.

Rooted in social conventions and cultural beliefs about femininity and sexuality, FGM is profoundly harmful in the short and long term. Some girls die, all suffer lifelong consequences such as urinary and vaginal infections, sexual problems, complications giving birth, and psychological pain.

Reconstructive surgery was being offered during a week-long visit to Nairobi this month by U.S. surgeon Marci Bowers, organised by the NGO Clitoraid. Bowers had operated on hundreds of Kenyan women during two previous visits, in 2017 and 2019.

“It’s life-changing, and this is a term we hear over and over again. They say they feel like they have their sense of womanhood back again,” said Bowers, a pioneer in this field.

The clitoris is about 11 centimetres in length and much of it is internal. Usually, the part that is cut in FGM is the tip. Bowers said the surgery involves bringing part of the clitoral body to the surface so that women can feel it.

“Imagine if there was a surgery to give back sight to a blind man or a sense of taste to someone who never tasted an apple before,” she said. “That’s how big it is.”

Bowers has trained Kenyan doctors and nurses during her visits, and the University of Nairobi is setting up a programme to train medics in surgery to help FGM survivors, raising hopes that such interventions could be more available in future.

Joycelyn Mwangi, a Kenyan activist who works on community programmes aimed at preventing FGM through education, said that while surgery could help individual women, it was only a complement to wider efforts to combat the practice.

Stopping FGM required a change of behaviour “at the cultural level, at the community level”, she said.

The patient at the Nairobi clinic said that if she had her way, no girl anywhere would endure FGM “because it really puts the girl down”.

“I was nine years old. I didn’t know about anything,” she said, recalling the day when she was taken for the procedure in her home village. She bled for days afterwards and feared she would die.

“I was just told that I will be taken for something to make me a complete woman, which is actually … the opposite,” said the woman, who now lives in Nairobi.

“This really affected my life and that is why I opted to get the reconstruction surgery done.”