Chinese Military Drills Aim to Awe, Both Abroad and at Home 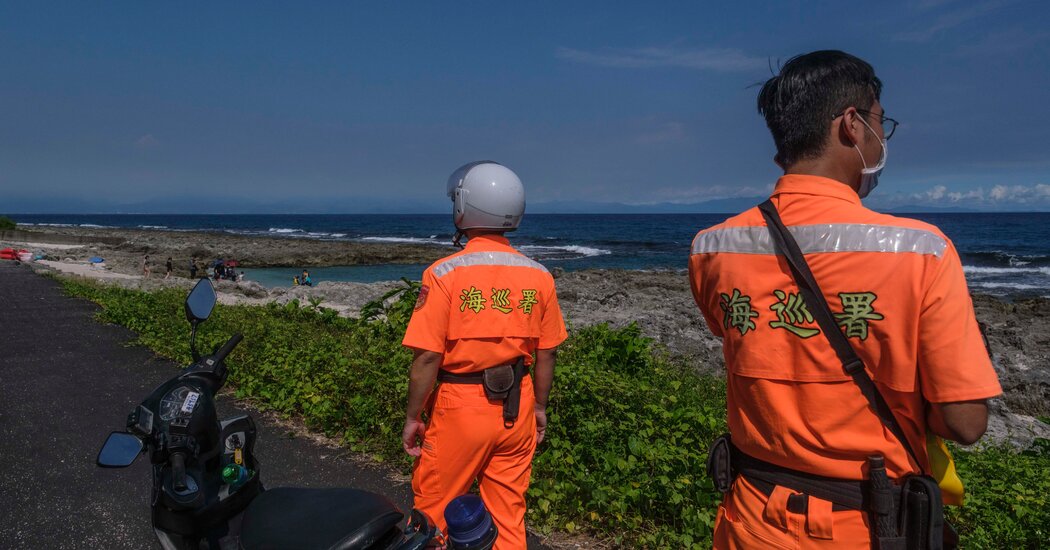 China’s military continued on Saturday to menace Taiwan with a series of drills, a show of force intended not only to intimidate Taiwan and the United States, but also to appease a domestic audience that had seemed disappointed by what it perceived as an insufficiently bellicose posture.

In what has been as much a series of propaganda exercises as military ones, China over the past few days has threatened territory that Taiwan considers its own more directly than ever before. During the drills, announced in response to House Speaker Nancy Pelosi’s trip to Taiwan earlier this week, Chinese missiles have landed in the waters to the north, south and east of Taiwan, and dozens of military planes have repeatedly crossed the informal median line in the Taiwan Strait that divides the island from the mainland. Taiwan’s defense ministry said on Saturday that Chinese military aircraft and ships in the strait appeared to be simulating an attack on the main island of Taiwan.

Chinese state media covered the exercises breathlessly, and the response from much of Chinese social media was ecstatic. On Weibo, a Twitter-like social media platform, several of the top trending topics were about the military exercises. A hashtag about China having the total ability to compel reunification with Taiwan, started by the official People’s Daily, had been viewed more than 500 million times. Another hashtag, “What China says, it does,” had more than 50 million views.

The reaction was a marked departure from the public’s initial evaluation of China’s response to Ms. Pelosi’s trip, which she had said was intended to show support for Taiwan’s vibrant democracy. When she landed in Taiwan on Tuesday night, becoming the highest-ranking American official to visit the island in 25 years, many Chinese social media users could not contain their outrage and embarrassment that China had not done more to stop her.

Chinese officials had repeatedly promised “serious consequences” if she visited. Some state media figures had gone as far as to predict military action to prevent her from landing.

When such extreme steps did not materialize, with China instead announcing the military drills and issuing a series of condemnations, nationalist fervor turned to shame. Many said they were embarrassed of their military and their government.

But by Saturday, the tide appeared to have turned. As official media shared photos of a Chinese soldier surveying a Taiwanese warship through binoculars, and emphasized the “unprecedented” nature of China’s countermeasures, some users said they had been wrong to doubt their country. “I bow to the motherland in apology for my rude comments on the 2nd,” the night of Ms. Pelosi’s arrival, said one Weibo comment that was liked more than 90,000 times.

It is hard to judge the extent to which public opinion has actually changed, given China’s extensive internet censorship. But the narrative adopted by state media made clear that officials saw the need to manage the public disappointment, said Luwei Rose Luqiu, an assistant professor of journalism at Hong Kong Baptist University who studies Chinese propaganda.

“The propaganda department failed to avoid creating unrealistic expectations among the Chinese public,” she said. As a result, “the official media and some officially endorsed opinion leaders began to come out to cool down the situation.”

The official swagger about the exercises reflected the fact that the current military drills are an escalation from previous similar ones. Several of the zones that China designated for this week’s exercises are closer to Taiwan than areas announced during the Taiwan Strait crisis in the mid-1990s, which also involved China firing missiles around the island. Some of the missiles this time landed in waters that Japan claims as its own, leading Japan’s prime minister to call for an “immediate halt” to the drills.

The Chinese military’s Eastern Theater Command, which encompasses Taiwan, said in a statement on Saturday that it was testing its capabilities for land and sea assault.

China claims Taiwan as its own territory, and China’s leader, Xi Jinping, has promised an eventual reunification, through force if necessary.

State media has indicated that the actions could mark a new pattern of more regular and more aggressive incursions. The Global Times, a state-run tabloid, said in an editorial on Friday that the work of promoting reunification had “entered a new stage.” On Chinese state television on Saturday, Meng Xiangqing, a professor at National Defense University, said that the military’s actions could become normalized.

China also said on Friday that it would cancel or suspend talks with the United States on areas including climate change and military coordination, which some analysts said increased the chances of a miscommunication spiraling into a full-fledged crisis.

The United States, Taiwan and other governments have accused China of overreacting.

But in some ways, the apparent shift in public opinion could be attributed more to successful Chinese propaganda than to the actual intensity of the drills, said Chong Ja Ian, an associate professor of political science at the National University of Singapore, who studies nationalism and Chinese foreign policy.

Though the current exercises were on a larger scale and closer to Taiwan than usual, the Chinese military has been stepping up its incursions into Taiwanese-claimed territory for years, he said. And China could have gone further, for example by starting the exercises while Ms. Pelosi was still in Taiwan, or by causing more disruption to U.S. and Japanese military activity in the region, he added.

“So if there is a view that P.R.C. action has been sufficiently strident, this would owe no small part to the domestic messaging of P.R.C. state-controlled media,” Professor Chong said, using the acronym for the People’s Republic of China.

It is clear that Chinese officials have worked in recent days to temper the public disappointment, casting the government’s response as simultaneously unwavering and forceful, and carefully calibrated. A spokeswoman for the foreign ministry, Hua Chunying, said the Chinese people were “rational” patriots, a line soon adopted by many state media outlets and nationalist commentators. One widely shared article, published by the propaganda arm of the Zhejiang Province government, urged the public to consider “the most effective play to solve the Taiwan issue,” adding that history would not be made overnight.

Some disappointed voices remain online. Many pointed out that though they were now being tarred as irrational, it was officials’ aggressive language that had egged them on in the first place.

But many of those voices are in turn being attacked by other commenters, who accuse them of being pro-American or undermining faith in the government. Many of those accusatory comments have used similar tones or wording, raising the possibility that they were officially organized rather than organic, Professor Luqiu said.

“The propaganda department believes that public opinion can be controlled through censorship and technology, such as manipulating online traffic and trending topics,” she said. As a result, the disillusioned voices might become less visible.

But below the surface, “the damage,” she added, “was inevitable.”