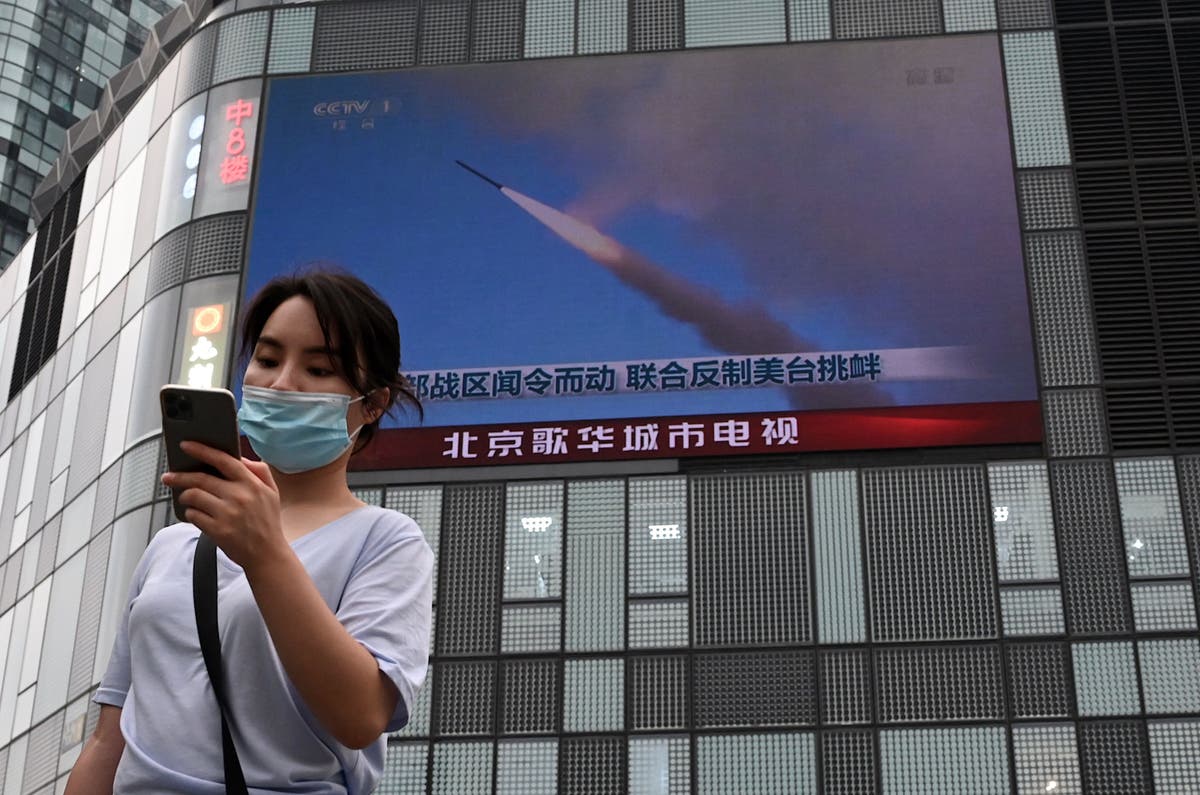 China flew 22 planes into Taiwanese airspace, the defence ministry in Taipei claimed on Thursday as tensions escalated following the visit of Nancy Pelosi to the island Beijing regards as its own.

Taipei said it scrambled jets to warn away the Chinese fighter aircraft that crossed the Taiwan Strait median line into its air defence zone, and also said troops fired flares late to drive away four drones that flew above the area of its Kinmen Islands, off the southeastern coast of China.

It said missiles fired by China flew high into the atmosphere and constituted no threat to it, responding to public concern about whether they passed over the main island of Taiwan.

Taiwan’s claims came as it was revealed that Beijing had launched five ballistic missiles into the waters that Japan considers to be its exclusive economic zone (EEZ), the Japanese defence minister says, adding that this is the first time such an incident has ever taken place.

US House Speaker Nancy Pelosi is due to travel to Japan after visiting Taiwan and South Korea.

It was her trip to Taiwan that infuriated China and led Beijing to launch military exercises around Taiwan, in what could be the biggest of their kind since the mid-1990s.

The five missiles that landed in Japanese territory were from those exercises,The Japan Times said.

“This is a grave issue that concerns our country’s national security and people’s safety,” Mr Kishi told a hastily organised news conference.

China’s exercises, due to run until Sunday, included live-firing into the waters to the north, south and east of Taiwan, which Beijing claims as its own.

The operation echoes the last major Chinese military drills aimed at intimidating Taiwan’s leaders and voters, in 1995 and 1996.

The Japanese zone stretches 200 nautical miles from the outer limits of the country’s territorial seas. North Korean missiles have fallen within a different part of Japan’s EEZ in the past, including several in a flurry of launches earlier this year.

Hours earlier, China said a planned meeting between its foreign minister and Japan’s had been cancelled due to China’s displeasure with a G7 statement urging Beijing to resolve Taiwan tensions peacefully.

Taiwan has put its military on alert and staged civil defence drills, while the US has numerous naval resources in the area.

Taiwan’s defence ministry called the Chinese drills “unreasonable actions in an attempt to change the status quo, destroy the peace and stability of the region”.

China views Taiwan as a breakaway province to be annexed by force if necessary. It considers visits to Taiwan by foreign officials as recognising its sovereignty.

“Today the world faces a choice between democracy and autocracy,” Ms Pelosi said in a short speech during a meeting with Taiwanese president Tsai Ing-wen. “America’s determination to preserve democracy, here in Taiwan and around the world, remains iron clad.”