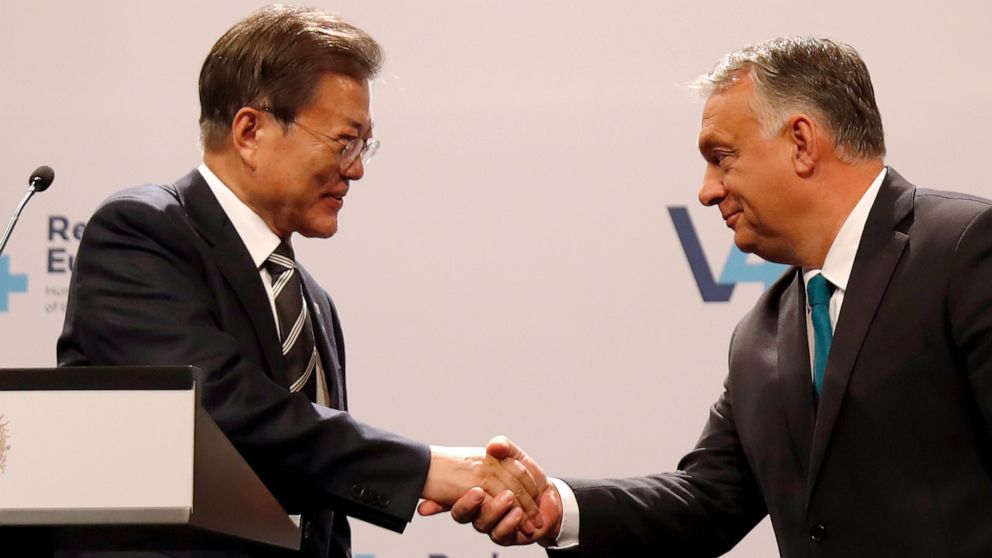 Hungarian Prime Minister Viktor Orban, who was the host of the prime ministers of the Visegrad Group of four Central European nations, said at a joint news briefing that the potential rail investment was the “largest common enterprise of the V4 countries” — a pact which includes Hungary, Slovakia, the Czech Republic and Poland.

“South Korea has developed technology in this field, and a south to north travel corridor in Europe cannot be achieved if the (V4) capitals are not connected with a rapid train,” Orban said, adding that the rail investment aims to reduce travel time on the 800-kilometer (500-mile) line from 12 hours to five.

“We really hope that South Korean industry will be interested in this development,” Orban said.

The summit of V4 leaders came as Moon neared the end of a nine-day tour of Europe, where he earlier attended the Group of 20 summit in Rome and U.N. climate summit COP26 in Glasgow, Scotland.

At the media briefing in Budapest, each of the leaders emphasized growing bilateral trade relations between South Korea and the V4, which Orban said had increased 40% in the last five years and reached a record of $20 billion last year.

Moon called the V4 a “newly emerging manufacturing hub in Europe,” and noted that the group is the second-largest trading partner and largest investment destination for South Korea in the European Union.

The manufacture of batteries for electric vehicles is the “main driver of our bilateral cooperation that is growing stronger,” Moon said, adding that South Korea would take a “leading role” in the development of transport, energy and infrastructure in the V4 countries.

Polish Prime Minister Mateusz Morawiecki, who was also present at the summit, said that South Korea should “look at the V4 as the most important partner in the EU.”

More than 30% of total South Korean exports to the EU end up in the V4 countries, Morawiecki noted, adding that “we are open economies and we expect our partners to be open as well.”

Czech Prime Minister Andrej Babis urged South Korea to bid on a project to renew a nuclear power plant in Dukovany, Czech Republic, saying that the East Asian nation has “excellent technology” and that the two countries had already conducted “quite intensive talks.”

Prime Minister Eduard Heger of Slovakia said that the V4 aims to develop further cooperation with South Korea in the battle against COVID-19, including the sharing of testing equipment, vaccines, ventilators and other medical devices.