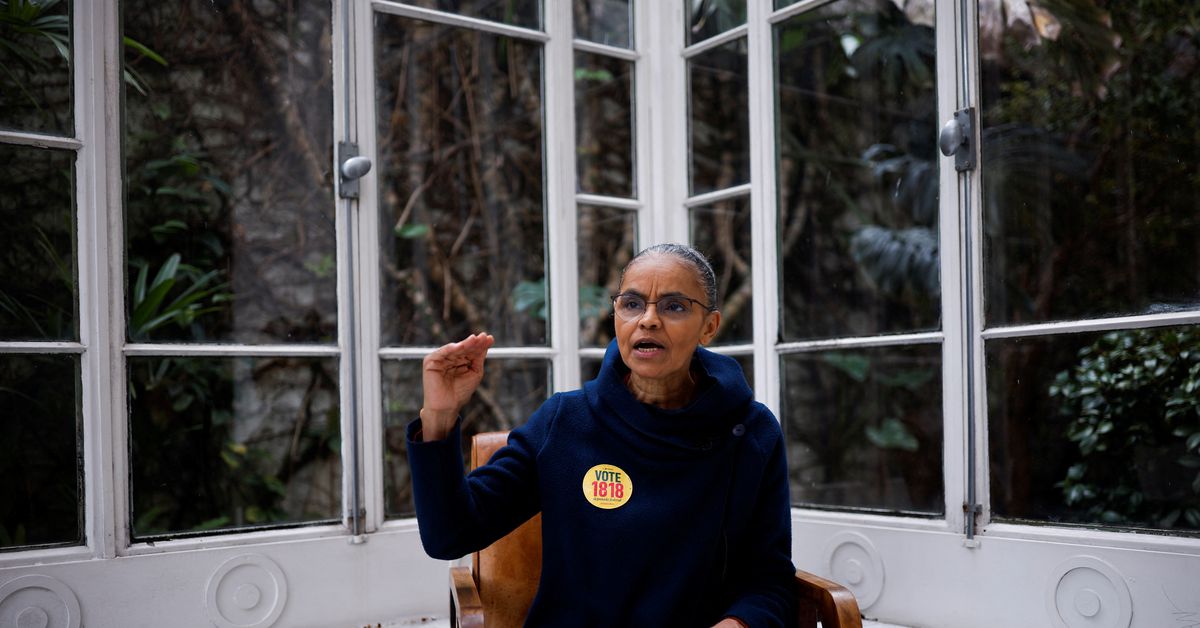 SAO PAULO, Sept 23 (Reuters) – Prominent Brazil environmentalist Marina Silva, who was environment minister under ex-President Luiz Inacio Lula da Silva before breaking with his party, told Reuters she is throwing her full support behind his campaign and did not rule out a role in government if he wins a third term.

Silva resigned from Lula’s government in 2008, upset at his support for major infrastructure projects in the Amazon. Their reconciliation is a high-profile endorsement to shore up his center-left coalition ahead of an Oct. 2 vote.

Her support for Lula also shows how even environmentalists skeptical of his ties to Brazilian agribusiness have closed ranks behind him, in an urgent push to change policies that have sent deforestation soaring under President Jair Bolsonaro.

Silva implemented environmental policies under Lula that helped to dramatically reduce destruction of the Amazon, but she joined a chorus of green critics upset with major infrastructure projects in the rainforest like the Belo Monte hydropower dam.

Even with that mixed record, Lula strikes a dramatic contrast with Bolsonaro, who has sharply scaled back enforcement of environmental laws in the Amazon, while calling for more mining and farming on protected lands. Deforestation of Brazil’s rainforest has climbed to a 15-year high on his watch.

In an interview on Thursday, Silva, a three-time presidential candidate who once drew fierce criticism from Lula’s leftist Workers’ Party (PT), said “zeroing” deforestation in the Amazon was entirely within reach, a goal even more ambitious than Lula’s stated target of “net zero” deforestation.

“It’s perfectly possible to return to zero deforestation, reviving a plan that already worked, updating that plan, putting the budgets and teams back together, strengthening our enforcement, monitoring and management systems,” said Silva, a native of the isolated, rainforest state of Acre.

Last week, Silva publicly endorsed Lula at an event where he committed to a series of policy proposals, including a national authority coordinating the government’s work on climate change.

Asked if she would consider accepting such a “climate czar” role, Silva left the door open.

“This is a decision for the president of the republic,” she said. “In this moment, talking about ministries before winning is exactly what we don’t have to do.”

Lula’s campaign has not been shy about environmental initiatives they are looking to implement.

Reuters reported in August that his representatives were reaching out to Indonesia and the Democratic Republic of the Congo in a bid to present a united front of tropical rainforest nations at this year’s United Nations climate talks.

His advisers have also previewed a policy of subsidizing loans to farmers who agree to meet certain targets related to sustainable agriculture practices.

Lula has built a strong lead over Bolsonaro in most. If neither candidate wins a majority of votes on Oct. 2, they will face off in a second-round vote on Oct. 30.