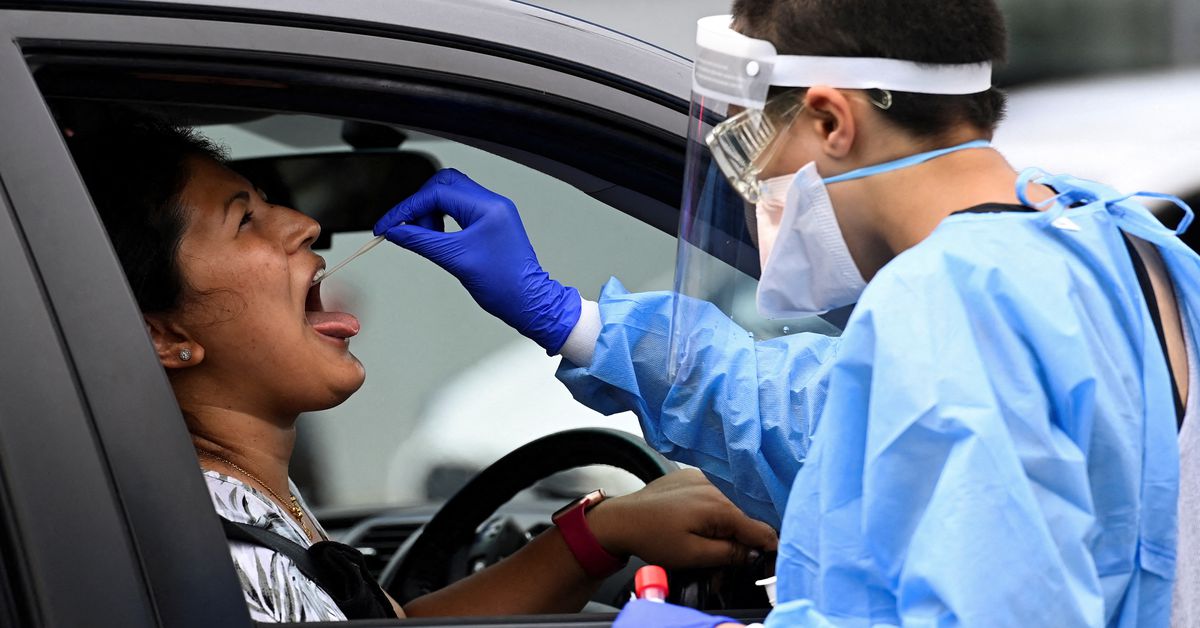 A woman takes a test for the coronavirus disease (COVID-19) at a testing centre in Sydney, Australia, January 5, 2022. REUTERS/Jaimi Joy

SYDNEY, Jan 15 (Reuters) – Australia has likely neared the peak of its Omicron wave, authorities said on Saturday, but warned daily infections will linger near record levels for “the next few weeks” after more than 100,000 cases were reported for a fourth straight day.

Having limited the spread of the coronavirus through tough restrictions earlier in the pandemic, Australia is now suffering record caseloads from the Omicron variant. Most parts of the country have shifted to a strategy of living with the virus as they reached higher vaccination rates.

“We are not through it yet and I think there are still going to be large number of cases diagnosed in Australia over the next few weeks,” Chief Health Officer Paul Kelly told a news briefing, referring to the Omicron outbreak.

But modelling from some states “leads me to believe that we are close to the peak of this wave in terms of cases,” he said.

Infections have dipped over the last three days while the rise in hospitalisations in worst-hit New South Wales, Australia’s most populous state, has slowed slightly, official data showed.

Most states are battling record hospitalisations during the Omicron wave, with authorities saying unvaccinated younger people forming a “significant number” of admissions in Australia.

“We are seeing an epidemic of the unvaccinated in young people, we are seeing that in intensive care admissions,” Kelly said.

Australia is among the most heavily vaccinated countries against COVID-19, with more than 92% of people above 16 double-dosed, and with a booster drive picking up pace.

A medical exemption for tennis star Novak Djokovic from vaccination was met with uproar in the country.

The federal government of Prime Minister Scott Morrison, fielding criticism for his handling of the Omicron wave in an election year, on Friday cancelled Djokovic’s visa for the second time over COVID-19 entry rules. Djokovic is seeking a court ruling to stop his deportation.