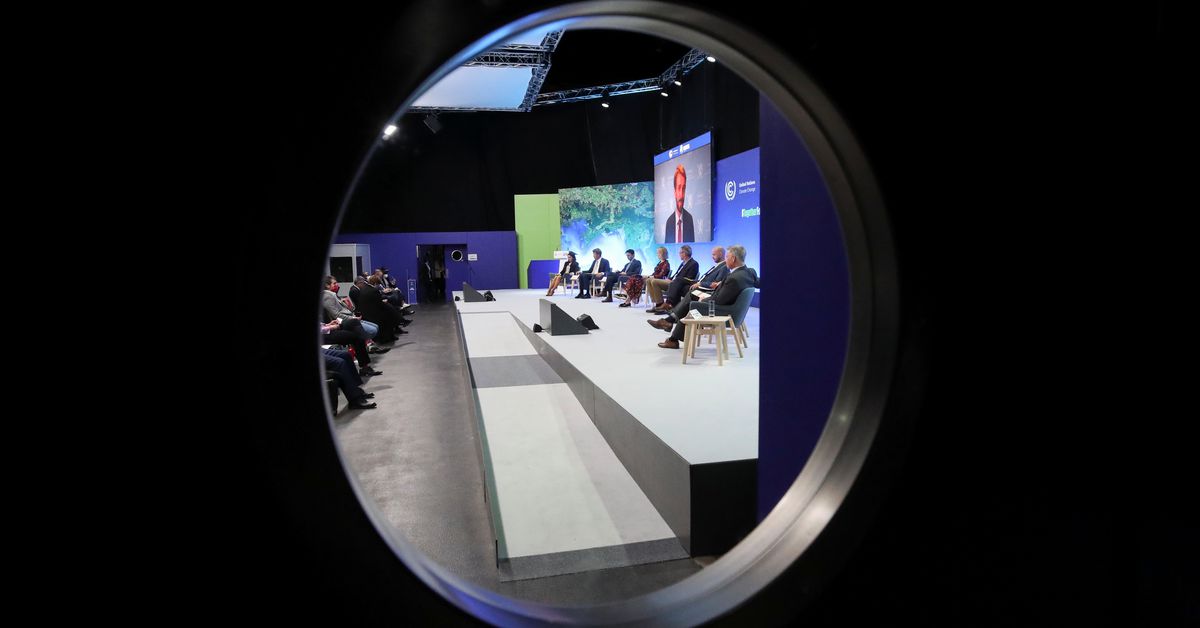 A conference is seen through a window at the media centre during the UN Climate Change Conference (COP26), in Glasgow, Scotland, Britain, November 4, 2021. REUTERS/Yves Herman

GLASGOW, Nov 4 (Reuters) – Early in the pandemic, when some national leaders chose to trade blame rather than cooperate, cities around the world were already swapping expertise on social distancing management or mass virus-testing.

As countries gathered at the United Nations COP26 climate conference in Glasgow this week hammer out pacts and issue pledge after pledge to cut greenhouse gas emissions, city mayors say they are increasingly using their own networks to tackle climate change, bypassing national politics to kickstart action on the ground. read more

Cities are both source and victim of the climate crisis. Home to over half the world’s population and rising, they create 75% of global CO2 emissions, notably from transport and buildings, the UN Environment Programme (UNEP) estimates.

Garcetti said in an interview that he was under no illusion that action at local government level could ever be a substitute for the global emission-cutting pacts needed to avert a climate catastrophe.

Instead, the aim was for town halls to leverage their often chunky resources and mandates – from levying local taxes to the policing of building regulations and waste management – to help make sure that those pacts actually lead to results, he said.

Launched in 2005 by 18 big cities, C40 gained momentum after Donald Trump pulled the United States out of the 2015 Paris Agreement on curbing emissions. At an event on the sidelines of COP26 it announced it now includes 1,049 towns covering over 700 million citizens and a quarter of the global economy.

Members have to prove they are contributing to the overall goal of halving net carbon emissions by the end of the decade en route to net-zero by 2050 – the deadline scientists say must be met to limit global warming to 1.5C above pre-industrial levels.

Membership gets them access to training and technical support to develop climate plans, the chance to secure C40 funding and the encouragement and example of peers to take matters into their own hands at local level.

Dhaka North Mayor Atiqul Islam, whose city expects its population to double to 50 million over a decade as rising sea levels uproot millions of Bangladeshis, is doing exactly that by launching a green bond to finance work on water resources.

“If am depending on the government, it will take much more time,” Islam said ahead of the bond’s Nov. 4 launch in London.

Taxes are another tool for city authorities to bring about change. Islam, for example, last year offered a 10% rebate on a local levy to anyone who helped green his city by planting a rooftop garden.

Perhaps the boldest example of city power this year was London mayor Sadiq Kahn’s move to extend an ultra-low emission zone (ULEZ) charge to four million Londoners and their vehicles despite loud criticism by opponents in power at national level.

“It was too important to delay further – literally a matter of life over death,” Kahn said of a policy designed to clean up London’s polluted air and also cut emissions.

Stockholm mayor Anna König Jerlmyr told the event her city’s schedule for a fossil fuel-free transport network was ahead of national targets, while Bogota mayor Claudia Lopez described a C40-backed plan to build a transport network for the sprawling, car-clogged Colombian capital virtually from scratch.

Such examples suggest town halls can sometimes push ahead on policy faster than national leaders, illustrated by how U.S. President Joe Biden’s domestic climate agenda has been stymied by Joe Manchin, a senator from a coal-producing state. read more

Often, they have no choice but to get on with it themselves.

“There is a huge gap between what is necessary in terms of the spend in investing in net-zero resilience and what is currently happening,” she told another event with city mayors.

And increasingly, one motivation for mayors and would-be mayors alike is self-interest: surveys show that voters are increasingly worried about how climate change will affect their cities.

As Laila Kildesgaard, Danish local government director, put it: “It is not possible to run for mayor in Denmark if you don’t have a (climate) plan.”