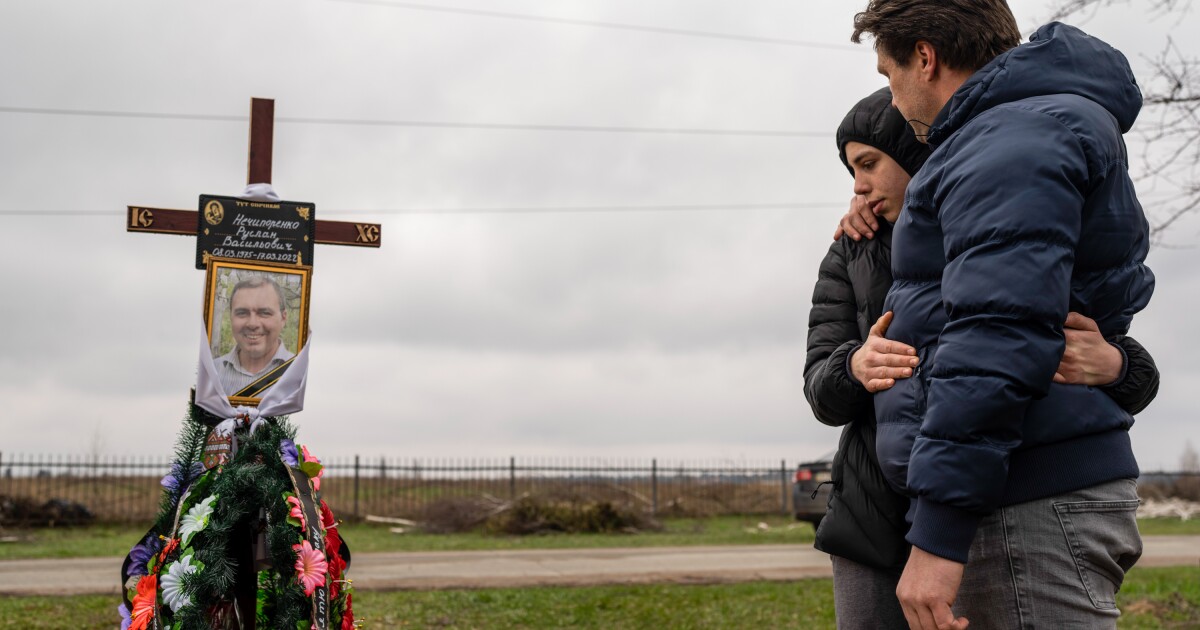 As Finland’s leaders dealt him a blow by announcing their support for joining NATO, Russian President Vladimir Putin reaffirmed his determination to maintain Moscow’s sway over eastern Ukraine as Russian missiles pounded the area.

Putin, in a message released by the Kremlin on Thursday, offered his support to Leonid Pasechnik, the head of pro-Russia separatists in the self-proclaimed Luhansk People’s Republic, part of eastern Ukraine’s Donbas region.

“I am sure that through our joint efforts we will defend the independence, sovereignty and territorial integrity” of the Luhansk republic, Putin said, as his war on Ukraine began its 12th week.

The Russian leader’s message was backed by a torrent of Russian airstrikes and artillery barrages along the 300-mile-long eastern battlefront, including on a steel mill where the last pocket of Ukrainian military resistance remains in the strategic southeastern port city of Mariupol.

The fighting came amid the dramatic announcement by Finland’s president and prime minister of their support for joining NATO, paving the way for an expansion of the U.S.-led military alliance that Putin partially blamed for his decision to invade Ukraine.

Finland, a historically neutral country that shares an 830-mile land border with Russia, is expected to be joined soon by Sweden in seeking membership in the 30-member security pact.

Kremlin officials warned that they saw Finland’s move to join NATO as a threat. “Another expansion of NATO does not make our continent more stable and secure,” Kremlin spokesman Dmitry Peskov told reporters, according to the Interfax news agency. Joining NATO would make Finland “part of the enemy” and “a target — or a possible target — for a strike,” the deputy Russian ambassador to the United Nations, Dmitry Polyanskiy, said in an interview.

The addition of the two Nordic states to NATO would underscore how badly Putin has miscalculated the world’s response to his invasion of Ukraine, which has failed to achieve its initial military objectives, prompted Europe to begin weaning itself off Russia’s most valuable export — fossil fuels — and compelled nonaligned states to pick sides.

“This is monumental,” said Aglaya Snetkov, a Russia expert and lecturer in international politics at University College London. “This reverses decades of foreign policy.

“Putin’s initial plan of drawing a line in the sand between Russia and NATO and reversing the latter’s expansion has spectacularly backfired,” she added. “This is precisely what Russia did not want: NATO expansion.”

The Kremlin responded by saying that Putin had already set in motion a strengthening of Russian defenses along its western flank.

But Snetkov said Moscow would probably struggle to mount a significant response if Finland and Sweden joined the North Atlantic Treaty Organization, given the vast deployment of Russian forces in Ukraine.

“It is bogged down in Ukraine, has pulled its troops from its other borders,” Snetkov said of Russia. “Realistically, what can it do? If it doesn’t respond, which I think is likely, this shows yet again the weakness of Russia and that it’s full of empty threats.”

More than a dozen Russian armored vehicles were destroyed crossing the Seversky Donets River near the village of Bilohorivka in Luhansk, according to the Ukrainian Ministry of Defense, which posted pictures on Facebook of charred tanks and the remnants of two pontoon bridges. The photos could not be independently verified.

The village was the target of a Russian strike over the weekend that hit a school-turned-shelter, killing about 60 civilians, according to Ukrainian President Volodymyr Zelensky.

Since Russia invaded on Feb. 24, its troops have destroyed 570 healthcare facilities and 101 hospitals, Zelensky said in his nightly address to his nation.

“Russia’s strategic defeat is already obvious to everyone in the world and even to those who still continue to communicate with them,” Zelensky said. “Russia simply lacks courage to admit it so far. They are cowards. And they are trying to hide the truth behind missile, air and artillery strikes.”

The Ukrainian military said Thursday morning that it had repulsed nine Russian attacks over the last 24 hours in Luhansk and Donetsk, while admitting that Russian advances in the region had achieved “partial success.” Four Ukrainian civilians were reported dead and five more were injured in the Donetsk region, according to the regional governor, Pavlo Kyrylenko.

“All Russians will be held accountable for their crimes!” Kyrylenko posted on the app Telegram.

Russian airstrikes continued to rain down on the Azovstal steel works in Mariupol, where the city’s last defenders have been holed up for weeks. The dire situation prompted Kyiv to offer the release of Russian prisoners of war in exchange for the safe evacuation of injured soldiers trapped inside the southern port city’s mill.

Negotiations were ongoing Thursday, said Ukrainian Deputy Prime Minister Iryna Vereshchuk, but none of the options discussed so far was “ideal.”

The defenders, members of the Azov regiment, have refused to surrender despite heavy bombardment and quickly depleting sources of food, water and medicine.

Only a fraction of Mariupol’s 400,000 residents are believed to remain in the shattered city, which Mayor Vadym Boychenko said was reduced to a “medieval ghetto.”

Many of the city’s evacuees have fled about 120 miles northwest to the town of Zaporizhzhia, which was hit by Russian shells and grenades, the Ukrainian military said Thursday.

More than 8 million people are now displaced within Ukraine, with nearly half fleeing homes in the country’s east, according to the International Organization for Migration.

Meanwhile, more than 6 million have fled Ukraine since Russia invaded, according to the Office of the United Nations High Commissioner for Refugees.

Ukraine’s human rights chief alleged that about 3,000 Mariupol residents were being held in prisons controlled by pro-Russia separatists in eastern Ukraine. Lyudmyla Denysova alleged on social media that some of the detainees were being interrogated under coercion and enduring terrible living conditions.

Ukraine’s claims were backed up Thursday by a U.S. official who told the Organization for Security and Cooperation in Europe Permanent Council that Russian forces had “forcibly” relocated at least several thousand civilians, subjecting them to “brutal interrogations” in Russian “filtration centers.” Russia has also evacuated tens of thousands civilians to Russia or Russia-controlled territory.

“Numerous eyewitness accounts indicate that ‘filtering out’ entails beating and torturing individuals to determine whether they owe even the slightest allegiance to the Ukrainian state,” said Michael Carpenter, OSCE’s U.S. ambassador. “These actions amount to war crimes.”

Three people were killed and 12 injured after Russians launched missiles at a local school, a college dormitory and private homes in Novgorod-Siversky, a city in the northern region of Chernihiv, Ukrainian military officials said Thursday.

The United Nations’ top human rights representative Thursday blamed the Russian military and its proxies for most of the war’s civilian deaths.

“According to our information, while such incidents can be attributed to both parties to the conflict, most of these casualties appear attributable to the Russian armed forces and affiliated armed groups,” High Commissioner for Human Rights Michelle Bachelet said at a special session of the Geneva-based U.N. Human Rights Council.

She said the “vast majority” of the casualties were caused by explosive weapons, including heavy artillery and missiles.

The council is expected to vote on a resolution repeating its demand “for the immediate cessation of military hostilities against Ukraine.” The U.N. General Assembly suspended Russia from the human rights council last month amid allegations of atrocities by Russian forces in the suburbs of the Ukrainian capital, Kyiv, where bodies of civilians bearing signs of torture and summary execution have been uncovered.

Russia’s determination to continue its war against Ukraine has spooked other neighboring countries, including Finland, a country of 5.5 million people, which had up to now refrained from joining NATO so as to not provoke Moscow. Putin has long viewed NATO’s expansion, particularly its addition of former Eastern Bloc nations such as Poland and Romania after the collapse of the Soviet Union in 1991, as an existential threat to Russia.

Attitudes in Finland toward NATO changed after the Russian invasion of Ukraine, which sparked the largest conflict in Europe since World War II. Polls show that 76% of the population now supports joining the defense pact, a dramatic swing from late 2017 during the country’s centennial, when only 19% favored membership.

“The Finnish population looked at Ukraine and said, ‘Russia could do this to Finland,’” said Charly Salonius-Pasternak, a security expert at the Finnish Institute of International Affairs. “At the same time, there’s the realization that Russia talks about using nuclear weapons in a way Finland cannot address. Finland has no deterrence for nuclear weapons. The only way to do that is to become a NATO” member.

Germany, too, has changed its security calculus, pledging a $100-billion boost in military spending to reach targets set by NATO that it had failed to meet for years.

Ukrainian Foreign Minister Dmytro Kuleba, buoyed by Germany’s’ shifting position, called on German companies to pull out of Russia and relocate to Ukraine.

“As Russia keeps committing heinous atrocities in Ukraine, revenues of foreign companies still doing business in Russia are stained with Ukrainian blood,” Kuleba posted on Twitter. “I urge German businesses to pull out of Russia and relocate to Ukraine. This will be a sincere contribution to peace in Europe.”

But European officials will need more than just U.S. support to bring Moscow to heel, which is one reason why European Commission President Ursula von der Leyen was in Tokyo on Thursday meeting with Japanese Prime Minister Fumio Kishida. Her visit followed one by Finnish Prime Minister Marin on Wednesday.

Von der Leyen and Kishida called on China — which has steadfastly refused to criticize Russia over Ukraine — to do more to exert influence on the Kremlin to bring an end to the war.

“Russia’s invasion of Ukraine is not just a matter for Europe, but it shakes the core of the international order, including Asia. This must not be tolerated,” said Kishida, whose government has joined Western sanctions against Russia.

King reported from Lviv, Pierson from Singapore and Jarvie from Atlanta.