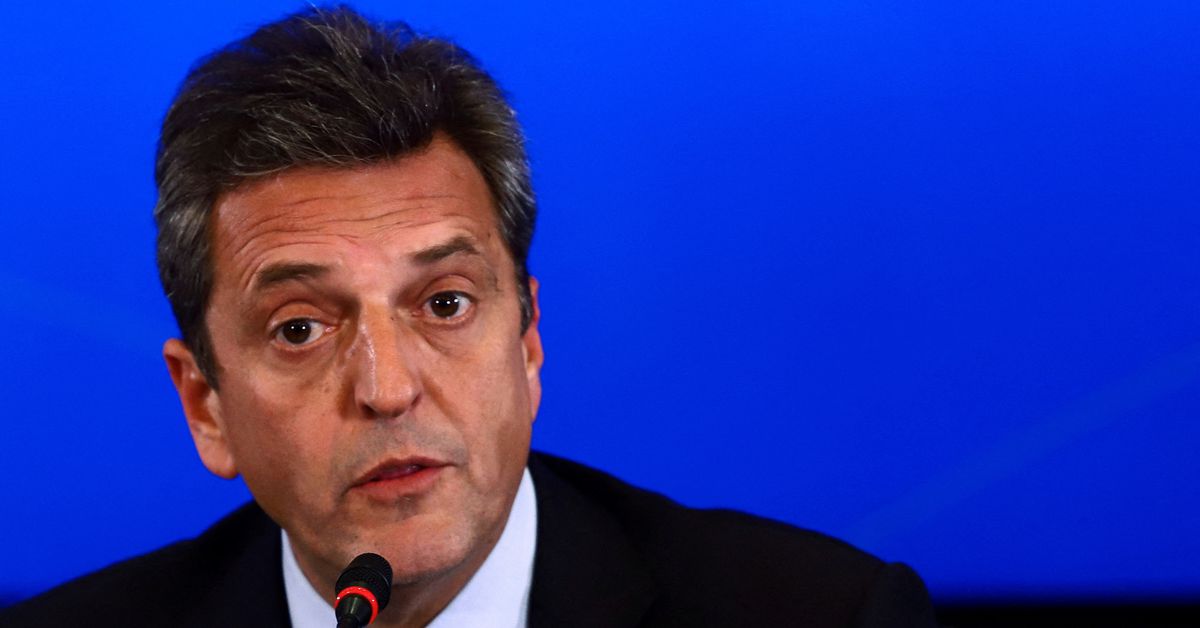 Argentina’s new Economy Minister Sergio Massa talks to the media after being sworn in, at the Economy Ministry in Buenos Aires, Argentina, August 3, 2022. REUTERS/Matias Baglietto

BUENOS AIRES, Aug 5 (Reuters) – Asked about Sergio Massa, Argentina’s new “superminister” for the economy, many Argentines perceive him as an opportunistic politician with limitless ambition.

But Massa’s political acumen, honed over four decades of party-hopping activism, is also widely seen as key to rescuing Argentina’s economy, which has been ravaged by sky-high inflation, crippling debt as well as chronic overspending.

Earlier this week, the 50-year-old lawyer and former congressional leader for the ruling center-left Peronist coalition was sworn in as economy chief by President Alberto Fernandez. Massa’s move is widely seen as a stepping stone to a future presidential run, but only if he can quickly show results. read more

To do just that, the newly dubbed “superminister” insisted on broad powers before accepting the daunting task, including control over the agriculture, production and trade secretariats, which have previously acted independently.

“He’s a very capable person, exceptionally prepared. But he’s also a huge pragmatist, and that’s why he decided to form an alliance with the government,” said legislator Margarita Stolbizer.

In 2017, Stolbizer joined forces with Massa in a Senate run against leftist Cristina Fernandez de Kirchner, the country’s powerful vice president and former president, who is now a key Massa backer.

His resourcefulness gave him what his predecessors were unable to obtain: the thumbs-up from the vice president to carry out more orthodox cost-cutting policies, which Fernandez de Kirchner had spurned when proposed by others in the past.

His resourcefulness gave him what his predecessors were unable to obtain: the thumbs-up from the vice president to carry out more orthodox cost-cutting policies, which Fernandez de Kirchner had spurned when proposed by others in the past.

Massa’s backing by all the ruling coalition’s warring factions gives him a leg up compared with his immediate predecessors, longtime Economy Minister Martin Guzman as well as his short-lived successor, Silvina Batakis, according to political analyst Carlos Fara.

“The crisis has made everyone more pragmatic, and that allows Massa to propose things that surely wouldn’t have been accepted from Batakis and even less so from Guzman,” said Fara.

On Wednesday, Massa announced a series of austerity measures, plus moves designed to boost dwindling foreign reserves, during his first day on the job. read more

Massa began his political career in the late 1980s in the conservative Union of the Democratic Center party.

From 2002 to 2007 he was a Peronist government official and later mayor of Tigre, a suburban area outside Buenos Aires where he lives. He then became chief of staff of then-President Fernandez de Kirchner, but resigned after less than a year.

In 2013, Massa founded a new party called the Renewal Front, which eventually joined forces with other Peronist factions to create a center-left group that went on to defeat ex-President Mauricio Macri’s coalition in the 2019 election.

Over the past decade, Argentina’s rough and tumble politics, amplified by the deepening economic crisis, have taken a toll on Massa’s popularity.

Nearly 55% of people hold a negative view of Massa, while about 63% say they would never vote for him if he ran for president, according to a recent survey from Management & Fit image consultancy.

As the country limps to next year’s presidential election, Massa will be put to the ultimate test. A successful performance as superminister will be crucial for his own future political prospects – not to mention vital for the near-term health of South America’s second-biggest economy.

“Massa is so ambitious. He’s dreamed all his life of being president,” said businessman Gregorio Feldman.

“He’ll end up either a superhero or get eaten alive.”