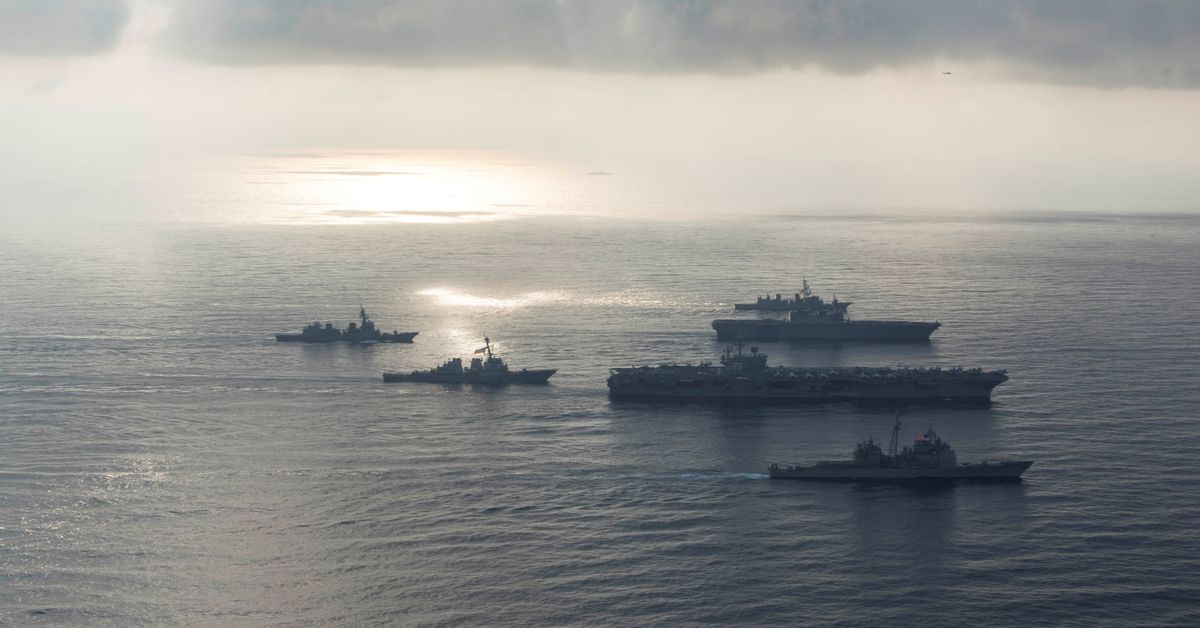 HONG KONG, Aug 5 (Reuters) – The long route of Nancy Pelosi’s Tuesday flight over Borneo to Taipei and a U.S. aircraft carrier’s complex passage through the South China Sea highlight the difficulties U.S. forces now face against a Chinese military keen to flex its muscles over Taiwan.

U.S. military officials repeatedly talk of “routine” patrols to support a “free and open Indo-Pacific” but the realities are increasingly challenging amid the worst Taiwan tensions since 1996, according to diplomats, military attaches and security analysts.

U.S. officials told Reuters this week they did not want to escalate matters with unnecessarily provocative deployments before House Speaker Pelosi – a staunch China critic and the third most senior U.S. politician – landed in Taipei on Tuesday on a U.S. Air Force plane.

And they are keeping to that approach as the Chinese military launches live firing exercises in waters surrounding, and in some bisecting, Taiwan’s territory, they say.

“We can’t control Pelosi’s travel, but we can control how we react,” one defence official said.

The U.S. Indo-Pacific Command in Hawaii did not immediately respond to Reuters’ questions regarding its actions and strategies.

The plane carrying Pelosi and her congressional delegation skirted the South China Sea – and its fortified islands – as it flew from Singapore on Tuesday, taking a longer route over the island of Borneo and eastern side of the Philippines.

“The natural flight path would be over the South China Sea but the place is now bristling with radars, sensors and jamming equipment on China’s island bases, so it is something to avoid in the Pelosi context,” said Singapore-based security consultant Alexander Neill.

“The way things are unfolding we can see the goal here is to avoid unmanaged escalations.”

After building up installations in the disputed Paracel and Spratlys archipelagos, Chinese coast guard vessels, warships and aircraft routinely patrol deep into the maritime heart of Southeast Asia, frequently shadowing U.S. and other navies.

China’s military modernisation in recent decades mean some security analysts say it would be unthinkable for U.S. aircraft carriers to challenge Chinese forces in the seas around Taiwan in the way they did a quarter of a century ago.

Back then, one carrier sailed through the Taiwan Strait as another manouvered close by to end days of Chinese missile launches and military drills as Beijing protested Taiwan’s first direct presidential election.

More than half of the U.S. Navy’s 111 currently deployed battle force ships are now within the Japanese-based Seventh Fleet’s sphere of responsibility that straddles the western Pacific and Indian oceans, according to the tracking by the independent U.S. Naval Institute.

Deploying ships en masse to the Chinese coast is another matter, given China’s inventory of advanced cruise and ballistic missiles and its expansive surface fleet, regional security analysts say.

Some security analysts say it was highly likely U.S. attack submarines were also close to such a formation.

The passage of the Reagan strike group was particularly closely watched by regional security analysts in the days before Pelosi’s mission.

Radio Free Asia last month reported it was due to call in the central Vietnamese port of Danang in July after patrols in the southern South China Sea near China’s fortifications in the Spratlys.

Diplomats familiar with its route said the strike group turned around and instead headed for a five-day stop in Singapore starting July 22.

The move came as China launched exercises between July 16 and 20 surrounding its bases further north in the Paracel islands, east of Danang and covering 100,000 square km, according to statements by local maritime authorities.

Neither U.S. nor Vietnamese officials have commented on the switch, or the reason for it, but a U.S. Navy official told Reuters this week that schedules “often change” without confirmation or notice.

The Reagan later headed through the tight sealanes of the Philippines’ archipelago before reaching waters west of Taiwan, according to an official U.S. naval Facebook page.

Singapore-based security scholar Collin Koh said the passage through the Philippines’ San Bernadino strait by an aircraft carrier was unusual, instead of sailing north between the Philippines and south China coast.

“I think it shows some carefully calibrated deployments, designed to not unnecessarily provoke China even while ensuring they’re moving to where they need to be.”